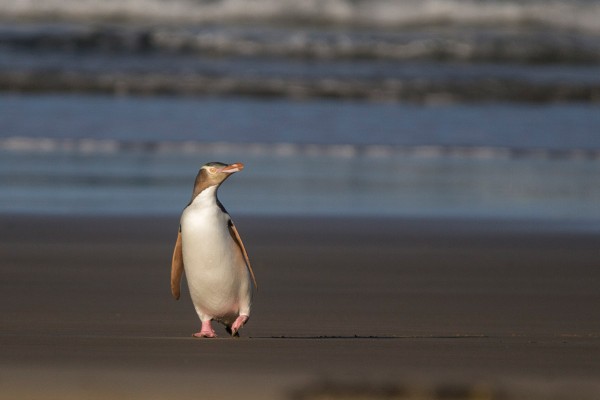 Feathery Friends & Funky Fiends: A guide to finding wildlife in and around Dunedin

Friends, it’s time to see some wildlife other than the stray cats on Leith Street and the cockroaches in your bathroom. Leave North Dunedin, and experience the natural world at its finest. Even David Attenborough reckons you should.

We are surrounded by some incredible ecosystems in Dunedin and this is your guide to finding them. Almost all of these species are taoka (taonga) to Kāi Tahu and many of them are threatened with extinction, so respect and appreciate these steezy beasts without disturbing them or their delicate habitats.

If you live in Dunedin and haven’t been out to the peninsula, you really should take the nearest car, bus, horse, or lime scooter and get there ASAP. At least listen to ol’ mate Sir David Attenborough, who said the peninsula is a “unique and very special place [...] that every visitor to Dunedin should see.”

The Otago Peninsula has some of the best wildlife watching in the country, and is internationally known for its albatrosses, penguins, and sea lions.

Taiaroa Head, at the very tip of the peninsula, is the only mainland breeding colony of toroa (royal albatrosses) in the world. Unless you want to sail to a remote sub-antarctic island, this is your best chance at seeing these giant dorky birds. Taiaroa Head is also an excellent vantage point to see other seabirds or, if you’re lucky, dusky dolphins, orcas, and humpback whales

A short walk down from the albatross colony is Pilot’s Beach. Pilot’s Beach is home to kororā (little blue penguins). These tiny tuxedo-clad comrades are the smallest species of penguin in the world, and you can see them waddle to shore every evening to feed their chicks. Kekeno (New Zealand fur seals) are also common all around the rocks underneath Taiaroa Head.

The stretch of coast from Allan’s Beach to Sandfly Bay is the best spot you’ll find for whakahao (aka rāpoka or New Zealand sea lion) and the incredibly rare hoiho (yellow-eyed penguin). While the more common kekeno are roughly the size and weight of your average breatha, male whakahao can be up to 3.5 metres long and weigh as much as 1800 cans of Billy Mavs i.e. 450 kg. These blubbery beasts are the rarest species of sea lion in the world, but the Otago population is steadily increasing. Chances are, if you go to the East coast of the peninsula, you will see at least a few.

Like whakahao, hoiho are also larger and more endangered than their kororā cousins. Despite their stylish waddle and Colour Pop yellow eyeliner, hoiho have declined by 75% on the Otago peninsula since the 90s. Sandfly Bay is one of the last places you can consistently see them. There are wooden huts to hide in to watch the penguins come ashore without disturbing them. Hooper’s Inlet, between Sandfly Bay and Allan’s Beach, is also a good location to spot spoonbills, easily identifiable with their funky spoon-shaped bills.

Another location of the peninsula worth mentioning are The Pyramids. Located at Okia reserve, these are gigantic basalt columns shaped exactly like, well, pyramids. They’re basically just funky hills that you can walk up, but the surrounding reserve hosts interesting wetland and sand dune ecosystems.

Did aliens make the Otago Peninsula Pyramids? Critic cannot say for certain. Are they pretty cool either way? Yes they are.

Andersons Bay inlet is that little body of water next to Bayfield Park in South Dunedin. If you stop by on the right day, you might see spoonbills, oystercatchers, or whakahao. Otherwise, you can make friends with all of the dogs being taken for walks.

Slightly further South, beaches like Second Beach at St Clair are excellent spots to see aurora australis, the Southern lights. Although the lights of the city can block visibility, if there is a geomagnetic storm on a clear night it is well worth waiting out in the cold with your buddies. Check online aurora forecasts or Facebook groups: anything above a 5Kp is considered a geomagnetic storm.

Ross Creek is a patch of native bush where the city and the Leith Valley meet. It hosts a cute waterfall as well as the Ross Creek Reservoir, a picturesque artificial lake that holds the equivalent of 800 million cans of Billy Mavs. Some of the usual Dunedin birdlife is abundant here, like tui, kererū and pīwakawaka (fantail). You are also likely to spot some of the less seen species, including shining cuckoos, ruru (morepork), and tītipounamu (rifleman, aka Aotearoa’s smallest bird).

Further into the Leith Valley is Nicols Creek, where you can find glowworms and an impressive waterfall. The walking track off Leith Valley Road takes you through similar native bush to Ross Creek, where there are silvereyes, South Island robins, and tomtits.

Nicols Creek is worth visiting twice. Once in the day for birds and waterfalls, and once at night for glowworms (don’t forget to bring a torch, phone flashlights will only get you so far). Just up the road is Moore’s Bush, a former dairy farm that Forest & Bird have been restoring to native bush for half a century.

If your reaction so far has been “ceebs”, a humble walk through the Botans or Woodhaugh also provides opportunities for wildlife spotting. Look up to the trees to see a kereru or korimako. Embrace your inner five-year-old and pick up a log to see what’s underneath. Wildlife spotted in the botanic gardens range from whistling tree frogs to funky fungi to students tripping balls on acid.

Woodhaugh Gardens are home to velvet worms, which makes Dunedin one of the only cities in the world to have a population of velvet worms (peripatus/ngaokeoke). If you’ve never heard of a velvet worm before, it is our pleasure to inform you that velvet worms are batshit-crazy motherfuckers that we don’t really know that much about despite being virtually unchanged for 500 million years. The species living in Woodhaugh haven’t even been named yet. They look like fluffy little worms, but they are actually voracious ambush predators that squirt a quick-hardening slime at prey, and then inject it with digestive saliva to liquefy its insides.

Behind Forsyth Barr stadium is the pathway that leads to the Otago Yacht Club. It borders an industrial block that includes factories and the tip, making the transition to romantic yacht club boulevard feel even more ethereal. It is also an excellent sesh spot. The harbourside commonly has herons, oystercatchers, shags, and spoonbills. If you venture onto the rocks on the shore, you can find sea critters like anemone and crabs.

In the centre of the Otago Harbour is Kamau Taurua (Quarantine Island), which is accessible by ferry from Port Chalmers or Portobello. The first animals you will probably notice on Quarantine Island are sheep, but native bush restoration and predator trapping means there are healthy populations of creatures like skinks, shags, and shelducks.

Halfway up the route to the old hospital you’ll find spoonbills roosting. Spoonbills are all around Otago, but Quarantine Island is a particularly good spot to see these cartoonishly funky fiends. Spoonbills, while considered native now, were not always present in Aotearoa. The first breeding colony was recorded in 1949, which makes spoonbills a more recent Aussie export than VB. In 1977 there were still only 52 birds in the country but since then they have increased rapidly, although there haven’t been any population estimates for the best part of a decade.

At the tip of the Otago Harbour, across the water from Taiaroa Head, lies Aramoana beach. Aramoana is home to plenty of sea lions and seals, as well as all of the sea birds mentioned so far. Dusky, bottlenose, Hector’s, and common dolphins, are often sighted at the entrance to the harbour, as are orca and humpback whales.

The Mole is a popular snorkeling and diving spot off Aramoana where, if you can brave the cold water, you can see triplefins, starfish, and other marine creatures. A sea lion might even say hi.

Pūrākaunui inlet is about a half hour drive from Uni, and is an excellent spot for seeing birds that enjoy getting their feet or beaks wet like herons, plovers, and kingfishers. There is also a path that leads to Pūrākaunui beach and Mapoutahi Pā, which you should look up the history of if you visit.

The beach is buffered by Doctor’s Point to the West and Potato Point to the East. A Critic investigation reveals there are no doctors or potatoes anywhere to be found nearby, but you can see kororā, whakahao, and toroa. Around Potato Point lies Long Beach, home to many beach trips, parties, and penguins that just want a quiet night’s sleep for once.

An occurrence possible on any New Zealand beach, but one that definitely occurs at Long Beach, is bioluminescent algae washing up to shore causing the waves to glow at night. It’s more common in the Bay of Islands and the Marlborough Sounds, but if you’re on the beach at night and the waves are glowing a faint blue, you may have been lucky enough to see bioluminescence. Or you were high, who’s to say.

Te Nohoaka o Tukiauau Sinclair Wetlands are a 40 minute drive from Dunedin, but if you can make the time and have access to transport, it is worth it. Linking Lake Waihola with Lake Waipori, the wetlands have kilometres of walking tracks as well as opportunities for kayaking and camping. Wetland birds flourish, including the secretive fernbird and the endangered matuku/bittern. Other critters you may encounter include kōura (crayfish), giant dragonflies, and southern bell frogs.

Keen to visit some of these places but don’t have a car or friends who want to go? The Wild Dunedin Festival runs from April 22 to April 28 and provides opportunities to go to many of these places with other people on organised trips with transportation.