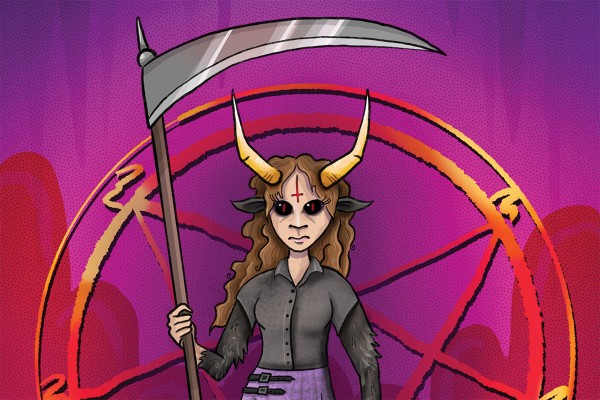 Men have Viagra. I have years of repressed Catholic guilt. This is incredibly unfair, and I decided to fix it by testing out all the female-libido drugs I could get my hands on.

I went to four different pharmacies to find pills. Each time I entered, a lovely pharmacist would come over and ask if I needed help. “I’m after female Viagra,” I would say, to varying degrees of embarrassment. One pharmacist fetched her manager and then told me to leave. Another frowned, and then coldly responded: “we don’t stock that here,” showing me to the door. When one finally pulled through, she insisted on wrapping my pills in discrete paper while smiling pitifully. The sexually liberated #girlboss in me withered.

These are a “unique herbal sea buckthorn and rose oil blend, to support healthy libido and vaginal comfort for pleasurable sexual intimacy”. They are “clinically researched”, which tells you scientists looked at the pills very hard, before deciding they didn’t actually do anything.

First off these pills were fucking huge, presumably to get you in the mood for retching on a monster schlong. You take two at a time, stretching out that pharynx and putting your gag reflex to the test. Their squishy red texture is akin to a post-BDSM chode. The packet strongly emphasises that you take them orally, assuming that I’ll overwise try to shove them up my coochie.

Almost immediately, a tingling sensation flooded my groin. I was pleasantly surprised that they had begun working so quickly, before realising that the feeling was something much more sinister. I ran to the bathroom and had extremely painful diarrhoea. There was blood from my anus. I sat on the toilet and wept.

Online reviews were equally grim. “A waste of time,” said Krissie, who gave the product one star. “Not for me!” wrote Jo. John held a different stance. “Bought this product for my wife who complained of a dry vagina. Since taking this product our sex life and our relationship has improved greatly. Happy wife happy life.” John probably loves poo.

Online reviews were again dire except for the one happy husband. “My lady had lost her tingle so I started her on Go Women Plus. Later she said her tingle had returned. For heavens sake. 50 shades of Grey also helped,” Roger wrote. Sadly, my tingle was still lost at sea, and I cannot buy Christian Grey in pill form at Life Pharmacy.

Guilt: 10/10, because I am without child, and thought about willies

This is an anxiety medication which can include side effects such as heightened libido and, concerningly, bleeding from your skin. The former has led to buspirone being known as “female viagra” and additionally gives you the sweet serotonin that we all crave.

The heightened libido first hit me when I was describing the medication to a nurse. “I’m taking bussy-prone,” I said accidentally, grinding the conversation to a halt. My subconscious mind was taking me to dark Freudian places. I did want bussy, I realised, and prone was only the beginning.

Were my desires due to the viagra-like side effect, or was it that my overall anxiety had reduced? It made no difference either way to my carnal desires. The downsides are that you have to take three pills three times a day, it takes four weeks to actually kick in, and it isn’t over-the-counter. Worth it for the long haul though.

You can find this special pill at any good Castle Street pharmacy. An academic paper that I read stated that desire and satisfaction were moderately-to-profoundly increased by MDMA in more than 90% of subjects. Also, orgasm was delayed but perceived as more intense (Zemishlany et al., 2001).

A Critic reporter who is definitely not me decided to replicate this experiment in the name of science. The findings were in line with existing research: pingaz are shagalicious, baby (Critic Te Arohi, 2021). Remember these lustful undertones next time you’re invited into a cuddle puddle at the weird hippy party you accidentally end up at.

Critic recommends having pre-existing clinical depression so that the comedown feels baseline. Get diagnosed at Student Health today!

I found a website called priestonline.org and sent an email to Brother Stephen. I begged him for advice in overcoming Catholic guilt in the name of a good shag. I emphasised that I was a girl in a relationship with another girl. He didn’t respond for a while, and I thought he might be dead. However, his latest tweet was thanking God for his Covid-19 vaccine so I held hope that he hadn’t gone to heaven yet.

Then my prayers were answered.

“I see the way you live your life in this relationship as personal to you and I would not judge you in any way,” Brother Stephen wrote. “You have to choose your own life, and if you are happy together, then I do not see this as a sin or wrong, but two people who love each other. Many people may say, ‘this is a sin,’ but I see this as two people who love each other and there is no sin. God wants us to be happy, He does not dictate our lives and condemn us for this love of one to another. There are no real sins in the way we treat our body, or who we love. The sin relates to how we treat other people, as given many times in the words of Jesus Christ. So, try to be at peace within your mind, and love people you meet daily, showing kindness, mercy, help, forgiveness and charity to all you meet; it is how you treat other people, these are the real sins in life.”

I genuinely sobbed. I am not kidding. A nice man told me that everything was okay, and it was exactly what I needed to help a life of therapy-deficient religious trauma. It was Viagra for my soul. From here on in, I will bone and think of Brother Stephen.