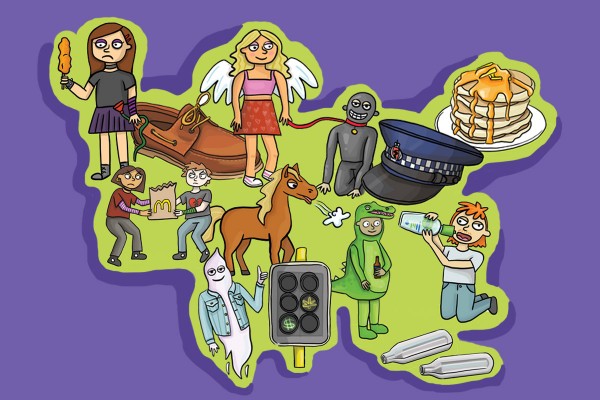 Flo Week and O Week felt more like Slo Week this year. But that’s okay, because people change, and so do annually held fortnight-long parties.

The idea of Flo and O Week is that second and third years can revel in nightly parties free of freshers. However, this year's parties were full of freshers, even in Flo. There were multiple (unverified) reports of public defecation, including outside Big Red, in someone's backyard, and on a cop car. Some munter even stole an entire toilet bowl from one of the flats on Castle Street. Even worse, the first three nights were disrupted by Covid. Despite all this, Otago made their best efforts to get on the rark for a fortnight of fun. Ka pai.

Back to School, Trippy Tues, Gothic

Flo Week kicked off with a Level 2 announcement. Back to School, Trippy Tuesday, and Gothic were all cancelled or postponed. That didn’t stop students from dressing up to the themes at their own flat parties and going hard regardless. On Castle Street, there were scatterings of people walking along the street, boxes in hand. As the nights went on, only the extra-committed were out on the street. Students’ frustration about the lack of DnB echoing through the night manifested in kicked over wheelie bins and trollies.

Anyone who had Summer school exams on Tuesday, Wednesday, or Thursday and got some extra sleep they hadn’t planned for

Once the Dirty-D emerged from a three-day stint of Level 2, Flo Week got off to a slow start. The themes were rearranged and many people had already worn their trippy outfit, or taken their trippy drugs, on Tuesday. Other people didn’t get the memo about the change of theme. They showed up to Feisty Goat expecting preppy outfits, boat shoes, and the confidence and swagger that comes from knowing that your rich parents will bail you out of trouble. They were only half wrong. The Trippy Thursday crowd was a pretty even mix of tie-dye tops and psychedelic glasses, frat polo shirts and salmon chino shorts, and people not dressing up at all. The vibe was wholesome.

The theme for Friday was Love, and students were encouraged to dress up in red, white, and pink. Many of the breathas in attendance were not wearing any of the right colours. Two girls walked their very drunk friend around on a makeshift leash. Dunedin’s famed debauchery was thick in the air. Breathas lined up on the side of the road and behind flats to piss on fences and in gutters. Two separate people fell into Critic’s arms, apologised profusely, then walked off. This may have been a bad attempt at seduction.

White Out basically had the vibe of the toga party in your first year. It was overflowing with freshers finally let loose from their parents. Castle played host to multitudes of students getting their first taste of Dunedin DnB. A few showed up in various colours, which were not white. The party itself was mostly good vibes, with nothing crazy enough to cause the police to step in. The night got a second wind around 11pm as older students, disappointed by the low turnout to Hyde and other party streets, reluctantly flocked to Castle to get their dance on.

Everyone who got free pancakes from the Red Frogs

Cops who had absolutely no idea what was going on

The crowd was a sea of all black outfits, chokers, and eyeliner. When the lights and music turned off at 11pm, everything was so dark that you couldn’t even see someone pissing a metre away from you. Fortunately the music came back ten minutes later, but most people were starting to pack it in. A symphony of DnB playing, people shouting, and glass shattering was interrupted by the police van showing up. Police talked to a hobbling breatha, while someone vomited behind a fence, and a couple got into a fight over their Maccas order. At least students went all in on their costumes. Because of that, Gothic went hard.

The people in Wrestlemania costumes

A Day at the Races

When Critic arrived at Castle for A Day at the Races, the races were over and nobody's horse had won. There was only one fancy hat, which was disappointing. Everyone was leaving. From what could be gathered, the student population used Monday as a rest day.

Those who took a breather and stayed at home

Those who stayed with a breatha and took them home

Because it was in a backyard, and it didn’t overflow onto the street, Jungle was hard to find.  This gave it an authentic off-the-grid vibe. Anyone dressing up had dressed up in green, or camo, or leopard print, so Critic felt out of place in our crocodile onesie. Even though someone did say “oi, you look fucking cool as fuck”, someone mistook a Critic reporter for a fresher. The reporter will take time off to emotionally recover from that.

The owner of Night n Day Regent, who sold 610 hotdogs

Anyone eating one of those hotdogs

Critic for being far too jaded to show up to Castle Street sober in a crocodile onesie, but doing it anyways

Whoever worked at Night n Day that shift

Gender Bender went hard. The theme is potentially problematic, but when you get a chance to go to Castle Street in drag, you should grab it with both hands. The music was good and everyone was getting into it. A group of freshers drank some hand sanitizer, presumably misunderstanding the Covid related health and safety precautions. Costumes ranged from seeing girls with sharpie moustaches and bucket hats to a boy in a maid costume.

Anyone who went all in on their costumes

Gender as a concept

Critic didn't go to Double Denim. As much as we would have loved to dress up like the cover of a 90s tabloid magazine, our previous few nights of investigation had left us needing a rest day to prepare for Friday and Saturday.

Traffic light (where students are expected to wear red if they are in a relationship, green if they are single, and orange if “it’s complicated”) was about what you’d expect. If you were wearing green, traffic light felt like a bunch of people wearing red looking smug because they’ve found love and you haven’t. If you were wearing red, it probably felt like a bunch of people wearing green looking smug because they get to fuck whoever they want. As the night trailed off and it got dark enough that you couldn’t tell who was wearing what colour, hormones and frustration levels were clearly unsustainably high. Fights broke out in isolated pockets and the police had to clear everyone out.

The dudes fighting, resulting in parties on Castle and Leith street shut down

The high schoolers asking everyone for their vapes

Although not as big as past years, Red Finale was still the most anticipated night of the two-week bender we accept as a rite of passage through our university journey. Every last breatha crawled out of the woodwork to make the annual pilgrimage to Big Red.

A congregation of believers in the church of DnB filled the South corner of Castle Street. Many of them had saved their pingas for tonight (after responsibly getting them checked at KnowYourStuff) and many of them were decked out in red from head to toe. Unlike many of the other parties this year, the decks, the lights and the crowd were all still going strong past midnight. Red Finale was a full send.

The guy who did a nang in the crowd

Critic, for not going hard enough over the last two weeks (fingers crossed for Hyde 2021)