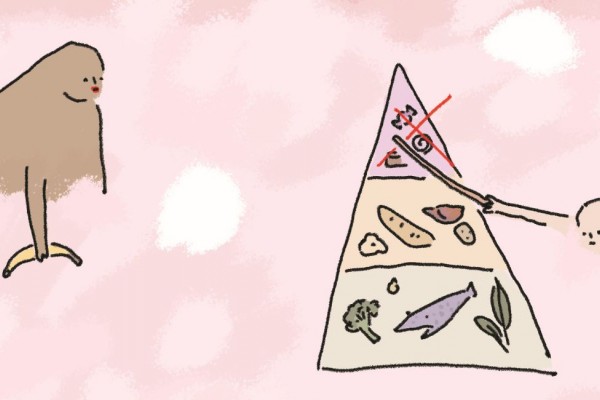 Sitting in a lecture hall, Alex* goes about their day like usual, with the expectation to learn about their body and how food can affect them. What Alex didn’t expect, is the unintentional resurgence of negative feelings about themselves - something they haven’t experienced since their teens. Alex begins to reflect. ‘I must be unhealthy, I don’t need those certain foods, maybe if I stopped eating those bad foods, I would look like those influencers.’ Although wholeheartedly aware of the content, looking to get good grades and fly through the paper, Alex lets their mind wander to a damaging place. They neglect to remember how this mindset has been detrimental to them in the past, and Alex quickly spirals back into disordered eating habits.

Food, eating and body related content is covered in courses such as food science, nutrition, psychology, biochemistry, and more. Albeit extremely interesting and necessary to learn, this information may seem confronting and, if unaware of the content in advance, can be damaging to students who have struggled or have the potential to struggle with food and body related issues. From student experience, this lecture content can make them seriously think about how they eat, what they are doing ‘right’ or ‘wrong’, and can unintentionally be a trigger.

From the perspective of the lecturers, for both of the heads of the Psychology and Food Science Departments - Professors Indrawati Oey and Jamin Halberstadt - this is something they take “very seriously”. However, as far as they are aware, no students have ever come forward with the concern that the lecture material was triggering. They review their content regularly to ensure it is “appropriate, pedagogically sound and up to date”. They both encourage students to talk to their lecturers if comfortable, or otherwise go through OUSA’s Class Rep system to lodge their concerns.

This all begs the question, should students even take these papers if they will be triggered by the content? That question, however, ignores the possibility that people are genuinely interested in the content, or that people can recover and be ready to learn whatever they want to learn. Regardless of a history with eating disorders, body dysmorphia, or general self-image struggles, people can be triggered by anything - nothing is certain.

Statistics surrounding eating disorders in New Zealand are hard to come by, which could be due to the need for professional diagnosis. However, anorexia occurs in approximately 0.5% of females and in 0.05% of males. When compared to the population of New Zealand, this data suggests that around 119,000 females will have anorexia over their lifetime. Bulimia affects up to 8% of the population over years of their lives. Additionally, Avoidant Restrictive Food Intake Disorder (ARFID) affects between 5% and 10% of people. All these disorders are particularly common during adolescence and young adulthood - the age of most university students.

Critic spoke to a few students who have experienced disordered eating and body image issues throughout body and food related courses.

Shae* is a Food Science and Psychology student, who has studied content that covers food, disordered eating, and body image in different ways. Her history of disordered eating goes back to her early teens, triggered by “posts I saw on Instagram from 'health influencers' who would make posts and articles about what foods were good and what foods were bad”, as well as social media’s obsession with ‘fit’ body types. She said this “eventually led to me losing a lot of weight and developing both anorexia, orthorexia, body dysmorphia” and resulted in her admission to hospital when she was 16. Her experience with eating disorders, however, did not hinder her - rather pushed her to study and understand more about food, the brain, and eating disorders all in one.

In Shae’s experience with her food science papers so far, she said they have “not touched too much on the health benefits of food and I think that has been good for me because they don't try to teach us about what is 'good' or 'bad' necessarily”, which is something that she finds particularly damaging. “We talk quite a bit about the idea of enforcing things such as a sugar tax, and other government interventions that can be used to better the health of the population” which she thinks is very interesting, however feels like there are people ignored when discussing these things, “specifically those with disordered eating”. She believes that overall there “tends to be a massive focus on making people 'healthier'” but she feels that this concept “ignores the fact that health is holistic”.

Although Shae had already gone through a journey of healing and managing her disordered eating, she thinks “for people who have yet to learn that health is not one fits all, this kind of content could be rather damaging”. She believes if she had not gone through that journey, she thinks that hearing about “ideas such as taxing sugar or removing foods from the shelf that 'cause obesity' could have really influenced me to change my perspective on food” and consequently lead her to “possibly begin to limit my diet in the same way I did when I first started developing my eating disorders”.

However, Shae has learned to manage her body dysmorphia and disordered eating. She said every now and then she will still “find myself suddenly panicking when I hear people saying things such as 'sugar is one of the worst possible things you could eat'” and anything along those lines. She reminds herself that “eating foods with sugar does not make you fat, a bad person, or any of the things my brain automatically jumps to”, and that these foods won’t harm her.

Shae reinforces that “some may have gone their entire lives without second-guessing how they eat, and I think it is sad how exposure to content like this could change that and potentially damage their relationship with food”.

There’s a recognition that the course content, although didn’t contribute to Shae’s disordered eating, could have had the potential to. “I feel grateful that I have had time to work towards combating these conventional perspectives towards health. The construct of 'health' damaged me so much in the past that I almost lost my life”, so she feels grateful to see food in a different way now.

Chelsea* has had disordered eating for most of her life. “I have never had a specific issue such as one with body image, more an issue with not wanting to eat.” She has never really enjoyed eating and her diet is pretty limited and irregular. She said that “eating with groups has always been hard” and that the “anxiety of eating in a group” made her lose interest in eating.

Chelsea studied Genetics, Anatomy and Microbiology papers, which “often talked about eating disorders” and how they are genetically debilitating. She understands that eating disorders are crippling, but “being told so in that sort of environment kind of takes all the power away from the person suffering from this”, and you feel like there isn’t anything you can do about it. She recalls walking out of one module which covered the importance of a balanced diet, feeling “really crap”, especially as the lecturer discussed these things “so matter-of-factly”.

Chelsea believes that the awareness of her disordered eating in regards to the content she was learning got worse when she was in postgraduate study. She said “the department often put on events for students that served food” and it made her uncomfortable. “Eating in a group is not my idea of a great time, so I either didn’t go, or forced myself to go and hated every minute.”

Reflecting on her experience throughout uni, she realises that she was “so stressed about uni that I didn’t have the energy to dwell on [her eating]”. She believes in hindsight, “throughout my honours year my disorder got far worse”, but it wasn’t something she could identify easily, in comparison to other debilitating mental health issues. For her, it kinda flew under the radar at the time, and so she never really got asked about it or supported.

Disordered eating is not something that Chelsea believes she will ever be “rid of”. She said she “will be like this forever, I just have better ways of managing it as an adult”.

Ana* is a Psychology student who has taken papers that focus on eating disorders, mental health, food and hunger. She has had body image issues for a large portion of her life, stating “I was a heavy kid in my late childhood and people made comments… It’s pretty horrible.” She believes from there, she has had weight issues throughout her teens. “I had an eating disorder in early high school, but no one really knew at all.” Since then, she has definitely healed and learned to love her body, but does live with body dysmorphia, saying “I’m so privileged that it doesn’t rule my life, but I do have periods of hyper-awareness here and there”.

Ana’s papers in the past have focused on why people eat, what they should be eating, and obesity. She said she felt almost blindsided by the content, and said that “it would definitely be damaging to someone who has a past of eating disorders”. She said the content is extremely interesting and beneficial to learn, but it “lowkey made me hyper-aware of what I’m eating again”. She believes she was in a really good place with herself, but it “made me rethink why I was eating, like ‘am I hungry’? And kind-of made me feel guilty for eating, especially foods that aren’t necessarily ‘healthy’.”

Overall, she has mostly eased out of her disordered eating, but it’s not something that will disappear. “The content at the time did trigger damaging routines” such as eating small portions, feeling excessive guilt and convincing herself that she “wasn’t hungry, it’s just habit”. She believes that the paper unintentionally made her conscious of her eating habits again in a damaging way, but she is “so glad that I learned all about it”. She said that she does not regret taking the paper at all, but stresses that “students need to be aware of the content and prepare themselves mentally beforehand. Don’t be blindsided like I was.” She also thinks that the lecturers could be more aware of what they say to students after teaching this content.

Eating disorders and body dysmorphia brought about by course content was not the overall outcome, as some conditions were already present; but students stressed that there is a lack of conversation that surrounds these issues. There needs to be more awareness about the challenges that people go through daily, things that others may not think twice about.

There are so many factors that contribute to eating disorders and body image issues - it’s definitely not the fault of the lecturers or the course. For example, media influence is one of the most dominating reinforcers. Critic has also discussed in the past the effects of binge eating throughout halls, as well as poor diet throughout flatting years. These are concepts that students need to be aware of, both of which can contribute to disordered eating. Unfortunately, there is always the possibility that uni papers can contribute to these things, as well as the uni environment as a whole. Perhaps there needs to be extra reiteration about specific course content, so students have the option to dip out of a lecture that could be triggering, or provide extra measures that can help prevent relapse.

It is overwhelmingly important that students have this discussion about mental well-being, especially in relation to eating disorders - something that is common and often hard to identify. Check on your friends, make sure your flatmates are okay. Just be there to talk, sometimes that’s all people need. Shae concludes with a gem of a motto: “Eating a cookie will always be far better than not eating at all.”