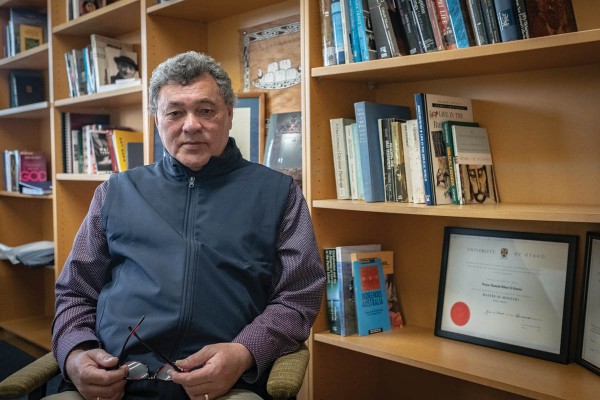 How religion intersects with a Māori perspective on identity and culture

Māori religion and theology has a long and complex history in Aotearoa New Zealand. Importantly, conversion of Māori to Christianity during the 1830s benefitted increasing Crown interest in land speculation: missionaries of the period were able to buy over 63 thousand acres of land. However, Christianity also brought literacy, as the Bible was translated into te reo Māori, and this increasing literacy was utilised by Māori to protect their interests. Later, Māori prophets used Christianity as a vehicle to challenge the systematic loss of Māori land, turning religion into a means to protest colonisation. Despite New Zealand’s overall lean towards secularism, its impacts on New Zealand history has had lasting effects on Māori communities and identity today.

The Reverend Wayne Te Kaawa is a member of the Presbyterian Church and the Otago Uni’s resident Māori theologist. He spoke to Critic about the complexities of Māori religion and theology post-colonisation, and notes that spirituality has always been a part of Māori culture. He said that the entanglement of Māori identity and spirituality stems from pre-colonial days where the atua and the pre-colonial Māori religion were at the centre of the community. Over time, traditional Māori understanding of spirituality has been extended to include new understandings of God, such as those in the various denominations of Christianity, as well as Islam and Buddhism.

According to the 2018 New Zealand Census, around 46.5% of Māori in New Zealand have a religious affiliation. The largest religious groups in the Māori population are Christianity and those who practice traditional Māori beliefs, at 29.9%, and 7.7% respectively. This mirrors the pattern of religious affiliation in wider New Zealand. However, for modern Māori of faith, religion is often intertwined with connecting to cultural identity. Students and spiritual leaders we spoke to in the Māori communities of faith note that māoritanga is incorporated into non-traditional Māori faiths, and that Māori communities can centre around faith, as in pre-colonial times. Critic spoke to several Māori students of faith to explore the relationship between religion and Māori identity in contemporary societies.

“Religion has played a huge role in my culture,” says Kaiya, of Ngāpuhi, Ngāti Hine and Te Rarawa.

A student at Otago Uni, Kaiya is a baptised Anglican, and also has family ties to the Catholic Church. For Kaiya, the interface between Māori identity and religion is complex because of the way Christianity arrived in New Zealand. “Catholicism especially was used as a tool for colonisation in the North, so it’s kind of mind boggling to see Māori so passionate about religion in a way,” she says. In spite of that, Kaiya acknowledges that religion is a huge part of her family and therefore her culture, saying that “how I practice my culture will be intertwined with religion in one way or another because of my family”.

Tutawake, of Te-Whānau-a-Āpanui, Te Whakatohea, Te Aitanga-a-Māhaki and Ngāi Tahu, another student from the University of Otago, is from the Ringatū faith, one of the several denominations founded during the New Zealand Land Wars. These new denominations were based on a Māori interpretation of the Bible, each founded by a different prophet, and some gained widespread support among Māori communities. These included, but were not limited to: Pai Mārire, Ringatū, Ratana, and Iharaira. These denominations are still practiced today, with followers of each denomination numbering in the thousands.

The emergence of Māori interpretations of the Bible is explained by Rev. Te Kaawa as being “about the context: New Zealand land wars, poverty, sickness, starvation. They saw something in the Christian message that would give an answer, explain why they were in that position. So they started melding [Christianty and te ao Māori] together to find a way out of that position.” Thus, Christianity was utilised in the fight against colonialism.

Rev. Te Kaawa estimates that there are over a hundred thousand Māori belonging to various churches in Aotearoa today. He described Māori identity and faith as being “all tied up”.

Conversely, although Kaiya does not belong to a Māori specific denomination, her whānau practice their faith in a way that is firmly entrenched in Māori custom. Although she herself is “not really religious”, she said she still goes to church for the family, and has gone through the typical religious ceremonies. “[I]t’s what whānau do,” she said.

Her grandfather, who is a minister of the Anglican Church, incorporates māoritanga into their faith in ways such as preaching in te reo Māori, and incorporating tikanga (the correct process) and te ao Māori into his sermons.

For both Kaiya and Tutawake, their religion is very much rooted in their family’s culture, with Tutawake stating that he knew his religion would always be there for him even as he came to university, even though he may not practice it all the time. “I may not do my karakia and etc. all the time but I know it is there for me when I need it,” he says.

For Kaiya, coming to university “has really broadened my perspective on Māori religion, and everything te ao Māori to be honest”. Although it also gave her a heightened awareness of religion’s role in colonisation, she says that she is “not one to go against my Papa and my family’s beliefs, and my upbringing for that matter, so it’s a pretty complicated situation”.

Although evidently not always a straightforward relationship, for Rev. Te Kaawa, the community is what modern Māori spirituality is all about. The Reverend is Presbyterian, but for him, the old Māori religion and new understandings of spirituality work side by side. In his experience in Māori community churches--which he notes is usually one and the same as the marae--different denominations and religions are each given a space in ceremonies, contributing to the continuation of old Māori traditions with new iterations of faith. As a spiritual leader, or tohunga, Rev. Te Kaawa also has more than one role within the community: he is an orator and he does whakapapa, picking up those roles as needed.

Modern Māori spirituality and faith has therefore been transformed from a colonial tool into a means to resist assimilation. For Māori of faith today, religion is often a way to reinforce cultural practices, thereby keeping Māori traditions and culture alive. This has led to the politicisation of religion, as Māori became increasingly displaced and dispossessed over the 19th and 20th centuries. Religion was a way to bring communities together and so to strengthen Māori voices and consideration of their interests. Put another way, Rev. Te Kaawa echoes the famous Māori proverb when he discusses the development of Māori theology over time: