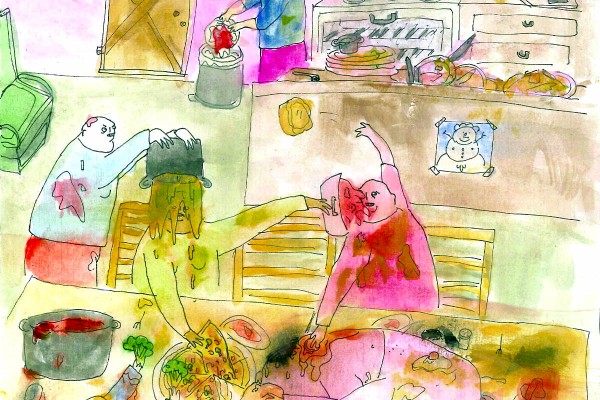 The Politics of Shared Flat Cooking

Shared flat cooking can sound like the best idea in the world. You get to save time, money and kitchen space, all whilst bonding with your flatties over a kitchen table and a square meal. What could be more charming? The reality though, can be far from the Brady Bunch lovefest you might be envisioning. Critic spoke to a range of students about the highs and lows of flat cooking and their experience with the controversial pastime.

Dylan* is in her first year of flatting with three other girls and according to her, shared flat cooking just “kind of happened” without much thought or planning. At the start of the year, her and one other flatmate would cook for each other as the others hadn’t moved in yet, but even in that early fledgling stage “it just became clear it wasn’t going to work”. Dylan was a vegan whilst her flatmate was “very cheese heavy, very meat heavy”. “I would cook us meals because I was like the default, she could eat what I was having but I couldn’t eat what she was making. She would be using meat and dairy.” Even when her other flatmates came home, this behaviour continued, such as the pair often mixing cheese into pasta sauce instead of sprinkling it on top. Dylan described her arm being twisted into eating meat and cheese. “Basically those two were being very ‘we need to share meals, it’s cheaper, but we’re not going to eat your vegetarian meals’. As a self-professed “weakling,” Dylan gave up her vegan lifestyle to satisfy her flatmates.

This isn’t the only problem area, however. Dylan explained that her two other flatmates “don’t work, they don’t play sports, they’re at home every night” whereas her and one other flatmate both work, meaning the pair aren’t at home often. “What’s ended up happening is we cook shared meals, but me and the other girl cook and four people eat, whereas those two cook and it’s like two people eat, so it’s turned into this disparity,” she says. She and her flatmate end up “paying for more but eating less”.

With all this, you might question why Dylan just doesn’t say “fuck off” and cook her own meals. Ultimately, it all boils down to peer pressure. Remember, your flatmates can be some of your best friends, and telling them that they’re not being thoughtful or equal can translate as “you’re a bitch”. Mournfully, Dylan said, “I’ve tried to ball up and take myself out of the flat meals, but I get too scared and I feel like everyone would hate me.” To this day, she still cooks for her flatmates.

Rose* lived in a 6-person flat in her second year when she partook in flat cooking. “The kitchen was fucking tiny, like unreasonably small for any flat quite frankly, let alone a 6-person one. And, I don’t know, I think we all thought we were really good friends, like oh, that’ll be nice, we can have bonding time together, that sort of shit,” she laughed

The plan started out well, with the group even doing group breakfasts and lunches on top of dinner. Ah, the warm carefree months of Summer School. However, tension soon raised its ugly head. Firstly, three out of the six people had dietary requirements: two were gluten-free and one was vegetarian. “How do you make something that’s both gluten free and vegetarian?” Rose mused. “It’s quite difficult, especially over an entire year. It’s pretty much either stir fry or soup.” Schedules also became tricky as the year got underway, with flatmates having late labs, social events and work commitments. Although there were attempts to save leftovers, if you only get home at 9:30, you’ve often already eaten out and some didn’t have time to wait in lines for the microwaves at university to reheat leftovers for lunch, or go home to eat. No one was particularly good cooks either, so the unwanted leftovers often piled up in the back of the fridge to grow mould. As the pressures of university became more apparent, the flatties had less and less time to be homely and domestic, so the meals became “slapped-together dinners that are a bit sad and no one wants to hang around and chat and eat because everyone’s stressed,” Rose said. Meal disparities were also rife, from quality to cost. Whilst Rose thought it was fair that people can choose how much they spend on the meal, she admitted there probably was some residual bitterness. “I don’t want beans on rice! You’ve spent $5 on the meal and I’ve just cooked you fucking salmon.”

Rose said the breaking point came when one of the flatmates hyped up a family dish they were going to make. “They were like, fuck it’s so good, you guys are going to love it so much. They spent the whole day in the kitchen, and then it was shit. It was so bad, like if that’s a family recipe that’s quite embarrassing for their family.” Her and other flatmates had to awkwardly praise the dish, despite their deep disgust, creating “an awkward vibe”. She said that the main problem came when “friendships fell apart, so no one wanted to eat dinner together. If no one wants to eat dinner together there’s not much point in making it for everyone. I don’t want to eat your dinner, you piece of shit!” The flat stopped doing meals together after the first semester, to everyone’s relief.

Jack* is flat-cooking in his third year, in a flat of five boys. Whilst he admitted the food quality isn’t great, he said “it’s a feed at the end of the day and no one’s going to pass that up”. For him, the problems lie in the dishes (“man, the fucking dishes!”). At first the group decided that whoever cooks, cleaned, but “everyone was so exhausted from cooking for five people that it seemed a bit shit cunt to then turn around and make them wash for half an hour”. So the group tried a roster system next. “But people often weren’t home since if they weren’t specifically cooking, they were kinda chill about it, so then the dishes would sit out all night and often wouldn’t get cleaned until the next day’s dinner. They were all hard and gross and took up the whole kitchen,” he lamented. Now, the group resorts to a “just do them if you’re around” system which has led to Jack doing the majority of the work himself.

Jack also notes that food preferences are a sore point in the experience. “Some people have a lot of food preferences, like they hate green beans or tomatoes and shit like that. But you don’t want to cause a huge scene and be that weird annoying flatmate.” But, when you are made food you don’t like, what do you do? Jack struggles with this dilemma. “Sometimes I just take meals into my room and leave them there until I can sneak them into the bin later. I think some people have probably noticed their meals in bins. It’s a bit awkward.” Other times, when he knows what's on the menu, he hides out at university for the evening or makes some excuse to go out. For Jack, flat-cooking is fine “but just a bit meh and causes tension sometimes. I’m not planning on doing it again next year.”

With all these stories, you may be feeling depressed about the prospects of ever finding happiness over the dining table. Fear not, it’s not all shit news. Molly lives with four other people and has had a “definitely positive” experience with communal cooking. Everyone cooks on a weekday (“if you skip a weekday you can cook on Sunday night”) and the flat works in perfect harmony to deliver delicious, nutritious meals. To Molly, flat meals are a godsend. “Maybe I’m really poor one week and I’ve had a big day so I’m really tired, but someone else has got dinner ready for me… it’s amazing,” she gushed. So how does she navigate the murky waters of mealtimes?

Firstly, Molly acknowledged the importance of all having vaguely similar schedules that allow for the flat to be together in the evenings. However, when she works late on a Thursday night, she always takes the leftovers for Friday lunch. Sometimes she’ll spend $8 on a group meal, or sometimes $40, it varies a lot depending on her bank account. The flat also has a vegetarian flatmate, so they mostly cook vegetarian or make a separate vegetarian meal for the flatmate. She recommended doing “something easy like a roast where you can have the meat separate, and then we’ll just replace the meat with a jackfruit or something like that”. However, she admitted that flat cooking doesn’t work for everyone, and that it needs to be a level playing field with all flatmates. Her ultimate advice is: “Don’t agree to flat meals if all you can cook is pasta with tomato sauce on it.”

Even for Rose, who would “absolutely fucking never” do flat meals again, she recommended instead have everyone pitch in for communal flat staples such as rice, oil and seasonings. “That’s the best part about flat staples, not having to be like ‘oh there’s fucking five different oils here’.” That way, if you do feel like doing an occasional flat meal, you can use communal pantry supplies and everyone is merry. Ultimately, don’t feel the flat bond is contingent on shared cooking. “You don’t have to all have dinner together to be friends. Even if it's a small kitchen, people fall into routines, and having two people cooking meals for one at the same time is less hectic than one person cooking for six people,” Rose said. If you are inclined to do the deed, have a chat upfront about expectations when it comes to cost, dietary requirements, dishes, schedules and leftovers. Like most things in life, love, and politics, the “don’t be a dick” rule rules the kitchen.