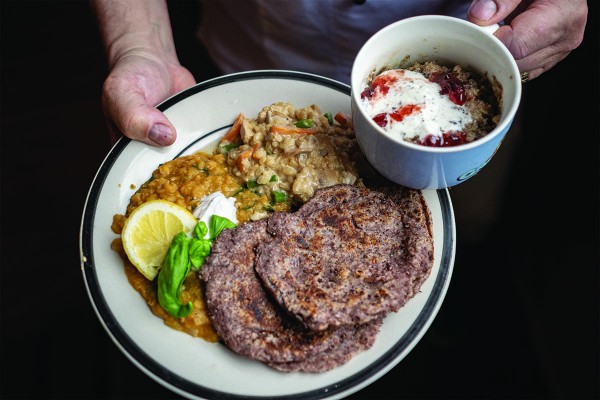 “Cooking is about controlling fire and water.” With two elements safely under his belt, our professional chef-for-a-day is halfway to becoming the Avatar. Critic extorted him for a free meal.

I asked Tony Heptinstall (Senior Lecturer at the Polytech’s Food Design Institute) to take a Friday afternoon off from his work at the Polytech and come cook a meal in my flat’s kitchen. I wanted to see what a seasoned veteran could do with questionable ingredients, shit-quality tools, and a less than desirable cooking space. I had my suspicions that even if you’re pinched for time and in a gross flat, you can still cook a quick, healthy, tasty meal.

The instructions I gave Tony were simple. Imagine you’ve just gotten home from uni and you have 40 minutes until your mates rock up. Make dinner using only what’s in the flat, and you can’t bring anything other than your chef’s coat, so no sharp knives, no fancy spices, nothing but what we’ve already got in store.

We didn’t have anything crazy in stock. Tony was “happily surprised” to see that we had the bare necessities like flour, butter and knives, and was impressed with the “relative lack” of mould. Because we are men of taste, we had a few more “exotic” items like ginger and garam masala. After a five-minute survey, Tony got to work.

He decided on an Indian theme based on our spices, though he pointed out that his main rice dish is a bit of a culinary chameleon and can be any spice theme you desire. He carries a few go-to recipes around in his brain at all times, and they were easily adapted to the ingredients I left him. Recipes are more like guidelines, anyway.

To Tony, good cooking is like good music. It’s adaptable, and it’s all about balance. “The carrots, onions and mushrooms, those are like the baseline. You get those going in a pan and then follow with other layers. The spices, those are like your drums, and your rhythm section, that’s your meats or whatever.” Too much or too little of anything, and you can tell that something’s just not quite right, even if you can’t put your finger on it.

That description of cooking sounded a lot like Ratatouille, which, as it turns out, is his favorite depiction of cooking in the media. His favorite scene is when the food critic gets taken back to his childhood. “Food can really do that, y’know. That’s what good food does.”

As he juggled the two stove-pan dishes, Tony took the time to mention a culinary sin he often sees in student kitchens: the tendency to crank the stovetop up to full tilt “and then wonder why the dish is burnt on the outside and raw in the middle”. I suspected that my shoddy burners would trip up the professional, but he did just fine. Honestly I was hoping that if he screwed up in the kitchen, I’d be able to use that as an excuse for mediocrity until my lease runs out, but only a poor craftsman blames his tools.

Some other life hacks: chilli tolerance does come with time. To easily make bread, combine your yeast, flour, salt and water and let it sit overnight. The bread will knead itself, and then just pop it in a hot oven. Look up how cooks chop their vegetables using the middle finger. It’ll save you a lot of effort, and maybe a fingernail or two.

Tony didn’t hesitate to tell us that in his 30+ years of cooking, North Dunedin took the cake for the shittest kitchens. Though he tastefully described mine as “not the worst place he’s ever cooked”. The worst kitchen he’s seen - in the entire world - was just blocks away. He saw this kitchen a few years ago. Having told students of that year to prepare a dish for a team of fashion designers, Tony clarified at the last minute that by “fashion designers” he actually meant “fashion design students”, and that the meal would be prepared in their flat kitchen. This kitchen happened to be the worst kitchen he’s ever seen.

Not exactly the glam-show that they were expecting, but the ability to adapt their food design on the fly was critical to the students' success. “The kitchen ought to be a place of questioning,” said Tony, as he sniffed a jar of homemade marmalade that he found on my shelf which went off well before lockdown. Use what you have, I guess.

By squashing butter, flour and baking powder together with his bare hands on my kitchen counter, Tony prepared a sort of upside-down sponge cake. He used the marmalade as a glaze. “Well, we’ll see how this turns out.” He popped it in the microwave after admiring the “growth going on in there”. The marmalade ended up being a no-go, because again, it had gone off well before lockdown. Tony used jam for attempt number two. A vast improvement.

It was around this point that he considered using mouldy yogurt to make a sauce, saying, in reference to the green bit, “we can ignore that”. A place of questioning indeed. By the way, when I told him that there was other yogurt available, he quickly made the swap and advised that we “did not eat that”, despite the fact that he was ready to serve it to us 30 seconds prior. Cheeky.

Tony’s least favourite depiction of cooking in the media - and he has several least favourites - is “the MasterChef-type shows”. Cooking “isn’t supposed to be stressful,” it’s a way of bringing people together. In fact, it’s “the best way to get to know someone”. But if you can tell a lot about a person based on what they eat, Tony might have some thoughts about those of us on our fourth Double Down meal this week.

And boy was he willing to share those thoughts. Tony, as he stirred the lentil dahl, launched into a well-rehearsed tirade about the demise of the western diet, the insidious nature of fast food, and the irreplaceable social aspect of dining that is missing from much of western culture. He questioned why western societies, despite having the greatest wealth and education, have some of the poorest diets.

The social aspect of sharing a meal is something he identifies as critical to human nature, and with the rise of impersonal takeaway culture, Tony is worried that we’re missing out on a very basic aspect of what it means to be human. Alongside this, he took great issue with the modern “military-style” kitchen culture, saying that the industry needs to change if it wants to survive.

“There’s this culture of ‘oui, chef’ that students are pushed into in many places. We don’t want that here. Here, we want our students to say ‘why, chef?’ not ‘oui, chef’. Only one of those leaves room for creativity.”

To nobody’s surprise, a professional chef fared just fine in a shit kitchen - that’s why he’s a professional. I got my free meal and a helpful side of culinary insight from a man that clearly cares about what he does. He also sharpened my knife using the back of a ceramic mug, which was mind-blowing.

Tony’s particular brand of gung-ho, semi-anarchistic chefery is easily adoptable into the Dunedin lifestyle and pairs just fine with a pint of whatever’s handy. In the end, he whipped up some flatbreads, a lentil dahl, a chicken and rice pilaf, and two desserts-in-a-cup. Give one of his recipes a crack. Tony supports your culinary misadventures - as long as he doesn’t have to try them.