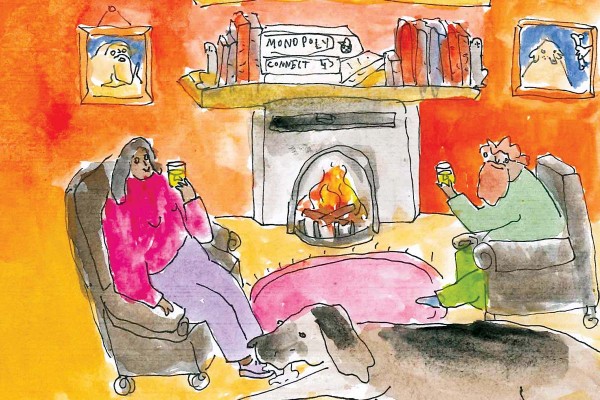 How to Make Your First Date Less Boring

Dating in Dunedin is hard. It’s even harder when the three options available for a date location are: a generic George St cafe, a bar, or their house at 3am. Without some real imagination, Dunedin is relentlessly boring - where else are you going to go? St Clair? The museum? While all decent date spots, I decided that enough was enough after about five of the exact same date. I found myself craving something deeper, more intimate. Or at the very least, a date spot where I could distract myself from a boring or bad date with the location or activity at hand because, dear God, if I have to endure avoiding eye contact and long pauses one more time over a cold coffee, I’m going to scream.

Thus, I embarked on the ultimate quest to find the best date spot in Dunedin. If you, too, are fatigued at the groundhog-day-esque experience of university dating, some of these experiences may just kick start your next relationship, or at the very least force you to have fun while you make a mental note to ghost them.

Most people know Megazone (beside Emerson’s) exists, but how many of us have actually been inside? I always tossed a cursory glance at it, wondering how it was surviving in this damn economy, but never before had I felt the urge to enter the premises. However, once I started thinking about first date spots, I figured it was the perfect place to fulfil my teen rom-com dreams. So, on a Monday afternoon, I took a chance, and invited Toby* to come with me.

When I arrived, puffed and ten minutes late, Toby was already standing outside sheepishly. After a quick hello and an awkward handshake, we proceeded into the building. It was a fairly large arcade, and although not full, there were a decent amount of people milling about. There was definitely a family vibe about the place, though on a Monday afternoon there were more adults than children. Definitely make sure it’s not a school holiday when you go, though - just in case.

It certainly didn’t have the most romantic atmosphere, and we had to shout to communicate to each other, but this date was actually really fun. I’m admittedly very bad at all arcade games, and lost without fail every time, but the competitive vibe between us was kind of sexy, if I’m honest. Surprisingly, an arcade date can be intimate, which I discovered after Toby very kindly showed me how to shoot a basketball properly, sending butterflies a-stirring in my stomach. Afterwards, we grabbed a drink at Emerson’s, because why not.

This date location is fun, sexy and convenient, as it’s right in Studentville … for easy access, if you know what I mean.

This location required a bit of planning, which was kind of annoying to coordinate with my date, Emma*. However, with a bit of back and forth and comparison of timetables, we decided on a Wednesday evening, as they had a discount between 5 and 7pm. To save the environment (and gas money), we took the bus, which afforded a nice 15-minute window in which to have some actual conversation.

The 15 minutes on the bus, as it turns out, was very necessary, as Leap is a giant court of trampolines, under some incredibly unflattering fluorescent lights. Leap is also geared towards a younger demographic, and most of the other adults there were simply supervising their children. As a result, the atmosphere was highly unromantic.

In spite of the lack of ambiance, however, Leap was an incredibly fun date. There was some romantic hand-holding around the treacherous, slippery edges of the trampolines, and some playful shoving onto said trampolines. Leap truly brings out the raw, animalistic physicality that is missing in a chaste coffee date. Additionally, Leap sessions only last one hour, which reduces the pressure and anxiety around having to end a date, should it go less than well.

At the end of the session, both of us were flushed and sweaty; her in a pretty, just got out of yoga class way, and me in a dad eating spicy food kind of way. Amazingly, this didn’t deter her from giving me a hug and promising to message me back. We ended up going our separate ways after the bus home, both in dire need of a shower.

Leap is not for the faint of heart. It has potential, but probably as a third or fourth date kind of deal, so you can invite them into the shower with you afterwards. Overall, a super fun and cute idea, but possibly best enjoyed with friends.

Port Chalmers is a quaint little historic town, just 15 minutes by bus, which you can catch right beside Unipol. I’ll admit I was a little apprehensive about this date, because there wasn’t a specific activity involved. In my head, we would run around the town, surrounded by an idyllic backdrop of historic buildings and the wide ocean. In reality, the late afternoon trip was super cold and we saw very little before dark.

In saying that, however, there was plenty of opportunity to actually get to know my date, Oliver*, and the change of scenery was refreshing. We got fish and chips from the local store, and headed up the Port Chalmers Flagstaff lookout for a panoramic view of the sunset over the harbour, dotted with islands and remote Dunedin suburbs. It’s super quiet in Port Chalmers, so there’s plenty of privacy, and the crisp cool air was a convenient excuse for snuggling. Honestly, this date was the height of romance, and if I closed my eyes for long enough, the sea breeze on my face made me feel like Kate Winslet standing off the bow of the Titanic.

The top of the Flagstaff lookout also offers access to the Hotere Garden Oputae. This garden was built to fulfil Ralph Hotere’s final wishes, returning four sculptures to their origin at Observation Point. This little nook provided plenty of talking points (provided you and your date are interested in art) and some cozy little corners for a cheeky smooch.

Finally, we visited one of the two pubs in Port Chalmers, The Portsider, which turned out to be an adorable spot. Inside, there is a bookshelf of cards, board games and books, and the decor consists of tan, black leather, or warm-oak furniture surrounding a central fireplace. I truly felt as if I should be enjoying a glass of whiskey with my faithful bloodhound resting at my slippered feet.

For atmosphere, Port Chalmers takes the cake of the dates listed here; however, it’s probably best to come with a date you already have a solid rapport with. In summer, I imagine one could run around in a flowing white dress on the streets and pretend you’re in Italy. They also have a farmer’s market on the third Sunday of every month, so if you’re looking for a first date centred around an actual activity, it might be worth checking out.

Look, forget St Clair and St Kilda. Everyone knows about the beach-fronts there, the salt-water pool, so on. There’s only so many fish and chip dates on the beach that I can take, no matter how many cute dogs are in the vicinity. However, just a little bit further, along the exact same stretch of coast, lies Tomahawk and Smaills, two relatively secluded beaches that offer all the privacy for canoodling that you could want.

With all the good weather we’ve been having, I decided to ask Holly* to the beach, with a sack of goon and some cheese in tow. Not three metres down the trail to the beach, however, we were met with a huge resting sea lion, and we were forced to high-tail it in the other direction. Then, as we were headed back along the trail, we heard a man yell, “sea lion!” and were faced with another large specimen, ambling along the path right towards us. This instilled a deep-seated fear of sea lions within me forever. I would only recommend these beaches if you’re prepared to run from 200kg of pure blubber.

Near-death aside, these beaches were actually a super cute date location. Abandoning the idea of a beach picnic, we climbed up a trail through some farmland to the head. This cliff path was deteriorating in areas and covered in scratchy bushes, but on emerging, the head provides a breath-taking view of the sheer drop to the rocks below, and one can see sea birds flying underneath them. We set up a blanket on the rocky ground, and had a sweet conversation surrounded by nature. This date veered into generic date territory, but honestly the views are so worth it, you’d have to have a heart of stone not to feel the romance in the air. Take this with a grain of salt though, it might have been the goon talking.

Although super romantic and fun, I cannot recommend climbing up a deteriorating cliff path while slightly tipsy. For those planning to make a trip, take a friend so you don’t have to be drunk to mitigate the crippling tension of a first date, and have an action plan for navigating sea lion problems. The beaches themselves are beautiful, quiet and serene, so for anyone looking for an effective romantic moment, come here on a second or third date and hold hands at sunset.

So, the Speight’s Ale House tour is not usually thought of as the height of romance, but I couldn’t help but feel like I was missing out. Most of my friends did the tour with their parents at some point, but neither of my parents are big drinkers, so I never got to experience the magic of seeing the Pride of the South behind the scenes. Then, like it was fate, I matched with a tinder boy named Gus*. This mans had it all: a Hilux, a fishing picture, a demure hunting picture (with no dead animals thank you), a mullet, a filthy, filthy mo and a cheeky grin. He was a true-blue Southern man, and I was going to win his heart with this tour.

Amazingly, Gus was also a Speight’s tour virgin. On the day we went, the tour was pretty thin, mostly made up of domestic tourists. This didn’t make for the most romantic atmosphere, and paying attention during the tour meant that neither of us learnt very much about the other in that time. However, I did learn a lot about brewing beer, and the tasting at the end was where the fun really began. A glass of liquid courage later and we were sitting in the Speight’s Ale House, which has a very romantic atmosphere with the exposed stone and the low lighting.

Although it turned into a bit of a generic date, the Speight’s Ale House tour was not a bad first date idea. The tour takes away the pressure of conversation right at the start, when it’s the most awkward, and by the time there’s an opportunity for a long conversation you’re halfway through a beer. Definitely a bit boujee and middle-class for a first date, but honestly sometimes a girl just wants dinner and a beer. Bonus points if you become a sugar baby.