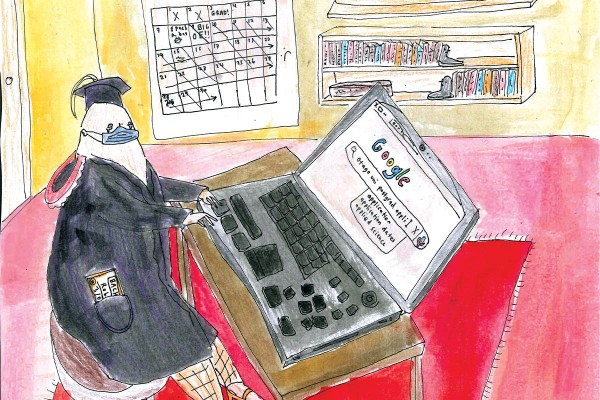 Graduating is both scary and exciting. On one hand, it’s a major milestone signifying great achievements, hard work and the start of a new chapter. On the other, it’s a time filled with uncertainty and nervousness as we enter our first fancy grad jobs or gap years. But for the class of 2020, post-graduation is much less predictable and much more unstable than years prior due to Covid-19 and our rapidly changing, precarious and fragile world. So, how do these graduates feel about going into a pandemic riddled world, and what do their futures look like?

If there is one workforce that will be challenging in the midst of a pandemic, it would be anything related to health sciences. Ellie is in her final year of Nursing at Otago Polytechnic, and said that while her original graduation plans remain relatively intact, 2020 has presented no shortages of struggle, especially in terms of fulfilling her programs requirements to graduate which was heavily reliant on practical work. Ellie described the hustle to get the practical work required to graduate as “a big issue ... we have a certain amount of clinical work to gain the qualification.” She said she spent her lockdown constantly worried about having her degree - and her life - put on hold.

Even more worrying to her was the question of whether or not the health system could handle not having nurses graduate. “The health system is already broken, it’s extremely frustrating,” she said. That being said, graduating with a health-related qualification doesn’t guarantee you a job, which adds to the pressure. “There is a selling point that they need us, but won’t hire us,” she explained. “It’s often due to money, CEOs and other systemic issues [within the healthcare system]. Everyone is ready to go into jobs, but sometimes they just won’t hire more. We started our degrees thinking nurses are sought after, but now they say some of us won’t get jobs.”

Lockdown has been lifted for a couple of months now, but that doesn’t lift the worry, especially given New Zealand’s recent reappearance of community transmission. “It’s been difficult, but the biggest thing is just getting answers. The more Covid drags on, the more I know it won’t end for a couple of years. Everything is up in the air, people aren’t taking that well, everything is unanswered.”

Due to the closing of borders and drying up of job markets, many graduates have taken up further study just to have some certainty for the next year or more. Beth, who graduated with her honours degree in 2019, had to cut her working gap year in Canada short due to Covid-19, and has since re-enrolled at Otago Uni. “I had all these cool plans sorted out, then [Covid-19] happened. In literally 3 days, my work was closing, I lost my job and I was like, shit, I’ve gotta get home.” Further study wasn’t originally in the picture for Beth. When she graduated pre-Covid-19 she had the option to continue studying, but ultimately was “excited to be done with university”. “I had put a lot of work in in a short amount of time. I didn’t want to climb the corporate ladder and the natural progression post-graduation wasn’t something that I wanted to do at the time. I didn’t want to start my career just yet, but was unsure of what was next.” Now, the choice has been taken from her, and Beth now feels a little differently about her future than she did a year ago. “It’s kind of freaky, the prospect of entering the workforce now is fucking scary. I am nervous about it. The world is so uncertain at the moment, those predictable things like uni, job and kids, those milestones have been thrown out the window.”

This hasn’t stopped her from thinking positively, though. She hopes to work in the public sector when she is ready, and wants to help rebuild our world post-Covid-19. “We can rebuild post-Covid, we have to change the way we do things anyway, perhaps it’s exciting where you have an opportunity to start fresh and break away from what came before you, this cataclysmic event has broken the natural progression of things,” she said.

The inconvenience and limbo of cancelled travel plans also rings true for Dave, who is currently in his final year of his Economics degree. Dave was originally planning to finish his degree on exchange in Bristol and travel around Europe before settling into a grad job. However, due to Covid-19, those travel plans have ground to a halt. “I probably won’t be able to have an overseas experience like that for a while now,” he said. Luckily his grad job remains intact, but his ambitious future plan now has a ceiling. “The opportunities just aren’t there,” he explains. “I wanted to work overseas in Australia, or New York. The risk of not getting a job over there is quite high, realistically I won’t be able to go over till 2024. I want to get through it, get out of the country and travel, but I don’t think I’ll be able to go and do that for a while.”

Despite these disappointing circumstances, Dave says he feels being stranded in New Zealand isn’t so bad, as it’s “pretty well off compared to other countries” and there’s “not a lot to complain about, we are lucky in that regard”. However, like all other grads, he does worry about the future - especially when it comes to the economy and the rise in unemployment. “I am freaked out about the economy and how bad our deficit will be, but it’s out of our control. We will be well off compared to other countries, but it’s worse as a graduate. Are you [employers] gonna choose a new graduate, or someone who has lost their job with 20 years experience?” he says.

It’s a similar story for Alex, who also recently graduated in absentia with an Economics degree. Prior to Covid-19 hitting, he had plans to travel to Japan and teach English for a year. While he hopes to still go to Japan in the near future, he explains that finding employment has been an uphill battle. “I’ve been trying to look for a job in Dunedin, but everyone is looking for a job. Everyone at Otago is smart and ambitious, so it’s hard,” he says. “It’s so stressful, it was hard enough finding a job at the beginning of the year, but since lockdown it’s been so much worse.”

Although Alex didn’t intend on going into Economics directly after graduating, he says that “once Covid is over, hopefully there will be jobs. I didn’t plan on going into economics after uni, if there's lots of positions then I’ll do it, but that does mean it locks me in the workforce.” He also shares that being an unemployed graduate has a stigma to it. “I’m on the dole because I literally can’t do anything else. It’s tough with how friends see me, I don’t want to be unemployed, even my parents are kinda disappointed,” he explains, even though the situation is far beyond his control.

Jackie Dean, who is the manager of the Otago Careers Department says that these recent developments have affected graduates significantly, saying “we can appreciate there is some real concern out there about the availability of opportunities right now”. At the start of Semester 2, the Careers Department conducted a survey calling on finalists and postgraduate students to talk about what their concerns are. “The top concern from the respondents was whether they would be able to get a job post-Covid. There are still roles being advertised, people being offered job contracts.” Although some students are getting good news that they have been successful in their applications, admittedly, it is not in such great numbers as previous years. Jackie said that “our viewpoint is that there will definitely be greater competition out there for roles, but with that in mind, let’s look at ways in which we can ensure Otago students are as well prepared to apply for roles as it is possible for them to be.”

Covid-19 will leave its mark on the class of 2020 for years to come, becoming yet another event that will shape our generation, creating some kind of unbreakable unity amongst us. But while Covid-19 marks an abrupt end to our university years, it signifies the beginning of a broken world, which our generation can rebuild.