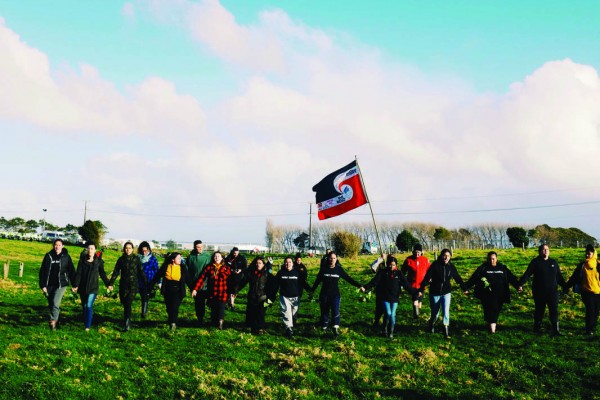 "Toitu te whenua, ake ake ake" we chanted. It’s July 26, 2019, and 300 people gathered in front of the Otago Museum reserve. We marched down the main street, collecting newcomers as we did. We circled around the Octagon. The Octagon is where marches usually end but, this time, we press on. We moved to the one-way system and walked North, before settling in the intersection of Albany and Cumberland Street, right by where we began. We sat down in the middle of the road, stopping traffic. Dunedin News went OFF. We were denouncing the land confiscation injustice in Aotearoa. We were making a statement against colonialism.

It was surreal to be a Māori student in Dunedin while Māori fought for the protection of their land at Ihumātao. It felt hopeless at times, watching from such a distance as Māori clashed with the police and government officials. We knew we were watching history being made, but only few of us could join them in their protest. Unless you scored a plane ticket and could justify ditching class, the Dunedin March was as close as we could get to helping fellow Māori.

It felt impossible to not keep up with what was happening at Ihumātao. The land, based in South Auckland, is believed to be where the first Māori set foot in Aotearoa. It was essential for Tāmaki Makaurau Māori to grow their food. It is understandably incredibly significant to Māori. However, the land was stolen by the Crown during the Land Wars of 1863 and sold to a Pākehā family. The land remained in their private hands until Fletcher Building purchased the land in 2016 for a housing development.

SOUL (Save Our Unique Landscape), an organisation run by mana whenua of Ihumātao, stepped up to protect the Māori land from this exploitation. They began occupying it, and after years of protest, were served an eviction notice on 23 July 2019. People were outraged by the act of Fletchers and the Government, which sparked nationwide protests and a rush of people to Ihumātao land.

Fletchers offered a compromise: Māori could access the new housing and would be given 25 percent of the land. Many argued that this compromise would come at a huge cost to Māori, so to this day no agreement has been reached and many remain on the land. The young students who joined them would eventually return to study.

One year on from the eviction notice, three activists from Dunedin - two Māori, one Pākehā - shared their thoughts on the ongoing occupation and their time in Ihumātao supporting the mana whenua of the land.

Jess Thompson, also known as @maori_mermaid, is a prominent Māori activist in Dunedin. She documented her time at Ihumātao on social media during the heat of the movement - the photos showed the passion and determination of Māori defending their land. “[Ihumātao] represents so much, [and] it gives so much hope to Māori who have lost their whenua,” she said. Another prominent Māori activist, Tangihaere Gardiner (they/them), an Otago Polytechnic student who recently helped organise the Black Lives Matter protests in Dunedin, was able to spend four days at Ihumātao. They said it was “run like a marae. You do what you need to do… you get to work.” They both expressed that their time in Ihumātao gave an opportunity - the first in their lifetime - to truly dedicate time to consider a post-colonial Aotearoa, and what changes would be required to make it happen.

Josh Stewart is a student at Otago Uni and attended the protest last year. The inspiration behind his joining was knowing that the fight for Ihumātao was a real-time case study of land confiscation and reclamation. Ihumātao, to him, has “demonstrated the continual pain and sadness from colonisation”.

All three of them believe that SOUL is the backbone of the movement. Jess said that “it is vital we have mana whenua in charge of their own narratives and their battles”. The fight for the “spiritual, social and environmental wellbeing of the whenua is revolutionary,” she said, and Josh agreed. “[SOUL] shows us all what 21st century activism looks like”, he said. “[SOUL] reflect[s] [the] generation… I hope we see more roopū like them.”

Like Jess, Tangihaere saw the work SOUL put in first hand, and said they are “people who had been living on the land for years and making real connections with people”. Social media made their mahi accessible to the whole world, they said.

The role of the government in Ihumātao is a hot topic. Some believe the government should have stepped in and paid Fletchers to return the land to mana whenua, whereas others believe it is an issue between Māori and Fletchers independently. Jess and Josh both believe the government needs to be held accountable and should have intervened long ago: “if the government had intervened properly... things would have been different certainly, but that's why they didn't.” She believes if they had actually shown up to Ihumātao, they may have had to “acknowledge the realities of Aotearoa and the injustice of the current situation of tangata whenua and their land” and that they would have, in a way, forfeited. “I would have loved that,” she said. Josh summarised what he thinks the government should do: “Return the land to SOUL.”

These activists witnessed a lot of progress during the 2019 protests, but are concerned with the media coverage of it, particularly at the focus on heated interactions between police and protesters. Since this heat has cooled off, Jess has noticed that the Ihumātao coverage is all but non-existent in mainstream media: “This is what I hate about our media. They want to cover violence, distress, extreme movement, but they are reluctant to cover the moments in between. The calm and the quiet struggle.”

The other side of this is that Tangihaere believes artists have seen an increased “opportunity to showcase their art as part of the struggle” and “like[s] to think of it as a reclamation of trauma” even if mainstream media don’t notice.

Josh believes that the social media and news outlets that he follows cater to Māori news, and that is the only way he has kept up to date with anything happening at Ihumātao. That, along with potential media bias.

Tangihaere just wants “mana whenua to get their land back” and from there, assist further in getting more Māori land back, reclaiming across the country. They believe getting this land back gives Māori the opportunity to have a place to call home, and from there Māori can keep moving forward with reclaiming stolen land.

“[T]he tika (right) thing to do is to return the land. I don't care how they do it. Just do it,” Jess said. [The government] “caused this mess” therefore they “need to fix it”.

Students in Aotearoa should be more passionate about this, in Jess’ opinion. She believes “this is the land they walk on. It is Māori land. You have no right to ignore that. The more students who are passionate about Ihumātao, the closer we get to a better future for all our descendants.” She stressed that “if anyone reading this thinks New Zealand isn't that bad, please read Ranginui Walker's book ‘Struggle Without End’. We have a long way to go.”

Tangihaere agrees with Jess, in that students should be passionate because “you’re on stolen land”. They believe students need to “learn from indigenous scholars… Watch Pania’s TED talk, follow everyone from the SOUL campaign on social media” and ultimately, do some work yourselves and ask yourselves the hard questions in regards to colonisation, stolen land, and Māori representation.

“We must rise up and look within ourselves to fix these issues,” Josh said.

A year may have passed since the eviction notice, but Tangihaere has noticed that “people are [still] talking about decolonization in a very serious manner ... It normalized the thought that Māori could thrive if given the chance and that’s something a lot of young Māori people needed.”

At the time of writing, rumours of potential compromises between Fletchers and Māori continue to circulate. But the story isn’t over, and even a compromise wouldn’t change the facts: Ihumātao is stolen land - a concept that is all too common in this country. However, a year on, Otago students - and young people from all around the country - remain passionate about Ihumātao and Māori issues. It is a passion that perseveres even in an overwhelmingly Pākehā city.