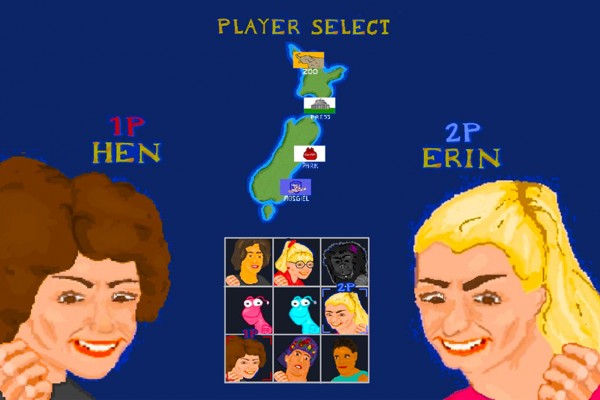 Children’s television in the early 2000’s was such a vibe. Whether it be waking up every Sunday to try call the What Now Telly-Op’s to get some free gunge, or trying to get your spot on Sticky Stars Duets; high quality shows like What Now, Sticky TV, Studio 2 and the Erin Simpson Show helped define a generation of New Zealanders. Remember when What Now released their parody cover of Savage’s “Stop Drop and Roll” called “Eat Sausage Rolls”? That was comedy at its finest. We look back at these shows and their beloved hosts with rose tinted glasses. Unfortunately, nostalgia can blind us from the crushing reality that maybe these presenters aren’t still worth idolizing. Many of them were just regular Kiwis playing exaggerated characters of themselves, like Jason Fa’afoi, Dayna Vawdrey, and Shavaughn Ruakere. The older I get, the more I realise that many of those presenters seem like they’d be a bit of a dick.

In a place like New Zealand where everyone knows everyone, word of mouth spreads very fast. You can’t just try and remove your secrets like Drew Neemia’s music career. (That’s right, that one song in the elevator? I still remember you.) Which is why I’ve provided a comprehensive list of the childhood television presenters that do not stand the test of time, but whose memories are so fondly remembered by my peers that the only way I can think of rescuing you from their nostalgic clutches is through squaring the fuck up. This is a list of the childhood TV presenters I would like to fight.

For legal reasons, this is all satire.

Erin fucking Simpson. In her heyday, she was the queen of children’s television. I mean, she first featured on Sticky TV, and then gained enough popularity to have her own show named after her. What a hustler. Yet there’s something about her overly excited demeanour that just makes her so fightable. The most memorable things from her career is her show’s theme song, and the time that Blindfolded and Led Into The Woods performed a death metal set in front of a bunch of kids. She’s like the physical embodiment of Smiggle, and looks like she smells like Cool Charm - but not the good kind. Like, what is she even doing now? Making problematic art that appropriates Māori culture and being married to someone from The Bachelor NZ? Fuck that noise. You can just tell that she’s all about the Live Laugh Love lifestyle and then will just completely talk shit about you behind your back. She emits a bad aura that makes my chakras unaligned. There’s no doubt in my mind that she’d fight dirty. Like hair pulling or bringing in unsolicited weapons.

Strength: I feel like a good fight would fuel her, making her progressively stronger as it went down.

Weaknesses: Would instantly block you on social media when trying to call her out.

Weapon of choice: A tacky Unicorn horn that she probably made, you know, because she’s an ‘artist’.

Fighting terrain: The fucking pit. See you there.

Richard Mills aka DJ Vinyl Richie from What Now is a bit of a dick. Back in 2004, I competed in the most gruelling task any 8-year-old can face: the coveted WeetBix Tryathlon. Every year they had special celebrity guests, and DJ Vinyl Richie was mine at the Mosgiel Tryathlon. Starstruck, I approached him and asked him to sign my t-shirt. He was walking around with a dart in his mouth, begrudgingly talking to the kids who idolised him. He looked to me like he just wanted the pay check and then pull a swift Irish exit. When I asked him to sign my shirt, he was so rude and condescending. That was the first time that I realised that not everything you see on TV is real. He broke my heart and my childhood innocence. Ever since then, I cannot look or think about him the same. Is it possible that he was just having an off day and I shouldn’t hold on to a grudge for this long? Absolutely. But will I stop? Absolutely not. On his TVNZ profile, he lists his ideal super power as “the power to silence people. So it's quiet.” Sinister. To give him credit, he’s been laying pretty low after departing from What Now, so maybe that’s a better kick in the guts than I could ever give him. But I still wish to seek my revenge.

Strengths: Lack of recognisability, meaning it would be hard to keep track of him.

Weaknesses: No lingering fans to protect him.

Weapon of choice: Throwing stars made from used records.

Back in the old days of What Now, Camilla the Gorilla was absolutely terrifying. She wasn’t the cute big eyes and purple dress wearing Camilla we know now. She was literally just a gorilla costume that you’d get at any party store. As a tiny child being unable to recognise that it was just a costume, seeing a gorilla roam around and wreak havoc was horrifying. It was like some shit out of King Kong, and I couldn’t understand why people were in love with her. I remember having vivid nightmares of Camilla coming into my room and covering me in gunge in my sleep. Camilla destroyed the What Now set for years with no repercussions, and it’s time she gets what’s coming to her. This would not be an easy fight, as gorillas are known for their strength and distinct lack of human remorse. But someone has to do it and put Camilla in her place. If it happens to be me, then so be it.

Weapon of Choice: What Now gunge that’s laced with asbestos.

New Zealand’s bad boy. If you say that you didn’t have a crush on him growing up, then you’re lying to yourself. Drew had an outstanding career. He was on Sticky TV and C4 Live, and had a hit music career with his single ‘Get Over You’, but then just completely vanished from the face of the earth. That’s some king shit. Seeing Drew rock a Justin Bieber style haircut in early 2010 made my heart swoon. However, you can just tell that there’s a dark side to Drew. The wild side that can’t be tamed and loves to get on the absolute rark. I feel like challenging Drew to a fight would be the best way for him to relieve all the pent-up anger he has. You can’t just disappear from the media landscape without a trace without some bad blood, and I won’t let you get away with all the anguish you’ve caused me. I’d like to think it would be a pretty evenly matched one outz, but deep down I know that Drew would absolutely demolish me. However, I won’t let that stop me from finally finding out where the fuck he’s been hiding for all these years.

Weaknesses: His lack of ability to interview.

In what kind of fever dream, acid trip reality did someone think making The Wot Wots was a good idea? Who the fuck are these cunts, and why do they think they’re better than me? These two little gremlins just being an absolute menace around Auckland Zoo in their spaceship, getting up to fuck knows. Their whole language involves them saying their own name with different inflections - narcissistic much? These fucking little aliens deserve a roundhouse kick to their face. I don’t know what it is about The Wot Wot’s that make them so detestable, but you can’t tell me that you wouldn’t want to beat up one of those goblins. Stop trying to be Squirt the Penguin. Judging by the scale of the objects they stalk in Auckland Zoo, you would probably be able to fight them both at once. Honestly, they deserve what’s coming for them.

Strengths: Access to a Spaceship, the power of which is unknown.

Weaknesses: Their lack of reality and rational thinking.

Weapon of Choice: Those weird hover-chairs they have.

One of the true OG’s of What Now, Tamati Coffey was a supreme g unit of children's television. I fondly remember the day that he came to my primary school on a horse for a girl’s birthday, and he gave me a high five. It was the best day of my life. Tamati’s time on What Now was short lived. He promptly went on to become a weatherman, member of Dancing with the Stars, and is now a Labour politician. The idea of someone who once dressed up as a very shitty cheerleader on Sundays at 10am being a member of Parliament is absolutely incredible. Instead of having a physical fight, I would rather have a fight of the mind. Tamati, let’s debate. Let’s talk party politics, the legalisation of cannabis, and whether or not you think Banana is the worst flavour of Fruit Bursts. My DM’s are open and waiting.

Suzy Cato is one of the greatest things to come out of this country. She is a national treasure and a pure angel that we must protect at all costs. Multiple generations of kids were brought up watching Suzy’s World and You and Me. She has such a kind and earnest way of presenting television that you couldn’t help but love her. In terms of a fight, there’s no way that I could ever lay a finger on her since I love her with all my heart. However, if Suzy Cato ever decided that she would want to punch me in the face, I would be more than willing. In fact, it would be an honour.

Weaknesses: Literally none. She is perfect.

Weapon of Choice: Those puppets from You and Me.