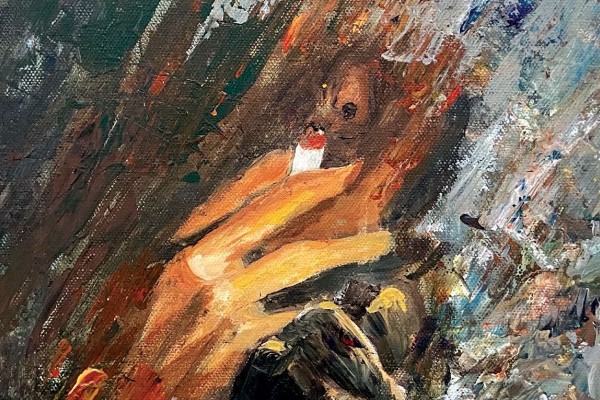 How to Develop a Nicotine Addiction

An inside look at Otago’s own Vape Nation

When I was 18, I smoked my first cigarette. I was roaring drunk, on the balcony of an Auckland club, and I remember feeling so cool—rebellious, even. The morning after, however, I began to feel super guilty. My dad had smoked cigarettes his whole life, and he lost a kidney for it. I remember wrestling the pack off him as a child, convinced it was going to kill him. Then, in the summer of my third year at uni on a night out, I was passed a vape containing 50, maybe 60mg of nicotine in it. The next morning, I went out and brought a disposable vape. I went through maybe ten of these before I realised I needed to buy a more permanent solution. Just like that, I had developed my own nicotine addiction.

Drinking and smoking often go hand in hand. However, though drinking is widely known and accepted to be a part of student culture, vaping and smoking have become ubiquitous with a night out. So why is no one talking about it?

According to Smokefree NZ, people aged 18 - 24 in 2019 made up the highest percentage of smokers out of any age group in the NZ population, at 15%. That figure doesn’t include people who vape, which has become increasingly common, especially amongst university-aged students. Currently, the best estimate we have of youth vaping is the ASH Yr 10 snapshot survey; which found that 1.8% of 14-15 year olds use a vaping device daily, and 4% weekly.  However, they also stated that “smoking uptake predominantly occurs… among an older age group, and this pattern is plausible for vaping also.”

Most of the students we spoke to took up smoking or vaping while at university, typically at flat parties or because of stress. We spoke to several students who graduated from social smoking to smoking regularly.

For many students, smoking and partying go hand in hand. Taylor* said he would bum cigarettes at parties and while out in town, but that the bumming gradually increased, and eventually he ended up just buying his own packet. Taylor now uses nicotine almost every single day, noting that “[my] uptake was directly related to my alcohol consumption”. This is the same story for Emma*, a casual vaper, who also started vaping in this way. She “brought a vape at RnV because [she] thought it was funny,” and stated that it’s “really connected to drinking” and is “another part of drinking culture”. Jacob* said that he first bought cigarettes at a concert. “I didn’t want to say that I didn’t smoke so I bought a pack, because I thought ‘oh, does everyone smoke?’” He said that he was a casual smoker, and only smoked while on the piss, until one day “I got real stressed out so I picked up a sober [pack] and then didn’t stop.”

The students that didn’t cite drinking culture as their gateway to nicotine addictions stated that the stress of university led to their uptake of smoking and vaping. Both Jacob and Andy* said that “something about university” was the driving force for their addiction. Jacob noted that “I always feel way more relaxed when I have nicotine. Sometimes one reaction won’t work and I’ll be like, where the fuck is the nicotine.” Ollie* said that “after a few hoons on [my ex-girlfriend’s vape] to de-stress about uni exams and assignments, I realised how convenient the vape was…[it was] a cheaper, easier and more portable way to have a breather, regain focus and de-clutter any internal stress.” Hannah* agreed, saying that “when I got to uni, I realised it was a really good stress relief, and when I was in third year uni, I was smoking a pack every one to three days.”

Lots of the students we spoke to who started smoking at uni, moved to vaping, citing financial, social or personal reasons for doing so. This is the story for London*, who said that she started smoking while drunk at parties, which led to vaping as she thought it was quite funny, but noww “my vape is like a part of me”. Taylor started vaping due to the financial benefits of vapes over cigarettes, and so did Andy. He said that he would “feel like a stinge cunt” bumming cigarettes off others at parties, but couldn’t afford to keep buying his own. “Then, vaping became a [more mainstream] thing, like it wasn’t just for men with neckbeards and man buns anymore.” Michelle said that she started vaping as she couldn’t afford to keep smoking cigarettes. “I knew that if I wanted to eat every week I couldn’t keep [buying packs].” So she brought a vape, which she said was “fucking cheap”, but the flipside to that is that she’s “way more addicted to nicotine now than when I was smoking cigarettes” even though vapes are marketed as a cessation tool.

Socially, some students we talked to believed that smoking and vaping contributed positively to their lives. Ollie said that pulling a vape out at a party helped to calm his nerves and yarn with his mates. Michelle agreed, stating that her nicotine addiction was the easiest way for her to socialise at parties. Hannah actually started “Otago University Nicotine Addicts” in her time at university and said that the social aspect, meeting up with others, really fueled her addiction.

However, Hannah also said that “when I was heavily chain smoking, it was at the pits of my eating disorder...it was a form of self harm [because] I was smoking as an appetite suppressant.” Michelle had a similar experience, stating “that’s why I’m so fucking skinny. [Me and my flatmates] all lost weight from nicotine addictions [as we] don’t get hungry.” She said that “it was a cycle” as “[not eating] made me feel bad about my life and my own health, and it would make me stressed and then I would smoke more.”

Health NZ found that the lower your socio-economic area was, the more likely you were to be a smoker. Now it’s no secret that students are often broke, but according to the 2018 census, the residents of North Campus, Dunedin were found to have a median income of $4600 per annum. Oof. Hannah said that “financially, [smoking] absolutely fucked me. The amount of times I put aside groceries to buy a pack, or a pouch was ridiculous. I would hold out for my pay check to buy a pack... when I was desperate.” Similarly, Andy said that “when I moved here in my third year, I was really poor. Me and my mate would spend all of [our] money on cigarettes. At times we would spend it on nicotine rather than food.” Taylor said that he believes the fact that “vapes are cheaper than cigarettes and less of a financial burden” is leading to a “general trend in people quitting smoking and taking up vaping”.

However, almost every student we spoke to believed that the financial accessibility of vaping led to an increase in nicotine addictions, rather than a decrease. Hannah said that “vaping is almost worse because you can do it inside and it tastes better, so you want to vape more. [You don’t] register that it could kill you.”

Many of the students we spoke to believed that the uptake of smoking and vaping during nicotine was a strictly student experience for them. Taylor said that he’s in the process of quitting, and tries to do days without using his vape. However, he still intends on keeping his vape for “casual use”. London said that she’s not aiming to quit anytime soon, but that she “[doesn’t] want to be one of those old people that vapes”. However, “while I’m at uni, I don’t care.” Ollie said that he’ll quit “when I graduate, for real,” as he won’t have to deal with the stress of university anymore.

Hannah doesn’t have plans to quit, but notes that “Quitline doesn’t include vaping, but it should cater to that too.” She also said that “Quitline doesn’t affect young people. You think you have to be thirty-something to sign up.” She said that “students get caught up in the idea that they’ll just do it at uni… but the underlying addiction to nicotine is [still there].” For Hannah, she said “it feels shameful to admit I am a smoker. [People] always look down on you.”

Although not everyone develops a nicotine addiction at university, it seems like uptake of smoking is not an uncommon experience, especially given its relationship to drinking. Michelle said she feels it’s strange that there’s no messaging around social smoking as with social drinking, as she doesn’t think “anyone deserves to be controlled by something like this”. She notes that nicotine is a “cheap stress reliever that appeals to the working class and marginalised people” but then the “stigma is put back on these people [for having an addiction]. It’s shameful [of the government to do]. My nicotine addiction has ruled my life for four years.”