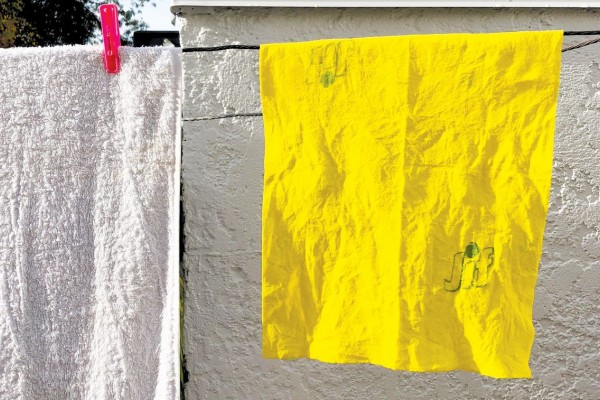 DIY Tampons: A Warning, Not A Guide

There is no worse feeling than when you get a surprise period. On the one hand, it’s cool because it means you’re not pregnant. On the other hand, you have to deal with blood leaking out of your uterus for a week or longer, and all the other hormonal side effects alongside it. Everyone has different experiences with their period. Some get small flows that last a few days, some get big flows that last weeks, and others don’t get them at all. But a universal experience shared by all period-havers is what sanitary products they use during this time.

Which sanitary product you select depends on your preference, body, and financial situation. Sanitary products can be pretty expensive, which is fucked up considering how essential they are. But on top of that, most are environmentally unfriendly and have literal (but rare) health risks.

Personally, I prefer tampons. As I just so happened to sync up with the release of the menstruation issue, I sought out to try and find some cheaper home alternatives. After doing some comprehensive research on acclaimed and trusted news sites such as Buzzfeed and Cosmopolitan, I came up with four items that should theoretically work as a DIY tampon. Now, no site said that these should be used as tampons, but also, no site said that they shouldn’t either. However, let me please preface this by saying that this article should be a warning, not a guide.

Everyone knows the old trick of when you need a pad on the go, you just wrap a bit of toilet paper around your underwear. It’s not the most comfortable, but it gets the job done. Toilet paper makes for great liners or pad substitute, but what about an actual tampon? After getting about two squares of the finest Purex 3-ply, it was strategically rolled to resemble some kind of tampon.

Now this wasn’t as uncomfortable as other alternatives, but my vagina definitely knew that there was something not right. The insertion was difficult given the lack of structural integrity of two squares. I was still able to go about my regular day and move about. It was able to absorb a fair bit of blood, more so than the others. But, the real issue was taking it out. As toilet paper is known to disintegrate very easily, I feel like there's still little bits stuck up there. In saying that, this was probably the best of the makeshift tampons I made. It did its job okay, but works far better as a pad.

Comfort: The luscious lips of the sexy CottonSoft mascot.

Effectiveness: Tom Holland at the end of Avengers Infinity War.

Reusability: Give yourself an extra wipe, you deserve it.

A stronger version of toilet paper, the mighty Jif cloth has provided aliment for many spills. But could it be enough to cover the spill of period blood? The thing most noteworthy about Jif cloths are their reusability. A leading issue with period sanitary products is how wasteful pads and tampons are, given that you can only use them once before disposing of them. But with a Jif cloth, you can easily wash it in boiling water and reuse it in the same way as a menstrual cup - kind of.

The insertion was the hardest part, as it wasn’t able to hold and stay the same shape as a normal tampon. But after some perseverance, we got there. As soon as I put it in, my body immediately hated it. I started to get cramps and discomfort around my abdomen, and it was hard to move around without it falling out. I lasted about three minutes before I decided I had enough. It did manage to catch some blood, and it did come out after a thorough rinse. Once I took it out, I started to feel a bit headachy and nauseous, that was not helped by some frantic googling of whether or not I gave myself TSS. What the Jif cloth has in reusability does not make up for its uncomfortable experience as a tampon. Please, do not try this at home.

Comfort: Trying to push all your empty food scraps down the small drain holes.

Effectiveness: My personality as a form of birth control. Take that as you will.

Reusability: Wash in warm or hot water. Do not tumble dry. Do not bleach. For a better, streak free result, do not use a fabric softener.

The thought of sticking a sponge up my vagina as a tampon sent shivers up my spine. I got a mental image of accidentally putting some of the scouring side up there and I could feel my uterus shudder. I decided to then use the sponge as a pad, by giving it a thorough wash and sticking it in my underwear. In hindsight, I definitely should have cut a little bit off to use because having a whole sponge in my underwear felt like I was sitting on Spongebob’s face.

On first thought, it’s actually quite comfy. It feels like a little airbed for my coochie. However, the issue with most pads is how you feel as if you’re wearing a thick diaper. After a while, it began to get less comfortable as the air bubbles started to scratch quite hard. I definitely felt more immobile than with the other solutions, because walking wasn’t that much of a comfortable experience. I left the sponge pad in for around half an hour, and it did a pretty decent job. There was little leakage, and the sponge absorbed a fair bit of the blood. Plus, it was also able to be easily washed out, meaning that it can be reused. However, why someone would actually want to do this, I don't know.

Effectiveness: The best that a three pack of Value sponges for $1.69 can offer.

Reusability: Give it a rinse, and put it back in the sink for dishes.

If you accidentally drop your phone in some water, what’s the first thing you do? Put it in some rice to try and absorb the water all up. So, theoretically, could the same logic work for periods? After questioning everything that has led me to this moment, I set out to find out the truth. I decided that rice would not work as a tampon as such, but more like a pad that should absorb some of the blood. I used under a quarter of a cup, and tried to lay it out nicely on my underwear.

On first thought, this is utterly stupid. Rice kept falling out, and my mobility was limited by the fact that I felt like a maraca everytime I moved. It wasn’t particularly comfortable, but I did get used to it after a while. Maybe I should have gently boiled some of the rice for a smoother experience. After leaving it for an hour, to my surprise, it actually sort of worked. Some of the rice did actually absorb some blood. Unfortunately, my jeans did the rest. It was more the surface level that was protected, but the constant moving meant that there wasn’t an even amount of protection. Now I’m just left with a mess of semi-bloody rice over my bathroom floor. So theoretically, yes, this does work - but, for the love of God, it’s not worth it.

Effectiveness: 2/8 tampons, not enough to warrant the joke.

Reusability: None, you sick fuck.

Overall, my recommendation is that if you’re trying to create a DIY tampon, you’re much better off free-bleeding. While putting these alternatives to the test, we can prove that they do work, but that you shouldn’t use them. It’s not worth the potential dangers and the cramping you’ll get afterwards.