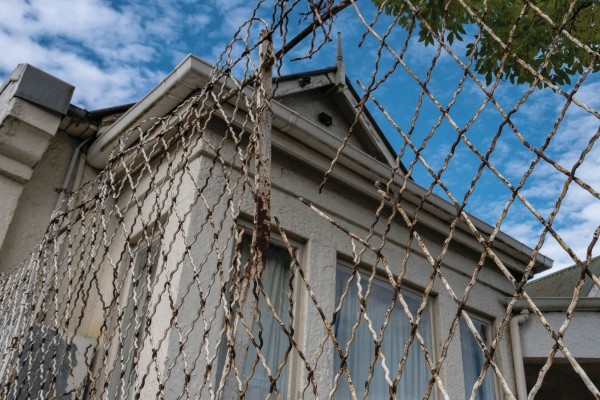 Betty is a Psychology major in her second year, living in a four bedroom villa in gorgeous North Dunedin. The 21-year-old welcomed Critic into her bespoke, contemporary home to showcase the best of Dunedin flatting.

The first thing you notice upon entering is the striking placement of the mattress in the hallway. Upended against a wall, the mattress creates a stunning vocal point in the narrow space, acting as a conversational piece. Betty explains the flat isn’t allowed to get rid of the mattress installation, despite ongoing pleas by the tenants. Outside too, more furniture owned by the landlord sits, bundled under a spunky turquoise tarpaulin.

The house itself is on a spectacular lean, due to sinking foundations. When you walk around the flat you can feel the gaps in the carpet; of history beneath your every step.

Mould on the ceiling also works to draw the eyes upwards to the height of the room, creating a remarkable sense of space. It’s an alluring property, one that Betty and her friends are proud to occupy for $135 each a week. “It’s really close to uni, and we left it a bit last minute, so it was either a house here or one really far away, and none of us drive,” she discloses.

The flat invites an open, honest approach to living. None of the doors fully close, due to the foundation problems, so the friends share a communal approach to their daily life, redefining their conceptualisation of privacy. Some windows are without locks, serving as a warm invitation to strangers to join them in their humble abode. The house backs Castle Street, so the neighborhood is alive with character and sparkling broken glass. The communal living doesn’t just apply to human beings, but rather God’s creatures of all shapes and sizes. “We also have a really bad slug problem,” laughs Betty. “They’re in Lydia’s room. She gets so many slugs. We think they’re under her bed...we just pretend they’re not there, because we don’t know what to do! She doesn’t want to pick her bed up!” The slug trails glisten throughout the flat, a whimsical element that helps to add texture to the walls.

Upon entering the kitchen, one is struck by the dazzling and playful arrangement of colour. The cabinetry, painted a bold blue, contrasts against the pale yellow of the walls, delighting the visual senses. “It's not even like a nice yellow, it’s like a piss yellow,” Betty explains. Defecation is a primary theme throughout the flat to create unity and help tie together the living spaces through this central idea. The house contains two toilets, but only one currently works at the moment, a bold contrast. The drainage system to the house is broken and, with their landlord refusing to pay the two thousand dollars it would take to undertake such a repair, Betty says “we’ve had plumbers come three times to unblock the drain, and each time they’ve said it’s just gonna block up again.” When the drain does fully block, the flat is left to fend for themselves without water for entire weekends, which means no showering, no washing machine, no use of the bathroom or sink. The first time this happened was two weeks into moving into the vibrant home, which meant frequent trips to the nearby university toilets. The centrality of the flat to nearby commercial bathrooms is a huge selling point. The fecal theme carries through the house to the garden patio, where sewage often pools as a result of the blocked drain. The overall effect is breath-taking and really emphasises the smooth indoor-outflow flow of the property.

A few months into her lease, how does Betty feel about her beautiful home? “It's funny now. Like it’s gotten to the point, what month are we in? We’re in March right? [It was May] Oh fuck. So the first month, it was stressful, and you get to the second month, and it’s like, this is ridiculous. Nothing’s ever going to be fixed, so what’s the point in even caring?” She gushes. This carefree approach is evident in the flat’s approach to interior design, from Twilight posters strewn around the lounge, to party lights in the working toilet. It’s a space that works well for both relaxing and entertaining. Betty is looking forward to making the most of the beautiful villa in winter, saying, “oh, we’re fucked. Like our house is cold now, it’s colder in the house than it is outside. I spend most of my day in bed.” Betty’s flat is just one of many Dunedin charmers that will undoubtedly appear on the rental market for next year. With such an array of character and amenities, what’s not to love?