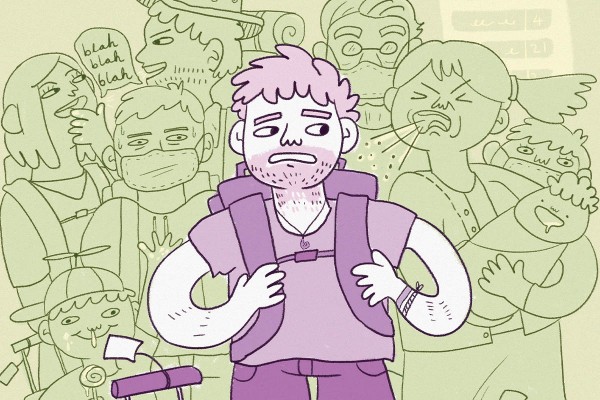 Over 48 hours, countless American exchange students had to decide: stay, or go? Many had no choice at all.

Eight confirmed cases of Kiwi Covid. Jacinda Ardern announces that all overseas arrivals in New Zealand must self-isolate for 14 days. Hundreds of American students in New Zealand watch as their country descends into a toilet-paper wasteland. In Aotearoa, these students are mostly worry-free: happy to be with their friends, ready to support their family from afar, and glad to be isolated on this remote island. Purely by chance, their choice to study in New Zealand has provided them with one of the safest havens in the world from this pandemic, and life here seems to be normal.

It’s been 48 hours. Rugs have been swept out from international feet. Their sense of security has been shattered, but not because of an Aotearoa outbreak: scores of American students have been contacted by their home universities or study abroad programs demanding their immediate return to the United States.

Most of these students have been given a dubious choice: come home now through international airports and finish this semester online, or come home, drop your Otago papers, and count this semester as a hiatus (you still gotta pay for it though). In other words, here’s the choice facing many Americans at Otago:

Not much of a choice, is it? Especially considering that American universities seemed to have overlooked the crucial fact that - at the time of going to print - Otago hasn’t moved to online classes. The responsibility of managing this semester’s credits has fallen squarely on students’ shoulders: “we’ve had to go to our profs independently. We could just be fucked,” said one American exchange student.

The move is being done under the guise of “student safety,” but many feel like it's an effort by the institutions to cover their own asses: “Oh, I absolutely believe this is just a liability issue. They just don’t want us dying of coronavirus on their dime. It’s okay if we catch it once we’re back in the States, that’s not their problem anymore,” said another student.

One university sent an email threatening that any students who decide to stay abroad will be charged with something called a ‘Conduct Violation’. The recipient of the email said “Conduct violation? I don’t even know what that means.”

Citing border closures, St. Lawrence University (SLU) directed their students to return effective immediately, saying that they aim to ensure no interruption towards a student’s degree. Despite citing “health and safety” as their “top concern,” SLU has reportedly threatened to rescind the visas and healthcare of any of their students that choose to remain in New Zealand.

It's pretty hard to believe that this recall is fueled by the goodwill of corporate education; in what seems like a knee-jerk reaction, they’re about to send hundreds of healthy students through multiple international airports, straight to the heart of one of the most haphazardly-handled pandemic responses in the developed world. It’s hard to believe it’s not satire when your university tells you: “Hey, we care about your health, now go visit an airport during a pandemic.”

This news hasn’t been uniform, either. Not all American universities are issuing the same guidelines to their students abroad; while there’s been a total recall of Americans from some European countries, some students in “safe” countries - like New Zealand - have been offered a waiver if they wish to stay. Some of these institutions are providing last-minute travel costs, solutions for transfer credits, and reimbursements for the international fees paid to Otago. Some aren’t. Very few of these schools are giving students a choice. In the words of one American exile faced with covering her own expenses: “It’s total bullshit.”

A counterexample: the Singapore Ministry of Education announced in a 1-page press release exactly what measures would be taken: all students abroad will be flown home, screened, and treated, regardless of where they’re studying. It’s understood as a public safety issue, and no threats have been made with regard to their degrees. Singapore has suffered 0 fatalities. These students report that they expected this response, that it seems fair across the board, and there’s no room for confusion.

The most popular explanation offered by American institutions is a concern that their students will be stuck overseas with no option to return home. With the impending shutdown of international flights, many students fear getting stranded far from home, and institutions such as the University of Vermont (UVM) cited the uncertain future of air closures - rather than health and safety - as a chief concern (though UVM did not force their students to return).

Though the concept of getting stranded in New Zealand without active airlines is daunting, there are worse places that these students could be stuck, and many have expressed that they feel their agency has been stripped away. Along with UVM, Middlebury College is one of the few institutions that did not explicitly require its students to come home, though they would “certainly support” the choice to do so. They’ve offered a flexible grading policy this semester, giving their students some responsibility in the decision.

When faced with choosing between risking international travel or abandoning her degree progress at Otago, one Canadian student has devised her own solution: “Fuck it, I’m transferring. I’ll just stay here.”

British students are beginning to be recalled as well, and they’re not happy about it either: “I just feel like a bit of a loser for not staying. Like, I feel like I should just say yolo and stick around.” There’s a popular sentiment amongst those facing forced exodus: “it seems riskier to travel through airports than to just stay here. I’m from Cali, their confirmed cases are in the triple digits. I’m safer here.”

At the most depressing BYO I’ve ever attended, Americans painted a picture of communicative chaos. Some students have received as many as six emails from their home institutions in 24 hours, each providing different instructions and offering different demands:

“They sent us an email last night [March 15] saying we had a choice [to come home], because New Zealand wasn’t too serious. Then I woke up to an email this morning saying I had no choice. I fly this weekend.” If Otago doesn’t go online, this student will be robbed of a semester of her degree, with no plans for reimbursement. Her university hasn’t seemed to notice that.

American students have spent the last two days waiting for news from home. One by one, American universities are issuing recalls. “I’m going in and out of panic mode. It feels like the Huner Games: who’s next?”

Who’s next? Who gets to stay? Whose degree is in jeopardy? How many friends will they never see after tomorrow? How many have already left?

As I interview a sombre group of students, one receives an email in real-time. It’s one email in a series of many. This one reads: “This email supersedes all prior communication and must be answered tonight.” She, like many others, has just been given the choice of finishing her semester online or dropping out.

Students in New Zealand are being forced to choose between academic upheaval and the very real possibility of becoming an active Covid risk to the family members who will be picking them up from the airport.

By the time this reaches print, most of the students you’ve heard from will be in the United States. They’ll have risked international travel on their way back to families in a country with a fully-fledged outbreak. Their degrees will be up in the air. They won’t even get this copy of Critic.

“I’ve done my crying. No more tears until I leave.”