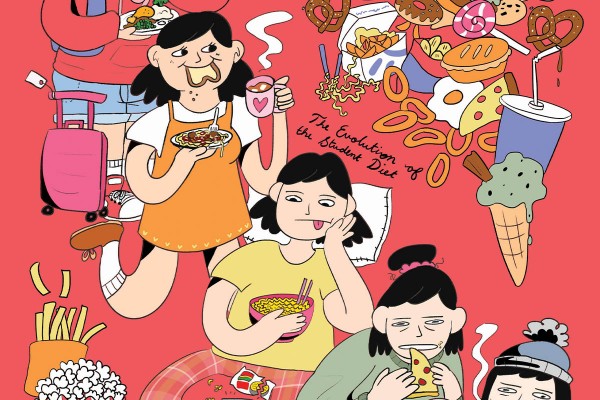 The University of Otago’s Guide to Eating like Shit

If you are in a college, chances are that you are being fed. A lot. Three meals a day plus snacks. Not all college food is created equal, but one thing is for sure, you aren’t going to starve. You, your scholarship or your parents are paying an average of $17,000 a year to be there, you want to get your money's worth - not to mention, food wastage is never far from your mind.

Come second year, however, this script is completely flipped. It is this year that the reality of our lack of food and nutrition education is revealed, and, for most students, this dichotomy of feast or famine sticks out like a sore thumb. Your food choices are no longer limited like they used to be, and you can bet that for every one student who is eating 5+ fruit and veg a day there are five students living on pasta. Not only that, but when you can decide when to eat, it makes swapping dinner for a bunch of energy drinks so you can keep studying on campus all too tempting.

Chances are, if you are reading this, you are going through the same thing. Critic spoke to several students about their experience of this transition. Although not everyone will fall into the trap of shit eating patterns, some students we spoke to lacked the knowledge or tools to feed themselves and make healthy decisions. The fact that so many students fail to do so adequately, and even consider this an expected part of the student experience, begs some consideration: when did it become so socially accepted that students should eat like shit?

According to several students, their poor eating habits began once they left home and joined a college. Although this wasn’t their first time on a breakfast/lunch/dinner schedule, they said that the extremely structured and small timeframes where meals were available meant they frequently skipped meals to stay on campus to study. Also, that the nexus of large quantities of food available and concerns about food wastage (not to mention, wanting to get their damn money’s worth) made them feel pressured to overeat.

Albie* said “I put on a massive amount of weight last year, and I’m still trying to lose it.” He said that he and his hallmates “were encouraged to eat all the food we [could] because we [wouldn’t] have it for much longer”. He also said that although there were healthy options, “no one went [for them]”, and that there was “so much food available that people would go for seconds, and thirds” to “make the most of it”. Albie feels like this has set him up for unhealthy eating patterns, which he is still struggling to shake even after moving back home.

Sally* said that “structured meal times fucked me up” and that she was “encouraged by everybody to eat as much as [I could],” leading to her eating “way too fucking much”. She also said that having to study meant she would “wolf food down so fast, as it [wouldn’t] be available at any other point”. Overall, Sally believes that her hall experience made “the transition [to flatting] harder”.

Janet* noted that the hall food was “really repetitive” which made the healthy options “not appealing”. She said that her hall was actually blocked from Uber Eats at the end of the year as everyone was trying to buy alternative meals. For Janet, her hall experience led her to develop “an unhealthy relationship, and a negative attitude, towards food”. The structured meal times also threw her off as “who the fuck is hungry at 5pm”. When exam season came around, she ended up not eating at all.

Steve*, who worked in a college kitchen in 2017 and 2018, said that “there was an element of novelty” to hall food, which meant that he’d “choose unhealthy options more often, such as eating the desserts”. He also saw “a bunch of people (boys in particular) piling up their plates” with unhealthy options, and noted that “overeating was definitely a thing”.

Catherine* said that, in her hall, she was “pressured to eat more than usual” and that the plates were large so “it was easier to serve yourself more food than you would usually eat, and there was pressure to finish all of it because you didn’t want to contribute to food wastage”. She said that “the pressure was on students rather than the staff”, and that there was “nothing to help moderate serving sizes”.

Holly*, actually “reached the peak of [her] binge eating disorder” during her time in a college. She said that she “would eat so much because of the pressure to have everything that was available”. She ended up “compensating by going to the gym, and [would] feel really bad about her eating habits”. Holly also “felt pressure to not waste food” and said that the “sheer size of the meals” was an issue, especially as everyone was served the same portions, although not everyone would need to eat the same amount.

Many of these students recognised that halls are forced to structure their meal times, and any perceived over-catering was in order to feed hundreds of students at a time. However, considering how important student wellbeing is to residential colleges, it’s not a huge stretch to expect more student support around healthy eating. In the piece on food wastage Critic ran last year, a university spokesperson stated that 80kg of the food waste in halls comes from resident plate waste. To combat this, there are many posters in halls encouraging students to stop food wastage. The students we spoke to believe that this burden on students to reduce waste, in reality, has encouraged overeating.

But the story doesn’t end there. Many students leave halls to find that their unhealthy relationships with food often carry on to their flatting years. Some find that StudyLink doesn’t pay them enough to adequately cover rent and meals; and let’s be real, a chunk of it is usually reserved for getting steamed with your bradas on a Saturday night. Student flatting situations therefore almost always fall into a lower socioeconomic bracket, and an unhealthy relationship with food means it becomes a lower priority. It’s not uncommon for flatting students to start subsisting exclusively off $1 New World bread, or simply skipping meals.

Janet, a second year, said that “I’ve got no money right now, [so] I’m not eating unless people donate me food”. She also said that she has friends who make no effort to learn how to cook, even though they can afford meals, and “what they’re putting into their bodies [is] just disgusting”.

Catherine noted that since she started flatting, she “[tends] to not eat,” as she has long days and doesn’t want to carry food around. She also tries to stay away from buying food at the University as it is expensive. Growing up with little money, she says she has learnt to “be fine with subsisting on an orange and a muesli bar” for the whole day, but that it shouldn’t have to be the expectation for most students.

Priti* had to be in a studio room close to uni for health reasons in her second year, and “lived off cans of creamed corn and stale croissants for two weeks”. She noted that there “isn’t a good cheap source of food available for students” or low-income households in general, as “vegetables can be expensive”. She said that she believes a large influence on student diet is the societal idea that “it’s ok for students to eat noodles for a month,” and that when she told people she lived off creamed corn and croissants for two weeks, they laughed about it. Priti said that at the time she laughed about it too, but that looking back it’s unacceptable for students to be “living off stale food with no nutritional value,” and that there shouldn’t be “clout associated with eating like shit”.

She also said that it’s “one thing to tell someone to eat well but there’s no support,” and that we are “not doing enough about it [and] just laughing it off”. Additionally, “forgetting to eat because of studying becomes positive,” and “really bad eating habits in general [has just] been accepted by the student body and the University”.

Jack* said he felt there is “no practical advice on how to be healthy by yourself… bad nutrition impacts mental state, ability to retain information, ability to sleep, exercise, or do anything.” As students are already spending 40 hours a week studying, there is low motivation to self-learn about nutrition.

Ruth Zeinhert, a registered nutritionist in Dunedin, said that “basically when it comes to good health, what we eat is the most important thing. Exercise, brain functions and bodily processes all come back to the fuel we ingest.” She said that it “doesn’t matter if your diet is bad for a few days in a row, but over the course of a week people need to be getting adequate nutrition.”

As a nutritionist in Otago, Ruth says that it’s “common to see people with poor diets” and that “lots of it comes down to lacking skills in the kitchen, which is probably true for students as well”. She noted that the student diet is a bit of a “societal joke,” and stated that “to an extent, there will always be pockets of students who struggle financially and have poor diets”.