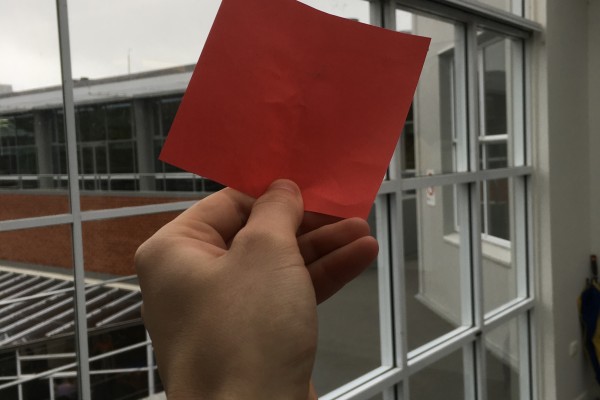 Pull Your Red Card: You're Running Out of Time

Hosting red cards are good fun when you get everyone in the flat involved and make everyone do some wacky stuff. Whether it’s interactive challenges on the streets with strangers, or just a lock-in to enhance the flat bonding experience, red cards are an ideal way to forget that university assignments, tests and exams even exist. Red cards are even better when they get pulled on an ordinary weeknight when there are no other parties or gigs on - getting drunk at the flat while other people are at the library studying or just having a quiet night before lectures the next day is big dick energy.

What happens at a red card stays at a red card. Everyone gets stitched up, and no one will remember the secrets you spilled or the nasty things you got up to … unless your mates film you (but then, just blackmail them until they delete the footage). Hosts love to be in charge, yet they also want their guests to have fun, so everyone needs to commit to the drinking games. The games only ever last the first 20 minutes or so before everyone is way too drunk to listen or understand the host, and thus are uncapable of playing the rest of the games. I would advise hosts to not get offended when your flatmates are on the ground, too unconscious to continue listening to your excessive list of rules.

To take your mind off your upcoming exams and final assignments, here are some memorable red card experiences that students have shared with Critic.

“Rounded up all the boys and had a Court Session.” [We’re guessing this was submitted by a high school rugby team].

“I hosted a Prom red card – the brief was to wear prom outfits bought at the op shop (think poofy dresses and oversized suits). I then paired every boy with a girl… scavenger hunts, smash a bottle of wine together, finish a box together, 7 minutes in heaven (we hid a phone filming in there the whole time)… and all 12 couples got LAID.”

“Having the fuel light on in any situation is anxiety-inducing; pulling up on the gravel road of the Gloriavale community is bowel-emptying. Prayer Darling greeted us and gave me a stern word about replying to emails on time. Standing there in an eerily deserted town that was meant to house 600 people, the Haupiri Messiah himself approached – Hopeful Christian. No time was wasted on God’s holy watch; the walking sermon was delivered in classrooms, houses and finally the Great Hall. The Hall was home to a Hogwarts style dining set-up complete with a life-sized and operable papier-mâché brontosaurus. It towered opposite the news bulletin, a carefully censored selection of Stuff news articles, mainly highlighting the rampant HIV crisis (“Homosexual Immunodeficiency Virus” according to Hopeful). Following a Town Meeting (involving several ‘Hallelujah!’s), we were treated to a surprisingly good dinner (home-made ice cream!) and a stay in the family rooms. The morning was disappointingly non-culty; drowned in Gloriavale propaganda videos (who the fuck even owns a CD player these days) and excellent muesli, we were treated to a free tank of Gloriavale Unleaded 91 and were on our way. Thanks Gloriavale, we’ll be back. RIP Hopeful.”

“Pulled a red Uno draw four on my mate who was about to play his last card. He was pissed.”
“I pulled a Russian Red Card where everyone had to buy either a bottle of vodka each or share one between two. Every time I said “Nostrovia” meaning “to good health” as a toast, the rest had to repeat the word afterwards while toasting and taking a shot of vodka, eating a gherkin as a chaser and then some rye bread afterwards. By the time we played Russian Roulette, most of us had finished at least half a bottle of vodka. I ended up finishing a whole bottle of vodka and the snapchat videos on my phone just says it all… 100% recommend pulling a vodka themed red card.”

“Hawaiian luau theme: We filled multiple carloads with rubbish bags full of illegally stolen sand from Tomahawk beach. Poured the sand all over the hallway/lounge/kitchen floors to imitate a beach vibe. Coloured lightbulbs throughout the house, all reds, pinks, oranges. Everyone dressed Hawaiian theme obvs. Made everyone funnel a bottle of Wipeout (the poor man’s Malibu), and we bought a half ounce and rolled it all into joints and randomly handed them out to people every hour on the hour. All the spew, spills, trash, roaches and ciggie butts ended up in the sand and shovelling all that mess up the next day was fucking feral. Worth it.”

“Turned up to the library during the day with a bottle of wine secretly in my bottle that was completely covered so no one could see it was alcohol. We had to finish our drinks without getting caught for being somewhat drunk. Definitely doable.”

“We all left the flat to streak the streets. The first person to get back inside had to drink something feral, but the aim was to run outside naked for as long as possible.”

“The theme was to dress up as what represents you best, so I went as the animal that I am. I dressed as myself. Everyone had to drink a certain amount of drinks before that particular time. We drunk 8 standards before 8AM before doing shoeys, rhinos, funnels etc.”

Good luck to the people pulling reds before exams!