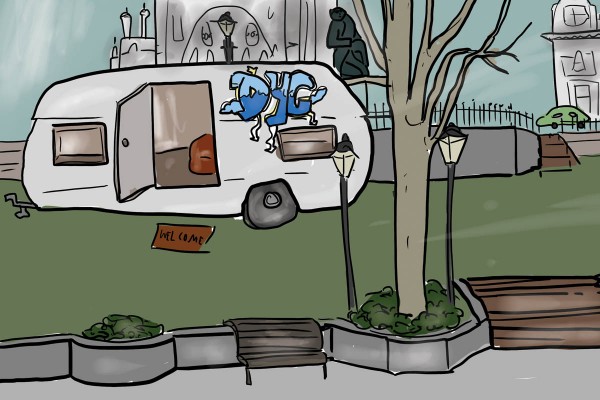 When I was 17 years old, I wore too much eyeliner and thought Benedict Cumberbatch was genuinely attractive. I also joined a fledgling group called the Dunedin Youth Council (DYC). In my two-year term, I witnessed horrific ratepayer spending, chaotic organisation and general unbelievable fuckery.

I know bitching about a small group of high schoolers involved in civic education is an odd cause, but bear with me.

It’s early September. Myself and others join the newly established DYC, a supposed bridge between young people, the community sector and local government. A representative from each high school is chosen to sit on the council, which had received $51,500 from the Ministry of Youth Development to pay for our activities and a ‘Youth Council Activator’ (an adult supervisor).

Council member Joe recalls joining because “it seemed like a good idea”. He pauses. “It wasn’t a good idea. It was like a daycare.” Joe only attended about five meetings and estimates that he ate about “$200 worth of food” because every meeting they provided “curries from the posh Indian places. I [also] ate a lot of chicken nuggets at laser tag, so that can’t have been cheap.”

From the get-go, spending was a huge problem. The last few months of the year were spent brainstorming an acrostic slogan.

DYC need a logo so they hold an art competition encouraging students to draw one. We receive about 12 entries and the winner receives $300 worth of prizes. A graphic designer is then paid $1000 to “finalise” the vision. I encourage everyone to Google this logo; words can’t describe it.

Council member Josh recalls similar problems to Joe. “The majority of the budget went to food for the meetings, which I think was originally $2000 a year.” He notes that this attitude towards spending was encouraged. “There was a vibe that it didn’t matter what you were spending money on, just spend the money so we have something down on paper that we’ve done.”

Enter the dreaded Caravan Incident of 2016 - an attempt to buy a $23,000 caravan as a youth pop-up space, which was “a complete mess”. The plan was to “put it in the Octagon and people would sit in it”. Josh points out that “this was a very small caravan […] we could fit six to ten people in it, maybe?” Another issue for a high school council was actually moving the caravan. “I don’t think anyone involved had a license and a car to move it.”

There were months of “heated” discussions, but eventually, the vote turned against the caravan and the DYC opted to buy a $500 tent instead.

Other spending included “giving away free ice cream at events attended by high schoolers from rich pseudo-private schools,” a giant Jenga set, and new wall decoration for the library teen space. Probably the most useful thing the DYC did in this time was set up a “Youth Ambition Award” where $600 was given to a Queen’s High School group to establish a school vegetable garden. Also $400 was given to a Columba College student to create a democracy club that discussed debating and politics.

This is Tyler’s second year on the Youth Council, after what he describes as a teething process of “having a bit too much control of the money at the very start”. The budget has been cut to $10,000 a year (where it has remained to the present day). Tyler believes that the DYC is worth the taxpayer money, but describes having some problems. “We had failed projects and arguments and delays.” He attributes these problems to “the amount of red tape that the DYC had to jump over to even get the opportunity to talk to the City Council”.

This view is echoed by almost everyone spoken to. Member Khaleeda said she was “very naive,” when she joined. “I was just getting into UN Youth and I was like ‘yes politics, this is cool’”. She recalled some of the DYC-initiated events, such as a debate at Otago Boys for youth representatives from political parties, as well a quiz night, but agreed these events didn’t need the Council’s level of budget to be run. “At the end of the day, we were high school students, with no experience of how to do this sort of thing. No one there wanted to waste money, but it was just like, how do we do that?”

During this time the group created a mini-series called “Youth of Dunedin” that apparently spanned a whopping two episodes, if their Facebook is anything to go by. Their first episode was just three minutes of interviewing Josh Smythe. DYC member Nathan had also served two years by this point and says: "I cannot think of anything that the DYC achieved during the time I was on it.”

The DYC run another quiz night, as well as a TED-style conference, but fail to get enough artwork submissions for a planned exhibition of young people’s visual artworks. A DYC concert gets the plug “pulled at the last minute” after months of planning, according to member Elliot. Khaleeda confirms this. “We had this huge hiccup and we had no process to pull back on.” Despite the monetary support, Khaleeda points out that it’s “hard for that end of the youth council to be upheld if there wasn’t actual physical support from the council”. When Critic brought these allegations to the Dunedin City Council said “In general, DCC staff are there to guide the group and help them weigh the pros and cons of activities and act as support.”

Current member Jamie* describes the majority of the DYC’s work as “behind the scenes” - where organisations will come in and ask members for their various opinions, such as removing sugary drinks from high schools. Last week they also hosted an event for year 13s to meet candidates running in the local body elections which apparently was relatively successful.

Jamie said “we put quite a bit of our budget towards a council initiative called the Youth Vision where they get businesses to pledge to do their best to make their businesses benefit youth.”

It’s weird that the DCC has given money to the DYC, to then have it funneled back into a different DCC project. Almost like some kind of weird money laundering. But hey, at least it’s better than giving away free ice-cream.

I asked the DCC to describe examples where the DYC has helped youth in a meaningful way considering the size of their budget, and they basically said the same thing: “The DYC has been involved in the development of the Ōtepoti Youth Vision, a vision for all Dunedin’s young people. They played a key role in engaging with youth around the DCC’s 10-year plan and encourage youth to have a say in key issues the Council is consulting on e.g. the Reserves and Beaches Bylaw and the Central City Plan.”

I couldn’t find anything online that defines what the “Youth Vision” actually does, apart from a lot of wishy-washy stuff about “helping engage the wider community in considering youth”. The only undertaking that Youth Vision has done so far is (shocker!) another art competition. The Ōtepoti Youth Vision is also backed by wider organisations such as the Ministry of Education, Otago Community Trust and the Ministry for Social Development, so you can’t even really give a lot of credit to the DYC on this one.

Although Tyler notes that DYC “continued to get better with our spending as time went on,” the budget is still a concerning factor to him. Elliot said that “$10,000 is a drop in the bucket compared to other things, and the experiences and great things that come out of it are absolutely 110% worth it”. Josh believes there is potential for the DYC to achieve good things, but the budget hasn’t been used well. “Unless I could see a direct benefit coming out of the money being spent, then cut the budget even more.”

The DYC members aren’t to blame - they’re all optimistic and politically engaged and that’s wonderful. The DCC, however, are not blameless. Giving a bunch of 13-17-year-olds a tonne of money and then stepping back to watch the result is not only fiscally irresponsible to the ratepayer, but it’s also stressful to heap that responsibility onto kids that should be figuring out NCEA, not planning a local concert.

If the DYC is to continue, they need more input from the DCC. It’s not enough for the group to function just as a tick box for youth support behind council projects. As Joe says, “we just existed to make someone look good so a councilor could say they fulfilled a promise.”

*Name has been changed for political purposes.