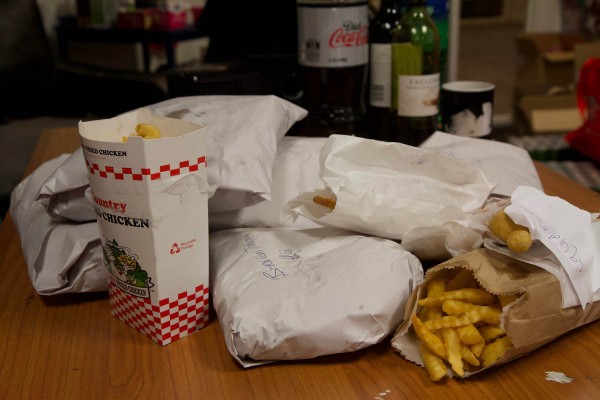 Fish ‘n’ Chips are a humble feed certain to satisfy even the fussiest and skint. Chips are vegan and gluten-free; those with dietary requirements have no excuse. Tell your flatmate to retire their weekly rotation of spag bol for the night and go suss the flat something they actually want to eat. This is Critic’s 19th year of reviewing North Dunedin’s fish and chip offering, assessing each store on their fish, chips and battered hot dog. 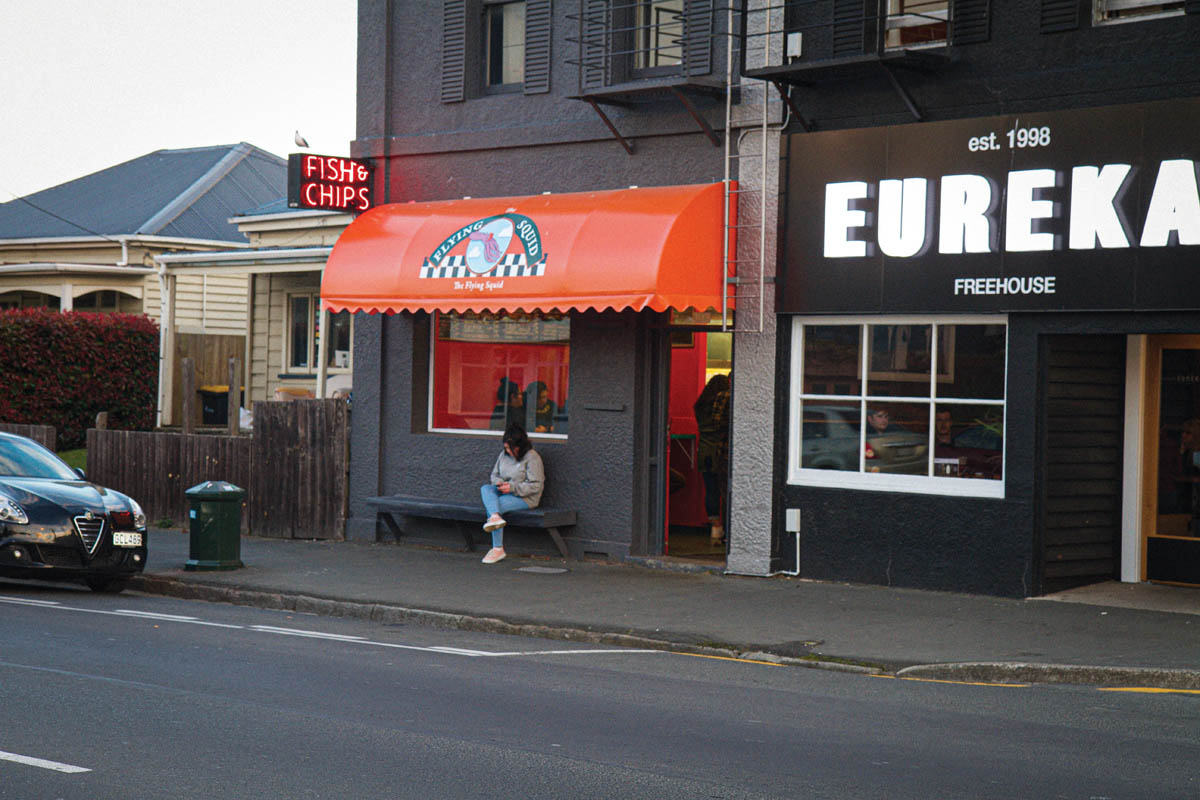 Squiddies is a prized establishment on Albany Street, although they have performed averagely over the last few reviews. Their paper bag chip parcels have wormed their way into the hearts of students, clogging arteries and upping cholesterol along the way. These are good wake-up-wasted chips.

The hot dog slapped. The red colour of the wiener had dyed the batter pink, which according to Features Editor Chelle, makes it a “real hot dog”. OK, Grandma. Taste-wise, the dog was nothing special, but the batter was nice and crispy, which when lubed up with tomato sauce, was a pleasant experience. The dog had a battered stick, which we give an extra point for, as it’s generous and emits big dick energy.

Squiddies fish was a triangle shape, which was fucking weird. Critic Editor Charlie was frightened, saying, “I’ve never seen a fish shaped like a triangle”. Critic theorised that Squiddies must pour fish goop into a triangle waffle maker before frying it. Staff Writer Erin likened it to the fish she was given for Selwyn dinners. Ultimately, the fish didn’t taste or feel like fish, which Critic deduced, was only a good thing. Chelle called it “McDonald’s chicken nugget realness”.

Not toad in a hole.

Willowbank Dairy is a cult institution, loved by those living slightly north of North Dunedin. The chips were astoundingly good. The texture was good, the amount of oil just right; they were crispy and well cooked. They had an addictive quality and (spoiler alert) were our only chips awarded 10/10.

Willowbank’s hot dog was too thicc and doughy for many of our likings. “I don’t want batter that is like bread,” Charlie said. Erin rightfully added, “this is not toad in the hole”. Some went as far as to say the hot dog didn’t even taste savoury. Sinead, Chief News Reporter and self-proclaimed dog expert, said it was her favourite of the night but as the majority we will overrule her and call it out for being average.

The fish was edible and distinctly fishy. You could tell it had indeed come from the ocean and once been alive. 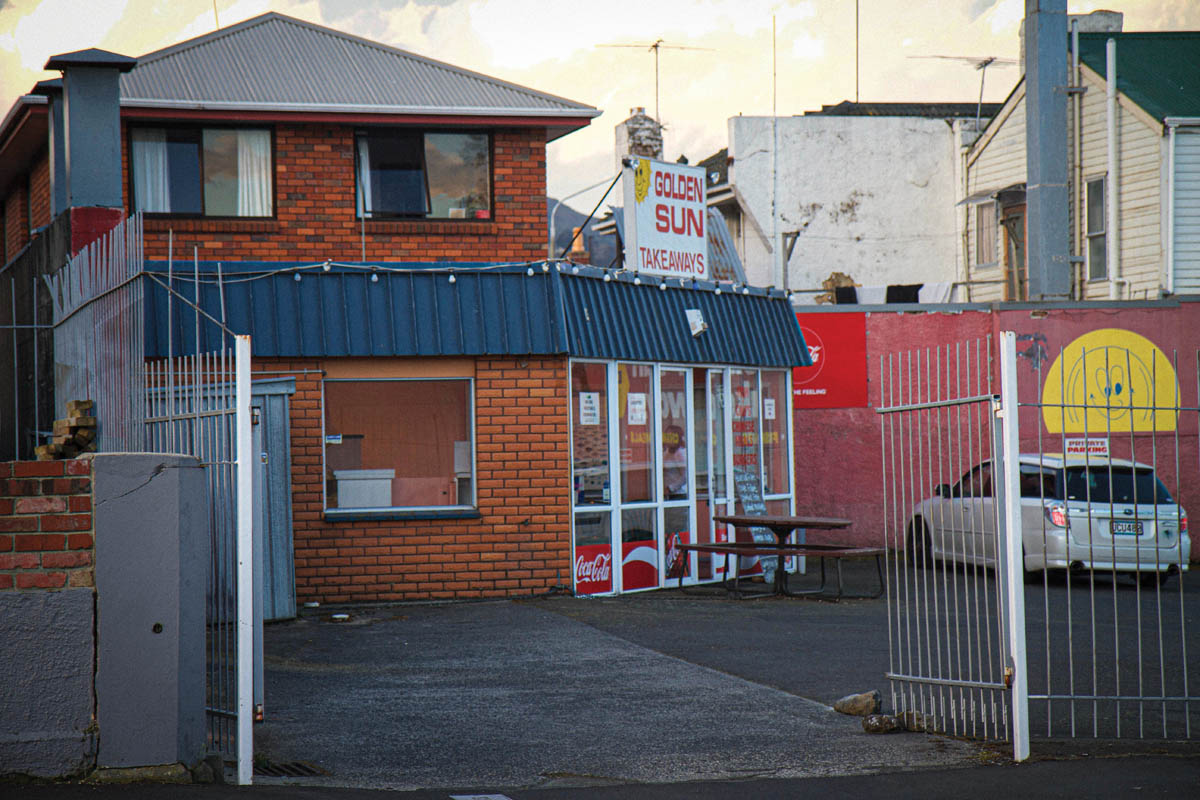 Straight off the bat, Golden Sun wins points for civility as the guy working there did not yell at us for parking in the car park before realising we were coming in to order. They also do a deep-fried cheese roll. Do with that information what you will.

The chips cost $2 a scoop. They had an overwhelming amount of grease and underwhelming amount of salt. “That’s wet,” said Erin. Critic Volunteer Wyatt noted that he’d never need to buy olive oil again, as he could just rub the paper on his pans. Classic Wyatt. The portion of chips was pretty stingy. If we could estimate a ratio of grease, salt and chip it would be kony 20:1:2.

The hot dog, costing $2.40 was soggy and small, like the smallest pink penis you’ve ever had or seen.

The fish was significantly better than expected, with a collective round of “good” muttered by every member present. It was also value, at $2.60 for a piece of Hoki. Chelle noted she could see tendons, which we are pretty sure fish don’t have (she didn’t really deserve that BSci). However, it can be inferred she meant it was indeed a fish and that it was fresh. All in all, a mixed catch at Golden Sun. 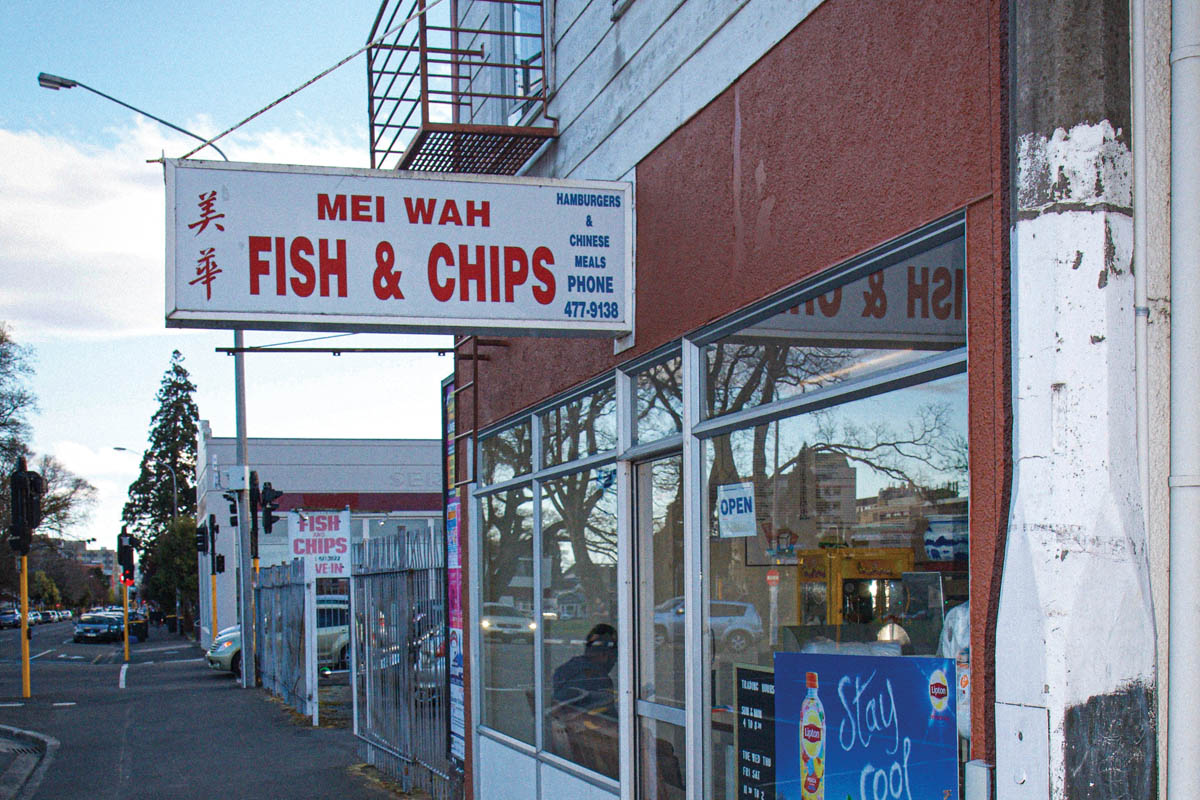 The winner of our 2018 Fish and Chip Review. Last year, unwrapping a parcel of Mei Wah fish ‘n’ chips was likened to a wedding night fantasy. This year, unwrapping our parcel had us feeling like a jilted bride. It’s also to be noted that Mei Wah isn’t open on Sundays, which, due to its location on Fatty Lane, is straight up just a poor business decision.

The chips cost $2 and came in a brilliant shade of Simpsons yellow, however the serving was a bit stingy and the chips weren’t quite crispy enough. Guest reviewer, a.k.a. scavenger extraordinaire, James Heath diplomatically said they were “a little bit undercooked”. Whatever you say, Mr President.

The hot dog was heavy and felt really nice in your hand. Critic Groupie Ceri decided it was the most phallic hot dog of the evening. It tasted pleasant and pink, just like a hot dog should, and remained firm down to the last bite. One of these puppies will set you back $2.30.

The fish cost $2.50 and was rather oily, but we didn’t mind as it had a nice and crispy exterior to counteract the grease. If it were up to the fish, it would have never left us at the altar. 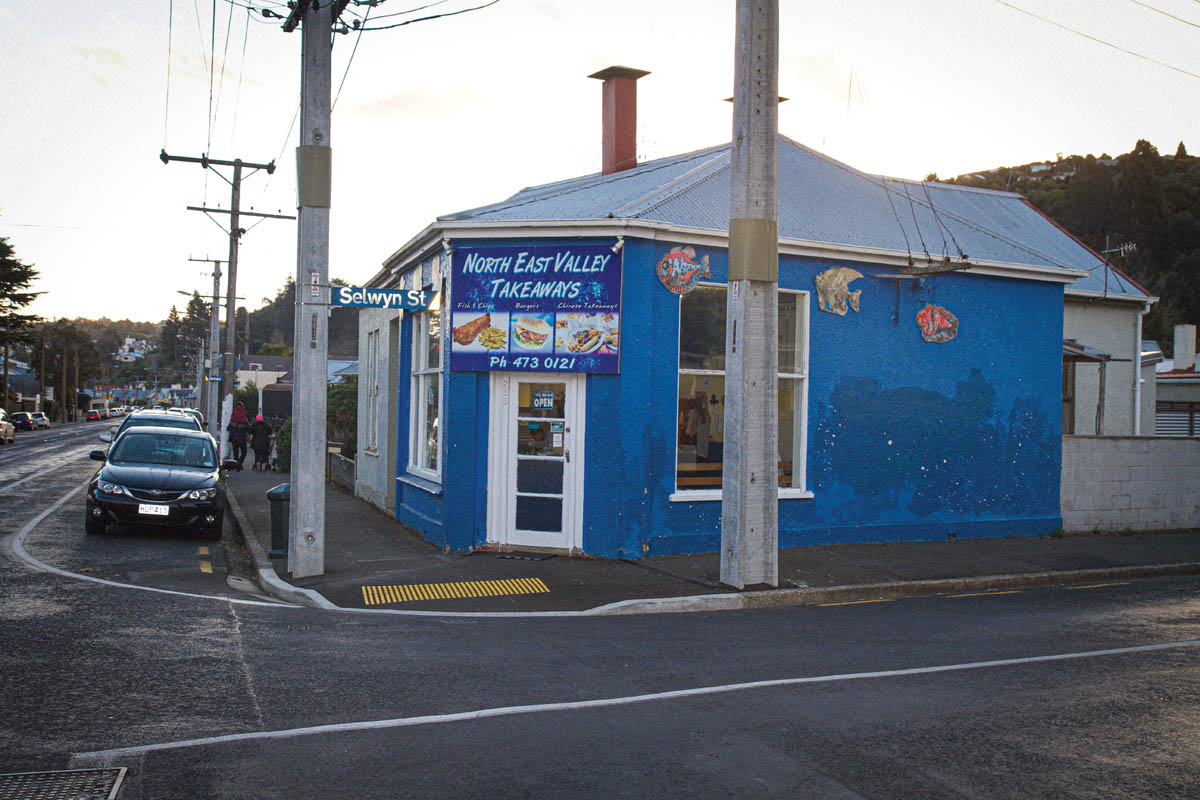 Ocean Fresh kept us all on our fucking toes, man. The meal was a roller-coaster start to finish and we were all just grateful to be feeling. The chips were not fresh and they were not from the ocean. The chips tasted stale and were a bit chewy, which had us all feeling really sad. They were also a colour that Ceri “couldn’t trust”. They were not worth the $2 we paid.

The fish confused members of Critic staff due to possessing girth and length exceeding even the well endowed battered sausage. Costing $2.50, the Hoki fillet had a crisp batter and, true to brand, the fish was fresh and definitely from the ocean. The fish had a tangy flavour according to Charlie, whose only criticism on the matter was that he wasn’t high, “otherwise I’d give it a 10”. 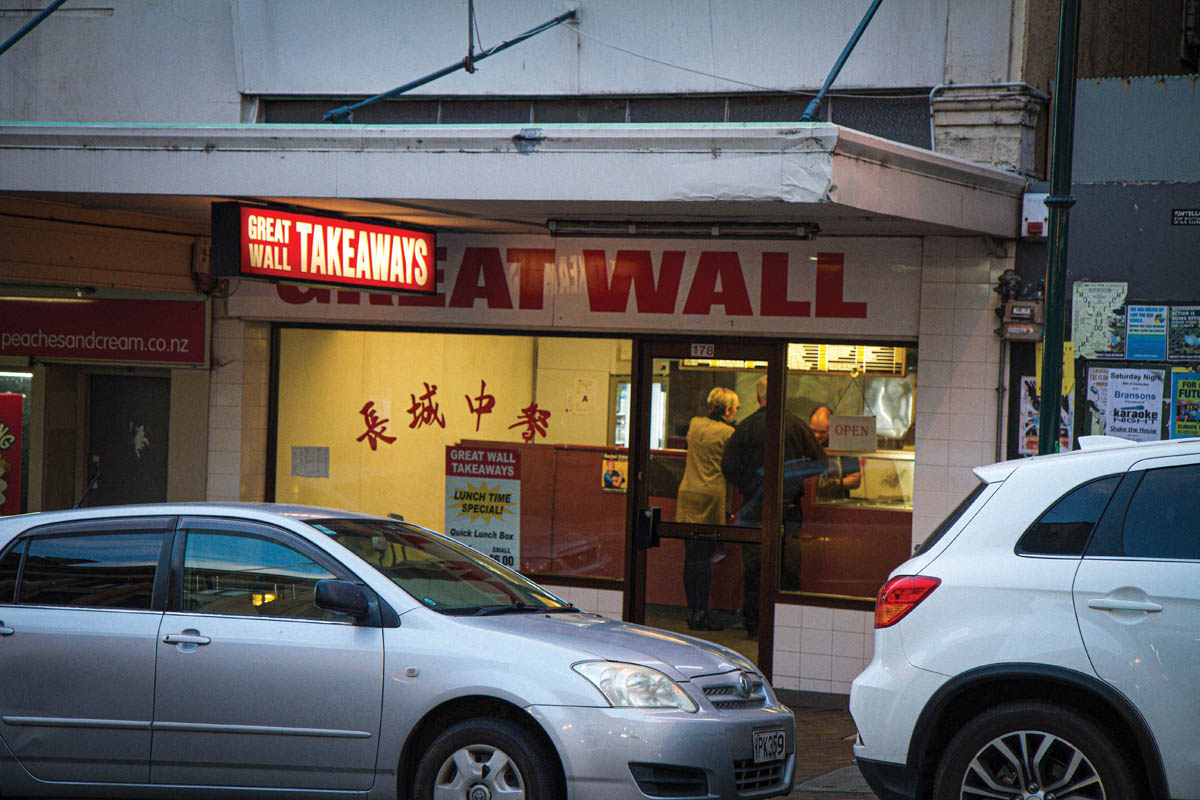 The dude that works at Great Wall is lovely and they sell caps (the kind you put on your head, not the chill buzzy kind) with their branding on them. Apparently they’ve been around since 1987. Cool. Opening the paper packaging resulted in a sexy ‘OooOOoh” from everyone in the Critic office. Every item cost $2.50; Chelle called the chips, fish and hot dog trio from Great Wall “the CBD businessman’s meal”. We just really love an underdog.

The Hot Dog had a slit, which was minor imperfection; aside from that it was perfect. Great Wall knows that you need to learn to love your insecurities.

The fish was delightful and fresh, with a slight bite to it. It was soft and creamy with a crunchy batter. It was everything fish should be. Everyone said they loved it. We could not fault it.

“How could it look so good but be so bad?” 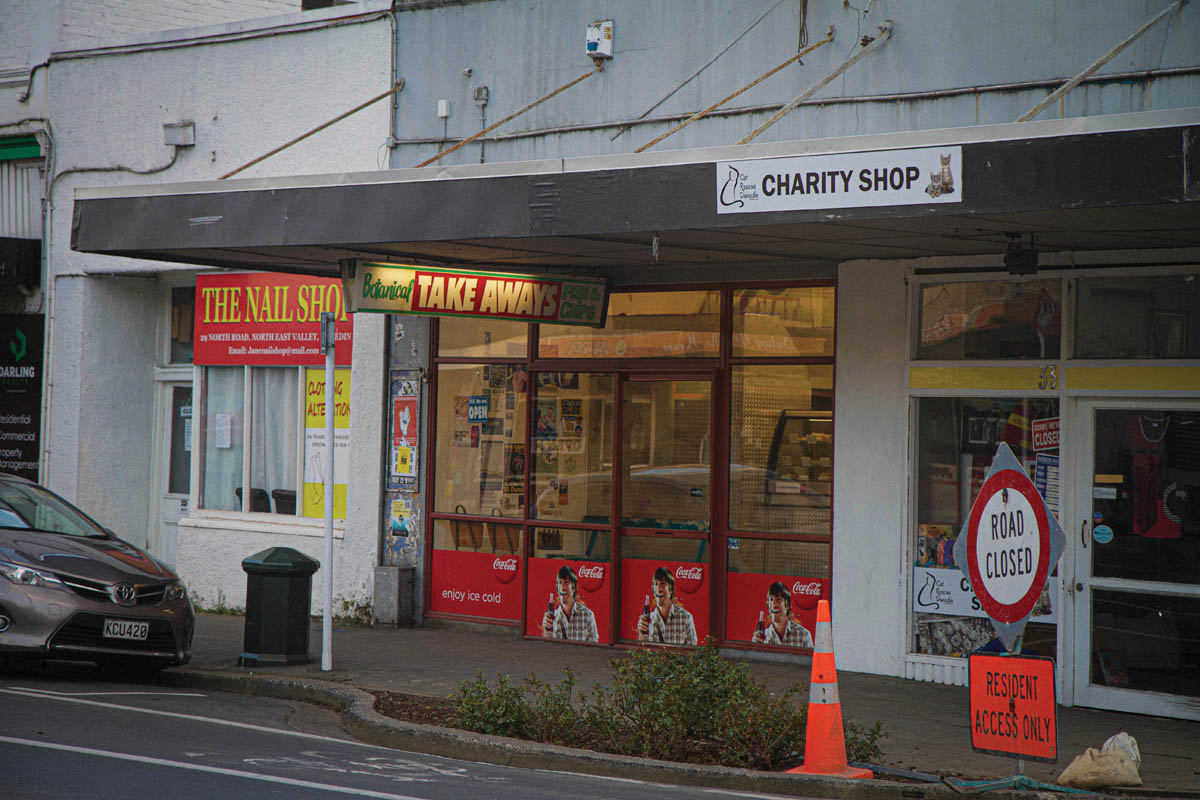 Botanical Fish ‘n’ Chips were all over the place and ultimately we felt catfished. Prices were bog standard, $2 for chips, $2.30 for the hotdog and $2.60 for the fish. Despite being an attractive offering, their personality was so bad we had to shaft them. We do feel kinda bad though, as they are clearly going through something. Chelle expressed the logic to her disappointment, saying, “this is a Monday, not a busy night. They had time to get it right. They ain't rushed - they can put love into this. They can do better.”

The chips really let them down. They tasted of burnt oil and we couldn’t eat more than a couple each. We were also pretty full by this stage. Culture Editor Henessey said, “I fuck with them because I like burnt food,” but coming from someone who doesn’t like fruit, this had little standing. Their chip ranking is in the negative.

The Hot Dog was a shit hot dog. No one said more than that. We had mentally checked out of Gardens. The fish looked good but tasted old. Mutton dressed as lamb. “How could it look so good but be so bad?” Erin asked, shaking her head.

“If La Croix was a fish it would be this” 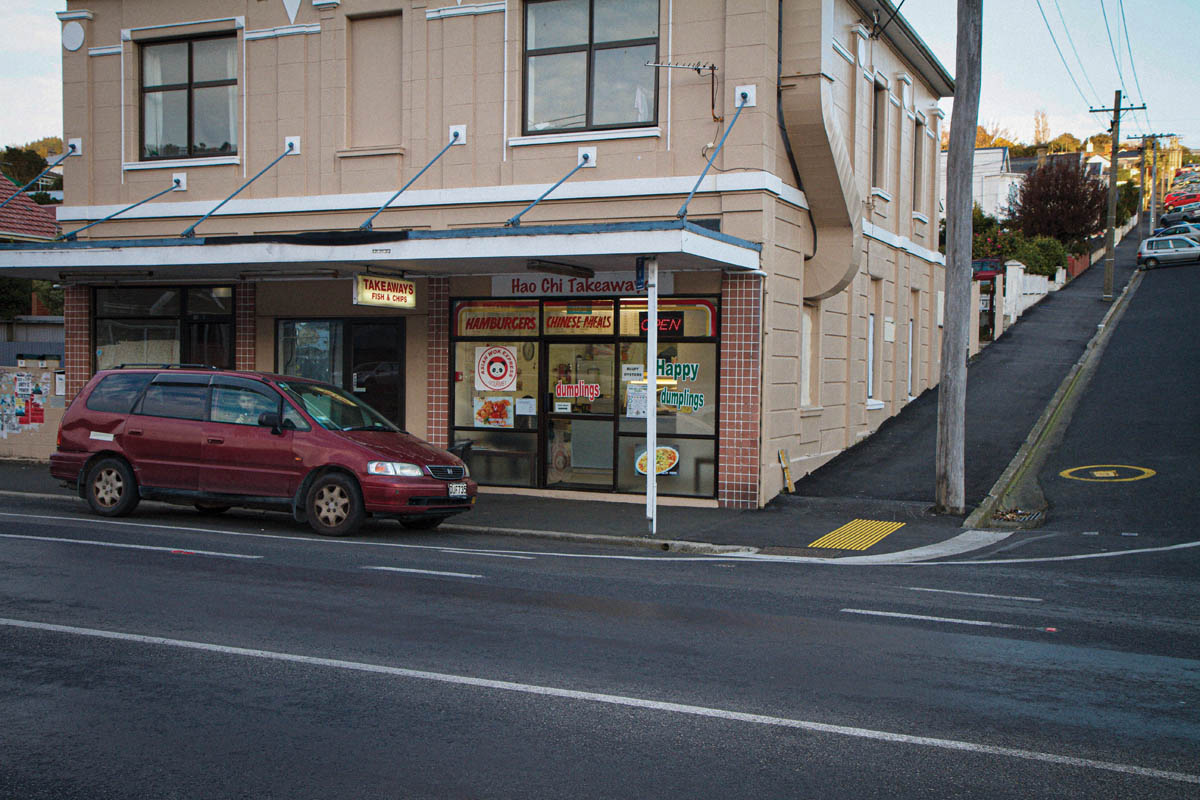 Hao Chi is the Goldilocks of the fish ‘n’ chip world. It’s not too bad, but not so good that you get attached and start sneaking off there every Friday after your flatmate's spag bol night. In other words, it’s just right.

The chips at Hao Chi were pretty greasy but texturally pleasing. Tasting notes were overwhelmingly canola oil and salt. The experience awoke something within Charlie, and he announced a weird kind of childhood trauma – having never had salt in his food growing up. This meant that he had trouble eating salt in adulthood as it “hurts his mouth”. He didn’t like these chips. We ignored him.

The hot dog allegedly “spoke” to Chelle, with a crisp batter right down to the stick. It did indeed have that highly sought after big dick energy. The flavour was a bit bland and nothing special. No point having a big dick if you don’t know how to use it.

The fish was relatively unfishy; a lite fish, so to speak. It was a generous size, causing Chelle to ask, “what part of the fish is this?” While nothing amazing, the fish was inoffensive. Sophia stated, “if La Croix was a fish it would be this.”

Great Wall won Critic’s 2019 Fish ‘n’ Chip Review by a country mile. A triple threat, they excelled in every category. Although, at the end of the day, Rugby was the real winner.