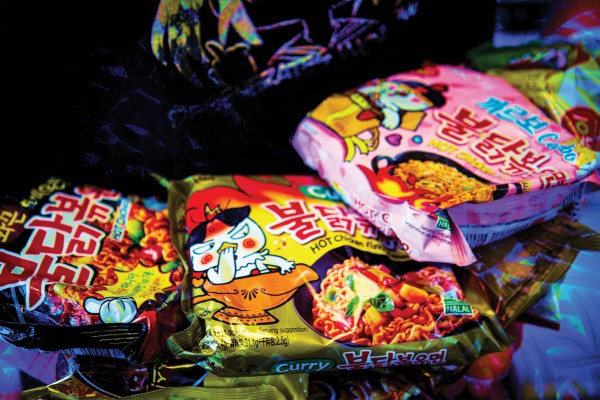 Instant ramen has been the stereotypical broke student meal for decades. Grab a pot, boil some water, and you have a meal - it’s great. But if you’re planning to spend most of your mealtimes eating instant noodles, then you need to know how to shake things up. Variety is the spice of life, after all.

Alright, full disclosure; I do not eat instant noodles. The last time I ate a packet was probably in 2015, and I always ate the same flavour, Maggi Beef. You may think that this renders me unqualified for the prestigious position of ‘Critic Noodle Reviewer’, but that’s where you’re wrong.

I have a virgin tongue, untainted by all the flavours proffered by the kingdom of the instant noodle. I am the perfect person to explore the bountiful harvest available to us. I set off to UniMart with Critic’s resident Korean translator, and we settled on a fine selection of North Dunedin’s prime instant noodles. Here’s the definitive Critic guide to instant ramen.

These “Rich & delicate beef flavoured Gomtang noodles” were the most mediocre, baseline food I have consumed all year. They weren’t bad, not at all. But they weren’t good. They were the food equivalent of that 2500 word linguistics essay you wrote the morning it was due.

The packaging shows a gorgeous bowl of noodles topped by three tender, petite slices of beef, accompanied by vibrant kimchi. Being the whitest man around, I only ever had instant noodles with those veggies that Maggi give you. I thought “ooo kimchi, that will be a wild new experience”. This was not a wild new experience. It’s flavourless and adds nothing.

I thought that being mediocre made these noodles bad, but then I tasted some of the others, and now I want these back.

Yeah, this one is fucking disgusting. I assumed that these would be barbeque flavoured, due to the brown sauce on the packet.

I was quite excited to tuck into some barbeque noodles, but when I opened the sauce sachet I discovered that this was not what I imagined. The sauce smelt wrong. I swirled the marmite-like goop into the noodles, retching slightly, and took a bite.

It turns out the mystery sauce is “mushroom” flavoured, and it’s also inedible. One bite was enough to put me off noodles for a week.

Also the little seasoning packet has something a little unconventional inside it. Comedically tiny slices of dehydrated artificial egg. They’re ridiculous, yet adorable.

These noodles were genuinely delicious — until I swallowed. The delicate taste of curry is shattered by pure hellfire. It’s stupidly hot. This might just be my Caucasian taste buds, but this was inedible levels of spice. I couldn’t savour the curry over the pain.

The initial curry flavour is really nice, however the chewy bits are terrible. According to the packet these bits are dried potato fries, dried carrot, and the mildly concerning “textured vegetable protein”, which tastes about as good as it sounds.

Somebody actually thought mixing dried cheese powder with hot sauce was a good idea. I picked this ramen because the packet was pink, and it had a cute chicken with a nice (and expensive looking) haircut on the front. I thought it would be a fun, cute experience. I was wrong.

Mixing this terrible concoction is the worst part. The cheese powder looks exactly like something you shouldn’t eat, and smells the same. The sauce is thick and dark, and really shouldn’t be mixed with powdered cheese.

Once you mix the powder out of sight and get past the horrid smell it gets very slightly better. The cheese tastes terrible, but the spice isn’t awful. It’s flavourless and uncomfortable, but not awful. It also erases the initial cheese hit. Overall it’s edible. It’s terrible, but edible.

Did I enjoy this? No. Does it have value as an exciting culinary experience? That’s a solid “barely”.

I was planning to have a consistent Korean ramen theme, however I saw a Japanese packet with the title ‘Artificial Chicken Flavour’ and I knew I couldn’t say no.

Holy shit, these smelt awful. Making these was visceral. I was dreading the first taste of artificial chicken flavour, but I had a duty.

It turns out that these noodles taste totally fine. It’s not just inoffensive; it’s actually pretty nice. I felt like Sam-I-Am. The smell doesn’t go away, but I found that the more I ate, the more I enjoyed it. This may have been Stockholm Syndrome.

These sweet and sour noodles were pretty damn good. The flavour isn’t invasive, and it hits a spot in my belly that makes me feel warm.

The broth is pretty great too, however I did spatter it all over my clean white shirt; it’s now covered in bright red spots, but I was so happy to finally find a delicious instant ramen that I didn’t care.

I looked at the finished product that Ottogi had delivered and I was shocked. This looked like actual, real food. It even smelled like real food.

It tasted about as great as artificial fish flavouring can get, and there’s a subtle kick of spice to shake things up. It had little dehydrated seafood and vegetable bits that, although a bit chewy, actually added to the dish. A highlight was the little pieces of seaweed.

I enjoyed every element of this meal, and actually left feeling nice and hearty. This is the closest that instant ramen can get to real food.