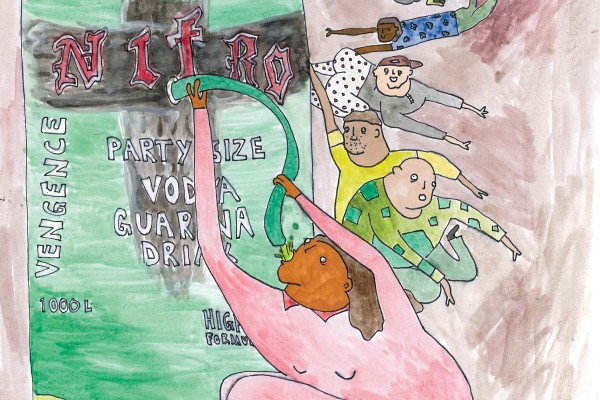 Nitro Stokes the Student Fire: How a RTD Pays For Student Parties

Also, drink every time you read the word Nitro.

As the only RTD containing both guarana and taurine, Nitro claims to pack the “maximum amount of caffeine legally allowed in New Zealand”. With their slogan “SLEEP WHEN YOU ARE DEAD”, a night on the ‘tro can feel like a fever dream. Their advertising features photoshopped clips of Queen Elizabeth II chugging back Nitro, women in sexy nurse outfits, freaky juggalo-esque images, and Santa pulling the finger with a woman’s ass next to his face.

Despite the questionable ethics of their advertising, Nitro, like your first draw on the glass BBQ, goes down an absolute treat. Peaking, you’ll feel the best you ever have. Six hours later, your heart is beating faster than 15-year-old you used to beat your meat. I’ve seen champions vortex the entire thing in one go, a move they described as “the ultimate hit”. The next day you feel like a lubeless slug.

So what happens when you get a whole bunch of students at an event all drinking Nitro? Good times, apparently.

This year, Nitro has sponsored several different student events. Nitro’s self-titled ‘Director of Fun’, Steve Shaw, would not confirm the number of student events they had sponsored. But students Critic spoke with confirmed that Nitro sponsored Agnew Street, Backpackers Ball, London Manor Ball, and McKellar Ball. Their sponsorship deals varied slightly, but the student party organisers all agreed that having Nitro on board was a fucking good idea.

Shaw said Nitro has “sponsored a few gigs around the country, but to be fair Dunners have probably put on the biggest events to date”. Shaw spoke highly of Dunedin students saying, “Nitro is all about a good party and, by the looks of it, the party seems to not only invite Nitro along but also show Nitro a good time. What a nice sociable crew you have in Dunners.” Students organising the events were “better to deal with than one would expect. So far everyone has been straight up, helpful and real professional in everything we do with them.”

When asked what concerns Nitro had about sponsoring student events he said “not many”. Mentioning “standard stuff about running a decent event and looking after their mates”.

Shaw wouldn’t give away any figures about Dunedin’s Nitro consumption compared to the rest of the country, admitting only that in terms of litres per capita, that we probably excel, “Probably something to do with all the hard studying they do and need to [have] a quiet Nitro or two”. His personal favourite Nitro flavour was "a toughy… do like Vengeance, but in saying that I do also drink a pile of all of them.”

McKellar Ball is an annual student event at the McKellar Mansion on Pitt Street. Hosted in July this year, there were 250 tickets sold at $30 a pop. Taylor*, an organiser Critic spoke to, confirmed there were around 300 people in attendance on the night, including ticket sales, band members, tenants and those who crashed or made fake wrist bands to get in.

According to Taylor, the previous year's tenants had given people a bottle of wine on entry, but this year they wished to do something more economical. They decided to contact Nitro, and within months had sorted themselves a deal. Taylor confirmed that Nitro sold the McKellar girls 280 bottles of Nitro for the ball for just over two grand, with a few extra boxes of Nitro thrown in as their order was so big. They also supplied them with a banner, free merch, and a “real average” red carpet which they “laid out anyway”.

When asked if they had any concerns about being sponsored by Nitro, Taylor said Steve made a passing comment that news of the sponsorship was likely to cause “a bit of an overreaction [...] I don't know if he meant that in a positive or negative light.” The students said that they didn’t know the legalities behind getting sponsorship from Nitro. They said they registered the ball with Good One and because it was so busy, were expecting a visit from Campus Watch or the police beforehand. “I didn't know if we were gonna have to hide the Nitro cos obviously we don’t have a liquor license or anything,” they said.

Taylor was full of praise for Steve, saying he was a “pleasure to deal with,” with a phone and email manner so casual that they were concerned they were being trolled. “We kinda were worried if he was legit or not just because he was so chill. Turned out he was legit, which was awesome.” Steve even asked her for business advice, pending sponsorship for Agnew Street. “We were in contact heaps beforehand confirming details over and over. He ended up ringing me asking about Agnew. He wanted to know what the deal with Agnew was; if it was a big party, if it was legit and if lots of people were going. I told him yeah, should be good.” Shaw wanted to know if she thought it was a good idea that Nitro sponsor Agnew, “I was like uh yeah… turns out I’m now his business advisor.”

Critic contacted the Agnew Street organisers who were hesitant to comment on their sponsorship after they were told not to talk to media as “it is private information between the event organisers and Nitro”. While any figures around Nitro’s sponsorship are unknown, Shaw described it as a “no-brainer” for Nitro to “get on board, support the gig and cover the costs”. Nitro supplied banners and, according to another organiser, “paid for the entertainment side of things”.

Alex* and Seth* from Backpackers Ball spoke of organising a sponsorship deal similar to that of McKellar, with around 250 tickets sold at $30 and roughly 300 Nitros supplied. Backpackers Ball is another established event. They put on DJs and bands, with a DIY bar installed in the upstairs floor. The boys said that they were also sponsored by Red Bull, who gave them a couple of hundred Red Bulls for free. They then went out and bought mixers and 30 bottles of vodka to have a stocked bar with bar staff on the night. Nitro gave them 310 bottles for $6.30 each. When I asked the boys whether they thought Nitro was something that they and their mates wanted to drink, they said no, “it definitely wouldn't be our drink of choice; it was more that we could get so many bottles for cheap.”

Alex and Seth found dealing with Nitro pretty easy. “We gave Nitro a buzz and said what we were looking for. I think they were just stoked to get their name out there.” They said Nitro was a good alternative to wine, as it’s easy to clean up with no glass bottles. “It’s an easy way to control who gets what at a ball if you are gonna supply some alcohol.”

While Backpackers Ball was undoubtedly a good time, it didn’t come without its fair share of trouble, with the night racking up a minimum $1500 dollars in fines. Backpackers is home to 19 boys with a maximum capacity of 50 people in the premises, as it is legally a commercial building. “Obviously we had like 5 times plus that,” they said.

When someone pushed the fire alarm at 9pm the boys decided to hide everyone in all the rooms at Backpackers. When the fire brigade came, the alarm went off again as everyone was smoking inside. “Noise control showed up and we had to pay $800 for that. Our decks also got taken. They were Gravity Events’ so we had to pay them for a late fee and then pay the $500 seizure fine.” The boys said that they did lose a lot of money. “We got a lot of fines. We never expected at a ball that you pay to go to, for someone to pull the alarm. In past parties, we taped one of those little red boxes to it. We didn’t do it this time. It does seem like someone must have done it on purpose.”

The boys said they didn’t register the event until the day of the ball, and they believe that the fire alarm going off set off the bells for all the other services. “By the time the fire brigade came, they all knew about the party. We didn’t even get done for the speakers until 2.30am. You could barely hear anything outside of the flat. The first time, we called 111 to tell them that it going off was an accident, but apparently ‘cos it’s a commercial property they have to come and turn it off.” They are being threatened with a minimum $1500 fine and maximum $200,000 courtesy of the DCC if it happens again. They blame their neighbor for the complaints. “That was our third noise fine and third seizure for the year. It’s basically from [their neighbor] every time, or we assume it is. She calls us young naive boys that don't care. We’ve tried to be nice, given her wine. Had security on the door for our events. She says wine and chocolate aren't going to cut it anymore.”

Despite the DCC’s threat of a $200,000 fine, the boys are fairly optimistic, saying, “we haven’t got a noise abatement yet. So that's a positive.”

Nitro’s director Steve wanted to thank the students of Dunedin for their support saying “Thanks Dunners, you’re a bloody great crowd of NITRO enthusiasts”.