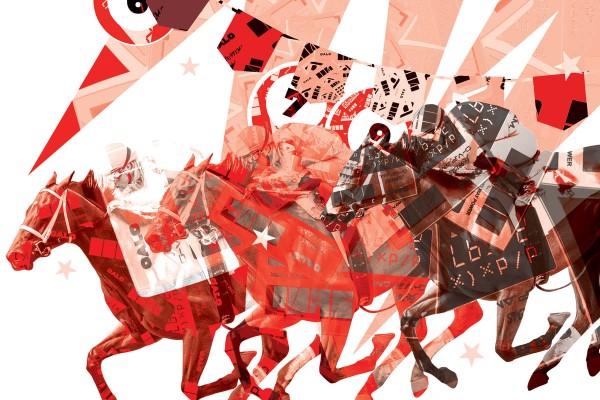 The students who make money gambling

Between 2017 and 2018, New Zealanders lost nearly 2.4 billion dollars on gambling between the TAB, NZ Lotteries Commission, casinos and gaming machines. This number has been increasing every year since 2010, with gambling estimated to affect one in five kiwis throughout their lives.

Being a student usually means a lack of responsibility for anyone but yourself, which makes it easy to spend your money pretty recklessly, whether on beer, vape juice or on the dogs at Baaa Bar. From the seemingly harmless Melbourne Cup races, a drunk punt on the pub pokies, or a cheeky Lotto ticket, gambling is ingrained into kiwi culture.

There hasn’t been much (if any) research conducted in New Zealand about gambling amongst tertiary students. Many students, particularly men, participate in some kind of recreational gambling on a weekly basis. Some even gamble their entire food budget for the week for the 50/50 chance of doubling it or losing it all, in a game called “Feast or Famine”.

Critic spoke with several students about their experiences with gambling. While losses and wins varied amongst those interviewed, none of the students felt they had a serious problem.

Chris* started sports betting with his mates when he was in year 13. Now in third year, Chris’ gambling is more regular. “It goes through phases where I’m betting maybe once a day, or maybe once a week.” Betting predominantly on football games, Chris prefers to bet on things he has a bit of knowledge about. “[It was a problem] when I branched off to horses for a little bit, compared to football where I had some sort of knowledge. With horses I’m only doing it for the potential returns.” The money goes quickly, Chris said. “I was losing a few races and had to ask myself why I am actually doing it.” He considers gambling a social activity, betting on sports games that he would watch with mates. “A lot of lads who watch sports at university would get into it. I would say it’s definitely part of the culture.” While Chris had only ever won $230 in one bet, “I know a guy who won $23k the other day on horses […] That’s probably the only big win story I have.” He added, “you never hear about the losses”.

20-year-old Tom* won big, to the tune of $12,800, on the dogs last year. He started gambling one particularly boring summer when he was 17. “Because you have to be 18, I made an account in my Dad’s name.” Tom gambled on the cricket and other miscellaneous stuff he was watching on TV. “I was gambling really sporadically. Sometimes not every day, sometimes several times in a day.”

Tom never felt like his gambling was out of control. He would only transfer $100 dollars from his account per bet, so that the maximum amount to lose would remain the same. “The most money I’ve ever bet on a single thing was $2500, but all I ended up actually paying for that was 100 dollars.”

When Tom won big, he put the majority of the money towards his rent for his flat and pretty much stopped gambling. “I just thought it was a pretty good time to stop.”

When he won the $12.8k, he was drinking with friends. “I was horsed as and literally put a bet on something three times in a row and won. It was very, very flukey. I definitely just got lucky. That’s why I knew I had to stop then - so I didn’t do something stupid with it.” Tom’s parents were “shocked and impressed. My dad asked me for tips, but I didn’t know what I was talking about.”

Tom believes the social aspect diminishes the stigma of gambling. “I’d say 90% of my mates have TAB accounts […] it adds interest to whatever we are watching.” He also agreed that gambling seemed predominantly a male pastime, although noted that a small number of girls at his hall of residence in first year would join in.

Tom has “never considered gambling a legitimate way of making an income,” calling it “just a bit of fun”. With the Rugby World Cup coming up, Tom said a promotion is likely going to get him interested in gambling again, as during the Cricket World Cup he was “gambling heaps”.

Fourth year Maths and Finance student, Matt*, uses gambling as a legitimate way to support himself - by developing a dog ranking system to increase his chances of winning.

“I can’t be stuffed working; Wellington rent is pretty pricey, I’ve got exams,” he said. “I started out getting a couple hundred a week and then it started getting kinda crazy like $500-$1000 a week.” Matt said that when he decides to invest more time in the bets, by employing more complex mathematical methods he can make $1000-$2000 weekly, although that takes a reasonable amount of his time and he admits “the inconsistencies are there”. On average, Matt spends $20 a week to make $200-300 dollars, which takes him four hours in total.

Matt’s background in Maths and Finance helped him draw parallels between the two. “When you talk about gambling, you talk about returns and stuff like that. I thought, ‘what's the difference between the financial market and the TAB?’ Finance is kinda just legitimised gambling sometimes, so I thought about what I could do with the dogs by applying some math and finance concepts.”

Matt decided to bet on dogs because it has the fewest amount of variables. “What I like about dogs as opposed to horses is that it’s just a dog running around a track, as opposed to horses, where you have jockeys and stuff; I didn’t want to look at too many different variables, otherwise the model isn’t going to work.”

Developing his system took several weeks, involving creating a formula to rank each dog’s likelihood of winning. His formula includes data from historical wins, dog career probabilities, box win percentages and even weather conditions. By scraping data from the TAB page with the help of a program, within two minutes he has the information he needs to bet on a race.

Matt doesn’t watch the dogs for entertainment, as he prefers to keep emotional distance from what he considers investments. “It’s like finance […] Based on what the market’s doing, you have to be confident in what your method is, otherwise you are just gambling.” He doesn’t believe his system to be gambling entirely. “I’m sort of gambling, but to a certain degree it’s educated guessing.” Matt maintains that his gambling is not a problem, nor does it have the potential to become one. “I’ve got low stakes, have removed the high risks, and am making bigger margins on my investments.”

Most students don’t seem to enjoy gambling at places like the TAB, pokies or casinos. Chris said that he’d “been to the TAB once to set up my account and I’ve never been to the casino. I went to the pokies at the back of a pub, spent $10, didn’t win anything and have never been back.”

Tom shares these sentiments. “I’ve only been to the physical TAB to get my money out. There’s a lot of people [there] who you just think, fuck, they definitely have a gambling problem.”

In the 20 years since the Dunedin Casino opened, it has had its license suspended once (in 2006) when the Gambling Commission discovered a woman was enabled to lose $6.6 million there over the course of three years. They were closed for two days, but it’s hard to understand how things like that go unnoticed for so long.

A student and former Dunedin Casino employee Michaela* said that students didn’t come to the casino very often. “If they do they're not spending a hell of a lot of money, at least not what our regulars are spending. If they are coming in it’s normally going to be a game of Feast or Famine.” She noted that students rarely won large amounts of money. “You only see regulars winning large amounts of money, and the casino isn't too fazed because they know the money is only going to go back in”.

Problem Gambling Foundation Services (PGFS) is a mental health and addiction service that provides counselling and support to New Zealanders affected by gambling. Marketing and Communications Director, Andree Froude, said it was difficult to say exactly what behaviours can be attributed to student gambling, but that young adults are more likely to participate in sports betting and/or online gambling. “Sometimes young people gamble because other family members do, or they are introduced to it by friends,” said Froude. While unfamiliar with “Feast or Famine”, she has heard many stories of similar games where students wager things of value.

Froude said that it’s important to recognise signs of harmful gambling so students can look out for their friends. “This includes borrowing money for gambling, lying about time or money spent on gambling, hiding bills or unpaid debts, spending a lot of time gambling, or thinking and planning to gamble. Someone may appear distracted, anxious or depressed too.”

PGFS say that for any student worried about their gambling, the best thing to do is seek help before it gets out of control.

PGFS in Dunedin offers free, professional and confidential counselling and support for anyone affected by gambling – this can be their own gambling, or the gambling of someone else.