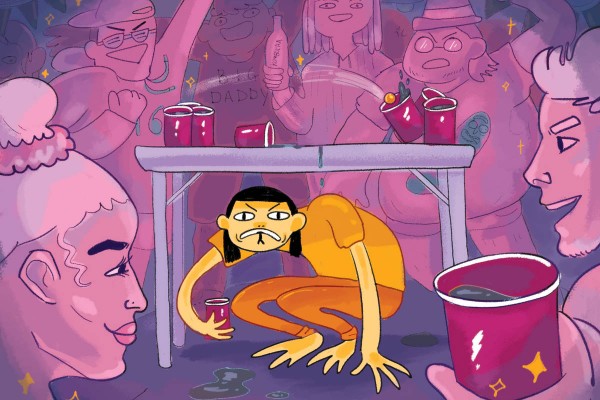 Who to Avoid At Parties, and How to Do It: A Critic Guide

I'm a lover of many things. I love staring out of windows, I love ducks, and I love Mitski. But one thing I really don’t like is having to socialise with people I barely know at parties where you can barely hear yourself talk over Darude’s Sandstorm.

So, I created my very own avoidance guide in order to help people who also dislike having fucking boring conversations with people who have less charisma than a half-eaten burrito.

The first step is identification, because there are roughly five different types of people you'll want to avoid at parties. I am incredibly popular and have been to many parties (at least three) so I know these people quite well.

1: The Faux-Spiritual White Person Who Has Probably Been To Bali One Time

This might seem like a niche, but for some reason they're fucking everywhere in this shithole of a city. You can spot them by the way they pair 'harem pants' with adidas sneakers. It's a bit like 'sneans' but with more white privilege thrown in. Some of them even have these weird growths on their heads that they call ‘dreads’. They're always talking about how they have an inner goddess, but the truth is it’s actually just a tapeworm they picked up on their travels.

This term is actually gender fluid and works well on anyone who is both basic, and a bitch. They’re easy to spot because they’re constantly talking about how different and unique they are. In reality they’re actually all just one hive-mind called Karen. If you’re reading this and thinking ‘I’ve never met basic bitches at a party’ then you ARE the basic bitch at the party. Kindly fuck off, Karen.

3: The Person Who Peaked In High School

These people are easily identifiable because they’re always wearing their fucking high school leavers’ hoodies. You can also find them wearing cargo shorts (it’s their way of showing off how dry their knees are). They also like to brag about the sports awards they received and how much their teachers liked them. This is just a defence mechanism that feeds into their denial of the fact that no one gives a damn about NCEA Level 2, and that high school is an embarrassingly early time to be peaking in one’s life.

4: The Person Who Cares Far Too Much About Politics

These people usually dress like Picasso and Ru Paul had a baby, and that baby was having a mental breakdown. Which is to say, far too much floral print and absolutely no colour coordination. They’re feral and will bite you if you get too close, or worse, ask you what you think about the OUSA election. I once almost lost an arm when I accidentally bumped into a Young Nat.

Now it's time for some fool-proof avoidance methods:

This one is a personal favourite of mine. It involves stealing the bluetooth speaker and taking it away so you can play your own music. To really go with the theme, you should listen to K-pop (or Grimes). If there’s a river or other source of water nearby then you can sit next to it and make strange movements. Don’t forget to hiss/growl at anyone that comes near you (it really adds to ‘fuck off and leave me alone’ vibes).

This one involves hiding under tables and making strange noises. Acceptable strange noises are “hnyeh-hnyeh”, “hurgghap” ,and “aiiskoodillyoop”. It’s pretty straightforward, is quite easy to do, and if you managed to hide under the food table then you’re never too far away from a snack. And if anyone tries to ‘cheer you up’ and drag you out from your hiding spot, you can just bite their fingers off.

This is pretty much exactly what the title suggests. If you don’t know what the title means than I guess that’s a you problem. Basically my version of operant conditioning involves spraying anyone who tries to talk to you with a little bottle of water, and for every ten minutes someone doesn’t talk to you, giving them a piece of candy.

Simple yet effective. Just don’t let yourself get caught in a boring conversation. For example, if someone starts talking, just say “I have never and will never see that show, now please don’t talk or look at me!” then just turn around and run in the opposite direction. Just be careful where you run to. One time I ran into a couple fucking in a hammock, it was horriffic; I saw some tits and now I’m straight.

Now go forth and avoid.