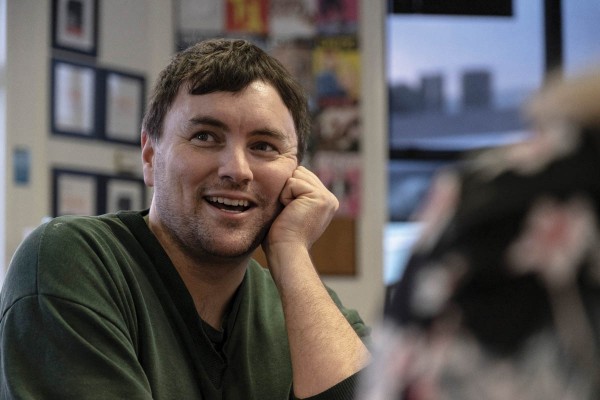 The Funny Bone of the Nation: A Chance Encounter With Comedian Tom Sainsbury

Unless you’ve been living in one of New Zealand’s proudest backwards communities (Gloriavale or Balclutha), you’ve probably enjoyed a good chortle courtesy of the country’s premier comedian du jour, Tom Sainsbury - Comedian and Snapchat Dude. Tom is an entertainment powerhouse. He recently scooped Grand National Best Director for his 48 Hour Film entry, Like Nobody’s Watching, which also won runner up Grand National Champion. Tom is a playwright, a Shortland Street star, and a standup comedian.

Tom’s characters are varied and yet strikingly familiar. We’ve all grown up with our mum’s friend Cath who worked for twenty years in the same retail job. Smoke from her Winfield Red would gracefully curl through her fingers as she’d suck down a drag, before starting her gossipy bullshit with a wheezy “Look. I probably shouldn’t be saying this, but …” And didn’t every single one of us at some time or other accidentally find ourselves in a short relationship with Jimbo the road worker, before realising that his presence was making us dumber by the second? If you’re too high-falutin’ to recognize these personalities, then you will at least have heard of Paula Bennett, whose parody of made Tom a raging success online.

Upon seeing “Duncan from Dunedin” (legit every fucking student slumlord/landlord ever) discussing Baldwin Street while FILMING ON LOCATION, I nearly wept with joy. Tom Sainsbury, here, in our very own Shit Town of New Zealand™. Naturally, I did what any crazed stalker would do and drunkenly slid into his DMs at 2.35am, using my “job” as an excuse to ask him to hang out. I woke up to find that he had promptly replied at 8.16am, available to meet that very day. This was possibly the biggest day of my “journalism” career so far.

At 5pm, like a slinky, incredible cat, Tom arrived in the doorway of Critic. Although I was dying to hug him and perhaps soak up some of his magic, I shook his hand because I’m an awkward human equivalent of a wet dressing gown sleeve. We made him do weird things like posing for photos, which he graciously did, and then we sat down to live, laugh and love, like totally normal people.

Although Tom is a kind, seemingly sweet person, he will never hold back on his satire of politicians. “I think everyone should be fair game,” he told me, before admitting that he would ditch Snapchat and Facebook forever to be Prime Minister rather than be granted three wishes but have chainsaws for hands. “I’d love to be Prime Minister,” he confided (with actually a little bit of a secret gleam in his eye).

Tom is already well on his way to becoming PM, after his character Fiona (rich as fuck, speaks with St. Cuthbert’s dialect and loves a good wine) got a bit munted on the “bubbles” one night and decided to run for Auckland Mayor. I looked it up, and Tom Sainsbury is indeed listed as an independent runner. “I’m gonna be campaigning as hard as I can, so I’m technically Fiona’s campaign manager [...] But people are inviting me to all these events to meet the candidates and I’m like, oh my god I’ve got so much work to do.”

Enough of this politics talk. I wanted to know the real Tom. I wanted the cold hard facts, and informed him that he was going to have to answer the following shoot/shag/marry from the following characters of his: Cath from the pharmacy, Gladys, or FitBit Darren.

He looked quite delighted at this prospect. “I have to shoot Cath because I find her the most annoying. Oh god. It’s a tough one.” He paused, thinking very seriously for a minute. “Fitbit Darren - shag. “I know this is crazy, but marry Gladys. Out of all of them, she’d stink so badly but I would choose her because I think she’d be the most fun.”

Has he been asked to roleplay any of his characters in bed? “Yep. I have. I haven’t done it, but I’ve been asked [to be] Paula [Bennett]. There was just this stage when I was on the dating scene a couple of years ago, and it’d just be stoners, all these stoner guys would be messaging me, like that’s my target audience - middle aged mums, and stoner guys.”

If he had to become one of his characters for an entire year, Tom would choose to become “this gay guy who worked at Just Jeans and he was very full of himself”. Almost wistfully, he added, “I feel like he would have a good life. He’s not too inward-looking, so if I could be that kind of non inward-looking, I reckon it would be fun to be him for a while.”

Now we were onto the real reason I asked Tom to visit. Fixing him with a steely gaze, I asked in a hushed tone, “Have you ever seen a UFO?” Tom’s answer is going to be given as a full quote.

“No. But. So many people I know have, and I can’t imagine them making it up. I’m a real skeptic. And the people I’m living with at the moment, there’s apparently a hotspot for it between here and Invercargill, and they were driving along, and then the car just turned off so they kind of pulled off to the side of the road. It was pitch black and they didn’t know if they could keep driving, and they tried it again and it came back on. But there was a red light following them. If you’re into UFOs, I’m sure there is a place here that everyone knows about. It’s great. I’ll find out where the strip is and I’ll send it to you.” Tom if you’re reading this, I’m still eagerly waiting for this location.

Tom is also into conspiracies and mysteries. See, celebrities are just like us! We could even be best friends, if he would move to Dunedin and flat with me (haha, just kidding … Unless?) I halfheartedly apologised for asking about UFOs and conspiracies instead of career-related stuff, even though I wasn’t sorry at all.

“No - this is so much better. I spend so much time online, on pages like Unsolved Mysteries and things. Like Jack the Ripper I just spent YEARS on him and it’s so depressing that we’ll never know.”

“I’m not doing it so much now, but you go down wormholes of unexplained things on camera, so they just have YouTube montages of strange people in the distance just hovering and things like that.” I played footage of Barack Obama’s reptilian bodyguards for him, which he audibly gasped at. “Oh my god. WHAT!!! That’s crazy. I love it.”

He left shortly after, presumably to go look up more government reptilian footage on YouTube. On the way out, he initiated a hug, erasing my earlier awkwardness. We were mates now; hugs were expected. I remained there for some time, basking in the glow of having just had a chat with the funniest person in New Zealand.