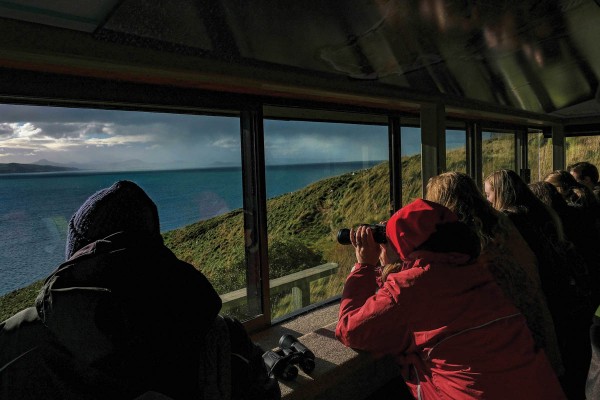 Close Encounters of the Bird Kind

When Critic gets invited somewhere with the promise of free food and VIP treatment, it’s fuckin’ on. We gleefully headed out to the Otago Peninsula to see some albatross on a drizzly Saturday, which turned out to be a truly magical day of colonialism, petty theft, and cool bird facts.

The journey began with a dramatic reading of an old Scottish poem by Robbie Burns, in the booming voice of our van driver and tour guide. We began to feel like tourists seeing Dunedin with fresh eyes and a renewed interest in gingerbread architecture. Rolling across scenic hills to the Peninsula was genuinely, wholesomely, lovely. And we weren’t even on heroin (yet). But around the twenty-minute mark there were a few too many sharp turns, the van windows fogged up, and the albatross insignia on the windows blocked our remaining meagre view out the van. As we careened around the corners and our tour guide continued to recite details of the Peninsula’s rich history, the carsickness hit hard. History is not a good cure for nausea.

Upon arrival, after a moment of recovery and rejoicing solid ground, we hurried out of the rain and into the visitor's centre. Eight (maybe?) writers looking out of place in a wildlife sanctuary did nothing for the ambience. Dominated by a huge gift store sporting the usual array of Merino garb, stuffed animals, and obscure magnets, the rest of the main entrance took the backseat. Even the stuffed albatross hanging from the ceiling couldn’t distract from the unfortunate touristy element. Is it their main source of profit? Technically, yes. But that is no excuse for poor taste. Except for the excellent squid lamps hanging from the ceiling. And the squid stained-glass windows. Actually, what am I talking about, the place was rad.

We all shuffled into a small movie theatre room for a tour introduction, and the two rows of seats made it a very intimate experience. The tour guide explained how terrifyingly large albatross are: 3.5 metres, i.e. two average-sized people stacked on top of one another. They all look so peaceful and serene in the postcards, but you would not want a huge fucking bird closer than necessary. Though graceful in flight, they are terrible at landing and even worse when walking. It’s nice to be able to relate to the animal kingdom.

We migrated (like the albatross) out into the blustery peninsula air, stopping by the old jail for a quick history lesson. When Dunedin was convinced they were going to be invaded by Russian submarines, a barrack and various gun towers were made where the albatrosses nest today. We were going to go into the gun house but it was “just painted” and they “didn’t want anyone to asphyxiate” (sounds more like they were trying to hide something, tbh). Being that we at Critic are all into consensual choking, we were pretty disappointed but continued onwards. Once inside the viewing building, it was toasty warm and we were ready to stalk some winged creatures.

The baby albatross were tucked up in hollows along the cliffside to stay cosy. A couple of them were doing something scientists call “the flappy flap attempt” – when young albatrosses stand up and stretch out their wings and hop around to start learning how to fly. Only two of the six or so babies were doing this, who we will affectionately call the “jocks”, whereas the others were perfectly content staying curled up and comfortable (the “nerds”). We didn’t see any adult albatross in all their ridiculously large glory, but there was much excitement about the shag colony on the rocks below building dirt and grass nests. Find you a man like that.

As time passed, whispers among us of albatross burglary gained momentum; simply because the longer you looked at the fluffy babies, the more intense the desire to take one home became. We were a group of small children and the albatross babies were the toys your mum wouldn’t buy you. They looked like the perfect size for a good snuggle with all those fluffy feathers. We refrained from stealing, for now. (Or did we?) On our walk back to the warm respite of the main building, we met some sheep, which we also considered stealing. We definitely did not return at midnight with balaclavas and a getaway car (the OUSA van) and commit some light sheep rustling. Nope. Wouldn’t dream of it.

There were a good few hours between the albatross tour and the penguin tour. The time stretched out in front of us like an albatross wingspan. Half the group stayed in the warm and had a hearty snack, while the other half decided it was time for an adventure. We piled into a car and drove five minutes down the road to a series of tunnels and gun emplacements built in the hills from the Russian scare days. Our beloved editor, Charlie, having extensive knowledge of random places where raves are occasionally held, lead the way. Exploring muddy, spooky and abandoned caves was a perfect intermission.

Finally, it was penguin time. This was the most exciting part of the trip. We headed down, nabbed our spots, and waited. Waiting for the penguins to arrive is a strange experience. You eagerly watch the waves, staring out into the freezing wind and checking regularly to make sure your nose hasn’t fallen off. Suddenly, an adorable platoon of penguins charged the shore, hopping their way over a group of rocks and scrambling up the penguin highway. You’re only a few feet away, but the penguins don’t give a guano. They go about their business as if there aren’t a bunch of overexcited Critic reporters pointing at them and snapping pics. Then they dart into their homes, and it’s over.

After a long day of birds and banter, we were all happy to head home, having learnt an important lesson: it’s not about the friends you’re with, but rather the albatross you steal meet along the way.