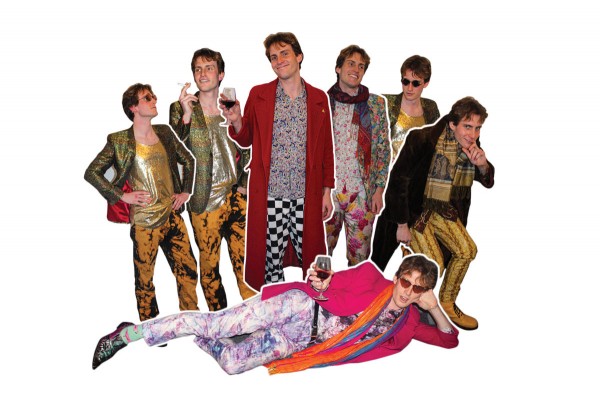 A look inside the wardrobe of ACT’s funkiest MP

Even if you haven’t heard of Sam Purchas, chances are you’ve seen him. When he’s not running unsuccessful campaigns for ACT MP of Dunedin North, he’s strutting around university in bright floral suits, polyester red coats, and paisley shirts. In a town full of Huffer surf tees and distressed Glassons jeans (which I’m not mad about; it’s better than the whole puffer jacket and striped shirt debacle of 2016), Sam stands out. I’ll take this moment to liken him to one of my favourite childhood literary figures, The Rainbow Fish. The man just about fucking sparkles with individuality; Edward Cullen can suck my cock. Critic sat down with the legend himself to discuss fashion, fashion and more fashion.

Sam wasn’t always the fashion icon he is today. In year 9 he wore “the most heinous clothes, like cheap $10 Warehouse t-shirts all covered in rips with these elasticised net cargo pants. Those cargo pants were my formal pants - if it was informal I’d be wearing board shorts.” Hot. But like most men I know, everything changed after a deeply formative experience: watching Fight Club. Yeah, I know. After watching Brad Pitt rock that badass red leather jacket, Sam was transfixed. For his birthday, his mum bought him the jacket, and from then on he “couldn’t continue to pair it with such amateurish leg wear”.

So, like all good coming-of-age stories, the cargo pants had to go. Sam started frequenting the Lower Hutt Mall and never looked back. “Initially there was a lot of plaid button up shirts, then I gradually progressed into paisley and subtle floral prints and then scarves came and then the jackets came.” Much like a burgeoning smack addict, soon he wanted more. “Each year it just gets more and more lavish. I’ve never been satisfied with how ridiculous my outfits were. In year 13 if I had seen what I’m wearing now, I would have been absolutely fucking mortified.”

Hence we have the Sam Purchas we know and (kind of) love today. Inspired by Queen and David Bowie, Sam is not here to fuck spiders. When asked where he finds his bounty of clothes, he revealed that he’s “a massive tight ass, so I’m a slut for a good discount, and I tend to just shop in sales. For pants, ASOS are the best, but for jackets and scarves, then op shops are where it’s at.”

Sam loves the fashion trend of rompers, sheer tops on men and animal print, though describes his mood board for 2019 as focusing on sunglasses and patterned pants. My mood board is grey hoodies and dry shampoo. I didn’t even know you could wear sunglasses in Dunedin. Walking through campus, Sam admits he gets the odd stare, but doesn’t mind, as “it appeases my pathological need for attention”.

On a first date he tends to go all out and wear something “ridiculous”. “It’s better to warn people early, I’d rather make a bad first impression and then crawl back up rather than make a good first impression and then be a perpetual disappointment from then onwards. I’ve got a real problem with leaving my fly open, so that’s probably a good first date look.” After knowing Sam for three years, I would like to state for the record that he never redeems himself from that bad first impression. He’s since started vaping and now drives a red sports car, so he’s actually gotten infinitely worse. I’m also not convinced that the advice to dress ridiculous is limited to first dates though, since Sam also wore a floral shirt and floral bowtie to his granddad’s funeral.

When asked if he thinks his flamboyant clothes have prevented him from putting work into his personality, Sam laughs. “No, no, I think the clothes are a result of me accepting that I have very little to offer in the personality department anyway.” That hasn’t stopped Sam being approached romantically though (people use his clothes as a conversation opener), although he’s sure his clothes have deterred an equal amount. Growing up a “shy kid,” Sam feels more confident when he’s at his fashionista best, which certainly helps him chat up the masses. Oh and he’s also like 6 foot 7 or something, so that probably helps.

To Sam Purchas, fashion means “fun, I just like to have fun with my clothes and I think most people should as well. You shouldn’t feel the need to buy expensive label clothing that’s super dull.” People can find fun through fashion in whatever way they feel comfortable with, even if you’re just a boring law student wearing bright socks to seem interesting (Sam thinks sock expression is a bit “amateur hour” but appreciates that most people don’t want to wear a floral blazer). He ultimately just wants people to express themselves and feel comfortable in doing so.

At this point of the interview I was concerned we had found ourselves in the middle of a feel-good Glee episode, but then remembered that Glee is also a wonderful show so I wasn’t too concerned. After a bit of pushing, Sam says he’s happy to give fashion advice to people, and his going rate as a personal shopper is $20 an hour. That’s cheaper than the rate your mum pays your friends to hang out with you. Consider his offer.

Overall, this isn’t the last evolution of Sam Purchas we’ll see (so there’s still a chance for a steampunk phase). He’s sure his style will change again, like it does every year: “I’m part of the ACT party, we all love a good rebrand.”