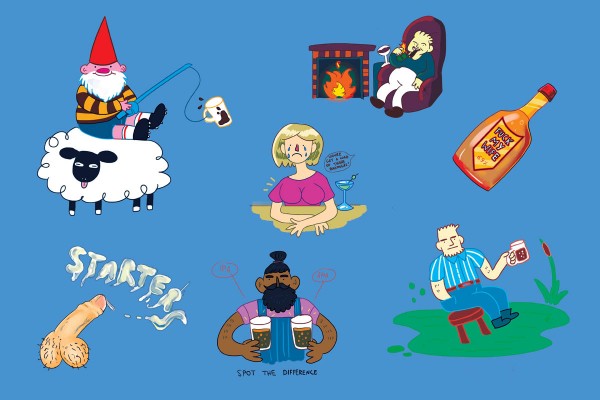 My loves, I am writing this to you from a pit of deep despair: my bathroom floor. I’ve been here for what feels like hours. It’s the early morning and I can see the sun rise if I position my head at a three quarter angle over the toilet bowl. It’s a beautiful day. I wrench the last of my stomach contents down the drain. How did I end up in this precarious position? No, I’m not pregnant, shockingly, no matter what the scales say. Instead, I’m suffering the aftermath of the Great Critic Pub Crawl.

If you’re sick of queuing at Leith Liquor on a Monday night just to lug some bottles home to drink in your freezing cold flat, consider going to a bar. Yeah, it’s expensive, but so is buying lunch everyday at Uni because you’re depressed and it’s yet another “treat day”. Read on, my birds.

I started here first because, like all my firsts, it’s pretty fucking terrible. Honestly, what do you expect from a place that calls itself a “sports cafe”. If it’s not Steve Hansen in booty shorts drinking a flat white, I’m not interested. The atmosphere is what I imagine the inside of my dad’s armchair looks like. I’ll give it this though; it’s cheap. If you’re looking for a few rounds with the boys, and coincidentally also dislike showering, then look no further. The Baaa Bar has a lot of faults, but I think its most unforgivable crime is its former association with Selwyn College. A few years ago, they used to offer discounted drinks to stubby gnome children, and although have since discontinued the practice, still the rugby-wearing youths turn up in droves. There are more sweaty freshers here than in my ex-boyfriend's bed, which is really saying something.

Fun drinking game: Take a shot every time you hear someone bitch about their legal opinion.

Zanzibar is a fun gin joint located on the main drag to town. If you don’t like gin, you might struggle here, so I recommend using it as a pit stop for some free water and a piss break. Things can get a bit pricey, but you can get some good solid G & Ts for a tenner if you want to let your hair extensions down and really go wild. The bartenders are huge flirts. Not to me, obviously, but to my hot friend with tits. Like seriously, we got propositioned to go “spray paint some flowers on traffic lights to spread some joy” after hours. I wanted to puke, and it wasn’t just because of the badly mixed drinks.

Ah me lads and lasses, where do I start? The Craic is an establishment, a beautiful small Irish pub in the centre of the Octagon. I’d heard rumours it’s run by the Mongrel Mob, so naturally I wanted to show my support for the organisation that’s been guarding mosques, feeding school children and eliminating Nazi symbolism. Sadly, the Craic was full of suit-wearing cucks, but I downed a few pints in support of the boys regardless. There’s a warm, crackling fire that almost makes you forget the woes of flatting life. If you choose to brave the cold, then consider sitting outside since the city centre at night; it’s almost beautiful, if you squint a bit. Overall, the location and atmosphere are probably some of the nicest of any of the pubs - that’s sweet gang money for you.

The Bog is the mean, older brother of the Craic. The one with sleeve tattoos and several cigarette burns. It’s bigger, with a much whispered about "upstairs", and hosts a whole range of patrons. The seating arrangement isn’t ideal; either you’ve got your ass hanging off bar seats or you’re squatting a fat one on a stool straight from the set of Snow White. It’s not comfortable, but neither is drinking several pints of cold, bubbly liquid. Avoid coming here for open mic night unless you like the sound of amateur guitarists yelling at you through a speaker system. The Bog isn’t a classy joint, but it’s a substantial step up from your standard sports cafe, with some nice traditional woodwork. Oh, but you know what’s fucked up? The Bog is a chain. There’s one in Christchurch, and there used to be one in Auckland. I’ve never felt more hurt in my entire life. Is nothing sacred anymore? Must everything I love be plundered for capitalism’s sweet profit margin?

Fun drinking game: Purchase a Guinness and pour in some contraband vodka to celebrate the end of the potato famine. Bonus points if your English friend fucks you in the ass later that evening.

Finally, a Scottish bar in this godforsaken city. My ancestors would be proud. Praise be. Albar is mid-range luxury at its best, with affordable whiskey and some crap about “craft” beer. I don’t want my beer to be creative; I just want it to be alcohol. The whole bar really makes you feel like you’re inside an Airstream, which is basically just a gentrified caravan. There are really only booths to sit at, which means seating is limited. But, if you do score a booth, they’re super romantic, and the leather material means it’s easy to clean any bodily fluids off. Black isn’t the most discreet colour, but a man hasn’t made me orgasm since 2012 so I’m not concerned.

Fun drinking game: Take a drink every time someone older than 30 walks through the door.

This place is crowded and overpriced but what isn’t these days? It’s a nice slice of Dunedin history, plus not too much of a walk from the student slum quarter. As a booze reviewer, I always enjoy getting mansplained to about ~ beer ~ and being informed of what a special shiny snowflake you are for knowing the difference between an IPA and an APA. Yes, the beer here is good, but paying $12.50 for a pint might literally be a bigger crime than the English winning the cricket. The only thing worth getting is a tasty tray; with a box of 6 beers setting you back $17. That’s $2.83 per beer (and believe me, the size of each tasting is more than generous). You get to try some different types of beer and flavours and all that jazz, which is good fun for playing my favourite game of: which beer is the most shit?

There’s an age-old dilemma about price vs aesthetic. If the Baaa Bar is a cheap fuck, then Pequeño is an expensive hooker with a taste for the finer things in life. It’s a little jazz dive bar (yeah I hate myself too dw) with an open fire and some thankfully dim lighting to hide how wasted I was at this point. This is a great date spot, if anyone (ANYONE) wants to get the hint. I spent all my StudyLink here. Drinks go for about $20 a pop, but they’re delicious and sexy and who could say no? Probably most people. Probably most goddamn people. The true downside though, apart from the fact that I now have to break the news to my children that Santa isn’t going to come this year, is the lack of substantial bar food. Want some hot chips or wedges to get you through the bitter night? Shit my bad, they only offer antipasto platters and Cuban cigars. That’s what you get for going to an upmarket lounge bar, you fucking idiot.

Fun drinking game: Drink a whole bottle of $6 wine in the bathroom because you’re too poor to afford shots here.

Here at Critic we deeply support and cherish any OUSA initiative (lol), which is why I couldn’t wait to get my little reptilian hands on this iconic bar. If you’re a few drinks down the toilet, Starters bar looks exactly like the ol’ Captain Cook, which is simultaneously heart warming and depressing. I guess this is 2019 student life now huh. At least the food quality has increased exponentially. $2 chips is a bargain y’all. Starters Bar may no longer be the slum-house-power-house that it was - God she was a dirty little girl - but idk it’s probably gotten safer and more organised? Fear not though, the floor is still a huge sticky cumshot mess. I could barely lift my feet, but thankfully the shit house music isn’t tempting enough to dance to anyway. There’s a reason Starters is called Starters. Find your end game, baby.

Fun drinking game: Spill your drink on surfaces and suck it up. No one will notice.