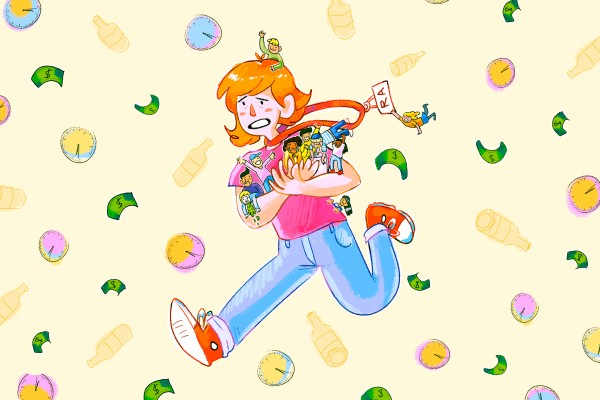 Nightmare Lives of RAs 2: The Revenge

Compared to other kiwi universities, Otago's RAs are still in struggle town.

*Zoe is a Residential Assistants (RA) at a hall of residence owned by the University of Otago. This year, Zoe works at an hourly rate of $17.70, which is minimum wage, for 34 hours a fortnight. Her take-home pay per fortnight is $564, while her hall of residence rent is $690, leaving her with a shortfall of $126 across the two weeks. “We are having to borrow to live,” she said. “I’m still borrowing the same amounts in living costs as I was for flatting.”

Last year, Critic published a story about Otago University RAs. That story highlighted how RAs often work overtime with no financial compensation, how they are undertrained for huge resident issues (such as suicide and depression), and how underpaid they are for what is such an important job in the pastoral care of the University. With RAs’ pay not covering their accommodation costs, the University is essentially making them pay to do their jobs.

However, in all of this, we missed out one really important part of the puzzle: That Otago is the only New Zealand University that Critic approached whose RA pay does not fully cover accommodation.

Critic approached Lincoln, Auckland, Canterbury (College House), Victoria, and Waikato. All of them confirmed that, whether through pay or discounted rent, their RAs can fully cover their accommodation costs.

What RAs do is wholly significant to the first-year experience, and they should be compensated as such. *Rachel, another Otago RA, called this difference “disappointing” and said she covered the deficit with StudyLink living costs.

Critic asked the Uni how they could justify this radical pay disparity. A University spokesperson gave two reasons for the difference. Firstly, “Otago has a significantly higher ratio of student staff to residents than other institutions.” That sounds legit right? The more people you hire, the less you can afford to pay them, surely? Turns out Otago has a tendency for over exaggeration. Take for example Te Puni Village in Wellington compared with Cumberland College in Dunedin. Both hire 12 RAs. Te Puni has an overall population of 398 residents, while Cumby houses 327. Doing the maths, Te Puni has one RA for every 33 people, and Cumberland has an RA for every 27.25 (tag yourself, I’m the 0.25 of a person). Is this a ‘significantly higher’ ratio? Nope. Is it enough to justify the underpay of hundreds of your employees?

The second reason the spokesperson gave for the disparity was that the University is “not aware of the terms and conditions at other institutions, nor what tax advice they operate under, so are unable to speculate on the difference”. Saying you didn’t know about something isn’t a great excuse for doing the damn thing. But also, I call horse shit, if that’s a thing I’m legally allowed to do. Otago is saying that they’ve never checked out the competition? Never even bothered to run a quick Google search on what kind of salary their biggest competitor, Auckland, is flogging to the masses? Cool. If it’s true and they were uninformed, it’s kind of sad that one of our biggest education hive minds couldn’t do what I, the swampy third-year student, did in ten minutes.

At this point, I should tell you that the University is changing their pay rates in 2020. From next year, RAs will be paid $20.55 per hour for 38 hours a fortnight, enough to cover their full accommodation costs. You’re probably thinking “great, they’re doing something, can I skip to the Blind Date already?” Not so fast, handsome reader. Yes, it’s great that Otago is changing their pay rate, it’s really fucking good news. A couple of issues still stand though, despite this change.

Firstly, while $20.55 per hour is a substantial step up from $17.70, it’s still not as good as it could be. Rainsforth Dix, Director of Student and Campus Living at Victoria University of Wellington, said that they pay their RAs $26-$28 per hour, as well as offering a discounted rental rate. Now that’s more like it. Otago, take note. Especially of that incredible name.

Secondly, it’s sad that Otago seems to only respond to pressure to change, rather than out of any moral code they hold themselves to. When we reported on RA problems last year, it became a Thing. The ODT even started reporting on RAs, so that’s how you know we hit the big leagues. OUSA held a referendum in May 2018, where a whopping 85% of students said they’d support OUSA lobbying the university for discounted rent for RAs.

The University shouldn’t just do good things because a bunch of teenagers told them to. As employers, they should care about employee welfare enough to want to give them a living wage, not just wait until their hands are forced.

Zoe said “within the colleges individually, a lot of staff members have been pushing for an increase in pay and an increase in appreciation, because the people working in the colleges see the work we do. They see the value that we provide and they know that they couldn’t do their job without us. It's the higher ups at the University that set the pay-rate and the hours, that don’t see us working, that don’t have an appreciation for the work that we do.”

For years, Otago has continued to burden RAs with a monetary deficit, while other universities have shouldered this cost themselves rather than push it onto a 20-year-old with student loans and no assets.

Thirdly, the pay increase by itself wouldn’t be enough to cover full accommodation costs. Instead, the University of Otago is also increasing hours from 17 hours to 19 hours a week. Remember that RAs are also juggling full-time study on top of this workload. Auckland RAs only work for 15 hours per week, yet their accommodation is still fully covered. 19 hours a week is a lot, especially for students who still need to sleep, eat, study and maintain their own mental health. That four hour weekly deficit between Auckland and Otago may not seem like much, but it quickly adds up. The fact remains that Otago RAs are having to work more hours in order to have the same benefits as other universities. But hang on, Otago stated before that “Otago has a significantly higher ratio of student staff to residents than other institutions”. So, if there’s more student staff hired than somewhere like Auckland, for example, why is it that Otago RAs are working longer hours? Something smells fishy, and it’s not just the dark corners at U-Bar.

Finally, the new pay policy by Otago isn’t perfect for all RAs. Currently, there’s a sliding pay scale for RAs depending on your experience, with new RAs earning $17.70, returning RAs earning $18.70 and Senior RAs earning $20. With this new pay increase, all RAs are set to earn $20.55, which is great if you’re a newbie, but not so great for long-time RA staff, where you’re only earning $0.55 more. Zoe points out that “Senior RAs are going to be paid the same as beginner RAs, but they have a lot more responsibility, […] more stress.” The University already has enough trouble with recruiting and retaining RAs, so it’s a shame that they’re no longer rewarding those that choose to stay longer than one year in the job.

Overall, I don’t want to discourage people from being RAs. It can be a really rewarding experience, and you can make friends for life. For Rachel, “being an RA has been one of the most amazing parts of my student experience and I would highly recommend it to anyone considering it”. However, this doesn’t make it right for the University to underpay its employees.

The University has made a lot of good changes since last year's article, such as increasing training and employing full-time Assistant Resident Tutors into lots of colleges to provide more specialised support for the community and student staff. It's good to see that Otago is making further changes, but it’s clear they can do more. Otago often talks a big game about competing with other major universities such as Auckland and Victoria - maybe it’s time they put their money where their mouth is.

*All the names of the RAs in this article have been changed due to strict contracts forbidding RAs to speak to the media lol.