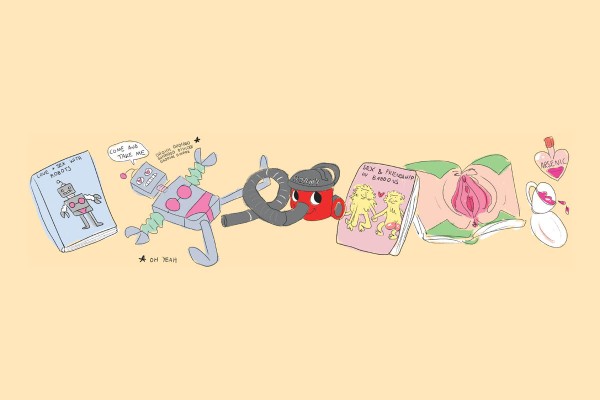 In search of the sexiest books in the Science Library

My journey into the most sexually tense space on campus (the Science Library) begins with a catalogue search. Peering self-consciously around me, I wait until the coast was clear before typing “sex” into the library search computer on the third floor and then I dive into the Library of Congress classification system to find the sexiest books in this repressed library.

“I do not foresee the future, with robots as our partners, as totally without its problems.” That single sentence gives you an idea of how seriously David Levy is taking his book’s topic. Love + Sex With Robots is about imagining a future in which we are all fucking – even marrying – robots. It’s Westworld, basically. But without horses or saloons.

It also says a lot of depressing things about humanity. If Levy is right, then not only are robots going to replace other people, they’re going to be better than other people. Better husbands, wives, politicians, surgeons, lawyers, and lovers. And robot sex is inevitably going to become a popular human activity.

But is this book sexy? Nothing with the line “[a]nd once the sexbot wagon starts rolling, nothing will stop it” could be sexy. This book is ominous. Please save us from the sexbot wagon. Please don’t fuck robots.

Sex and Friendship in Baboons

Nudity is a book about naked people. So, surely it is vaguely sexual? Nope. Not to make a sweeping generalisation, but no book that quotes Foucault and includes photos of nudist colonies has ever been sexy.

There’s a lot of information about sex and I am quickly learning that facts about sex are the opposite of sexy. For example, the book tells me that in 1971, a study of university students found that 80% of women believed their pubic hair was “a powerful weapon in their sexual armoury”. Sexual armoury is possibly the worst term I’ve ever read. Armoury is when acid mine drainage fucks with limestone. That’s not sexy.

The Exultant Ark: A Pictorial Tour of Animal Pleasure

This book is about animals being happy. It’s the best book in this cursed library. The photo of monkeys grooming a wild dog on page 77 made my heart melt. And now I’m going to ruin it for myself by reading the chapter about sex.

On the first page of Bonk, a hype quote (from A. J. Jacobs, author of The Year of Living Biblically, which seems like a bad sign for his sex life) asserts that this book is “if not better than the act itself – then a hilarious and entertaining alternative”. That is a big call to make, A. J. Jacobs. And it is disappointingly inaccurate.

Is Arsenic an Aphrodisiac?

Apparently, arsenic has historically been used as an aphrodisiac. Sexy? If you want to risk arsenic poisoning, it could be. (Do not try this at home.)

Assume Nothing is a photo book about gender fluid, transgender, and intersex people. I don’t know why it’s in the Science Library, but I appreciate it. It is a relief from baboons and robots and other reflections on science. There are some beautiful and sad stories. I enjoyed reading about the journeys of the subjects of Swan’s book.

Are books about the transgression of the gender binary sexy? I don’t know. This book is sexually empowering, and it contains nudity. The energy is like “go out and be who you are, wear whatever you want, and fuck whoever you want”. It’s definitely getting close.

The Male Ideal documents the photography of Lon of New York, who took nude photos of male bodybuilders between the 1930s and 1960s. Which, if you share my aesthetic sensibilities, is the time in which male body builders were just insanely good-looking men and didn’t have too much muscle. What I’m trying to say here is that they look like Greek gods. If we wanted men to internalise insanely unrealistic beauty standards, they would be forced to aspire to the men in this book.

This is a book of insanely attractive men, photographed in tasteful black and white. Too much body oil and too many flaccid dicks, but you can kind of ignore it. Is it sexy? Yeah.

Nothing But The Girl