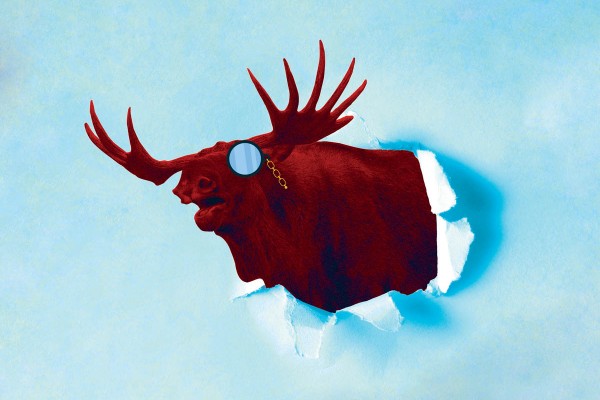 Dunedin. It seems that there is always some kind of local lore or big claim being made about this humble little city, usually by wheezing older men at the pub, or by drunk postgrads who believe that four years of living here has made them sheriffs of this here town. Sick of blindly believing the hype, Critic investigated some of these "tall tales" for ourselves. Behold the sickeningly fake news about Dunedin that you've been led to believe is true this whole time.

One of Dunedin’s main tourist attractions, the Dunedin Train Station is well known for its gingerbread-like appearance, bringing hordes of tourists into the city centre who quickly get bored and leave again, buying a stuffed kiwi in a kilt on the way. Woo capitalism! You’ve probably heard someone very proudly say that the train station is “the most geotagged building in the Southern Hemisphere”. Critic’s bullshit sensor dings. What about that giant Jesus in Rio, Brazil? Or Machu Picchu? Or the Gore Giant Trout? Well, those alarm bells proved right, and after some (very minor) digging, Critic discovered that the Sydney Opera House is, in fact, the most photographed building in the Southern Hemisphere. The train station is just a lame old building without any hemisphere titles. So shut the fuck up about it forever.

Baldwin Street is the steepest street in the world

The Fiordland Moose still terrorise the mean forests to the west

The mystical Fiordland Moose is a creature that everyone’s friend’s uncle's cousin's grandfather has definitely seen. The moose are said to be descendants of North American Moose released into the Fiordland region in 1910 that still roam the hills (moose is the plural of moose, before this gets confusing. We considered using ‘meese’ but decided that would be too whimsical for this hard-hitting article). Moose hunters have passionately dedicated their lives to searching Dusky Sound and various supposed moose habitats for proof of the elusive creatures. This “myth” does get a little iffy because technically there were moose in Fiordland brought over in yet another good-intentioned-ultimate-failure animal introduction (see also: possums, cats, Europeans). The moose (14 in total) survived in the wild for over 40 years, with the last proven sighting being a photograph taken by Fred Stewardson in 1953. So, there definitely WERE moose, the question here is are there STILL moose? No idea. Pretty unlikely. Sorry moose hunters.

Otago is the oldest university in New Zealand

I don't know if anyone has been informed of this yet, but this year is the University's 150th anniversary. And you can most definitely buy strange merchandise to remind you of that fact (just see the good folk at the Weird 150th Merchandise Store, next to the ID office). Everyone loves obscure parades and expensive books full of black and white pictures of dead people and old buildings that weren’t old when the picture was taken. But what if it was all a lie? Critic has heard that there may be an older University, hidden under the sea by Stewart Island. Rumoured to have opened in 1868 (a whole year before Otago’s opening), the school was on a rocky outcropping, focusing primarily on accounting. And then, in mysterious circumstances, the University of Stewart Island sunk below the waves overnight, leaving nothing but a lonely abacus as proof it ever existed.

When the Leviathan Railway Temperance Hotel opened in 1884 it was the largest hotel in Australasia, sporting 150 rooms, and management probably knew a guy who could get you some opium. The Leviathan has since focused on preserving that unique Otago gold rush charm from which it was born. And what’s the use of a spooky old hotel if there isn’t a spooky old ghost? That’s right gentlefolk, there’s a ghost. A presence is said to be observed by staff and a variety of guests closing doors, moving water glasses, walking around, and calling out your name … WHEN NOBODY’S THERE. Everyone loves a good hotel ghost. She's thought to be Antiss Silks, the second owner of the Leviathan. She was a savvy entrepreneur and business owner, starting a successful baking and catering business in Lawrence with her husband and four kids, before moving to Dunedin and running the hotel. Feminism needs more ghosts.

= COULD BE TRUTHFUL, HELL YEA GHOST

The Archway of Knowledge

literally nobody's ever heard of it, but now you have.

This one was a little tricky, as I could find almost nothing about it. As a young fresher, on one of the many peppy campus tours I dragged myself to, I was introduced to the “Archway of Knowledge”. This esteemed archway is that giant arch made out of spooky black sticks in between Mellor Labs and the Union building. My vulnerable young ears were told that if you run through it one way, you would get endless knowledge and definitely pass your exams, but if you run through it the other way, your IQ points would plummet and you would fail. I am haunted by my inability to remember which way you’re supposed to run. Did I once walk through it on accident and am now stupid? Probably, and it also freaks me out that there’s nothing on the internet about it, because everything is on the internet. Maybe I’m just too stupid to find it. I’m not going crazy, I swear. Anyone with information please tape it to the underside of the desk 12 paces Northwest of AskOtago. Make sure you aren’t followed.