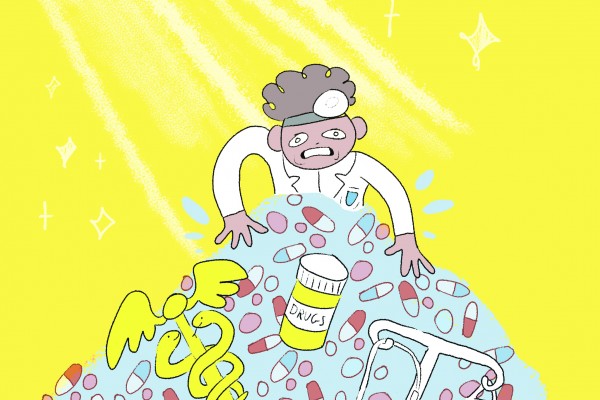 What to do if the course is not for you

It was August 2017 and Nick was getting med-worthy grades in Health Sciences First Year (HSFY). But he was not loving life. “I got quite anxious and didn’t feel confident in myself and my abilities. I started thinking I wouldn’t be a good doctor,” he said. Stress turned to sickness and he developed heart problems. He decided he “wasn’t capable” of entering medicine and cancelled his application.

It was a low point. Nick is now in the middle of a busy but rewarding semester - he’s nearly finished a Bachelor of Arts in Politics, Philosophy and Economics (PPE). Although he plans to apply for post-graduate entry into Medicine, he “fell out of love with science” after HSFY. “I was so drained after that year.”

Nick is just one of many students every year who change into a completely different course after studying HSFY.

Holly took HSFY back in 2016. “I wanted to be a doctor just like everyone else, but realised I probably wasn’t going to get A and A+’s so I aimed for physiotherapy.” But she soon realised she couldn’t see herself as a physio, switching to zoology after first semester, and later to environmental management and politics. “Swapping from Health Sci was the best decision I’ve made at Uni.”

Sophie excelled in science at school and thought that a career in medicine was the “ultimate way” to help people. But, fairly early into HSFY in 2017 she realised she “didn’t have the same passion for memorising anatomy and physiology and biological processes as my peers. I really missed doing creative work [...] I also struggled with mental health issues and think that studying something that wasn’t right for me was part of that.”

After completing HSFY she moved to Wellington to study design. “The thought of throwing away everything I had planned for and potentially disappointing some people was scary at first, but not as scary as the thought of staying.” She loves it, she’s way happier, and says changing “was the best decision I have ever made”.

There are many stories like Nick, Holly, and Sophie’s, because every year around 1500 students enrol in HSFY. Around two thirds are hoping to be accepted into professional programmes: Dentistry, Medicine, Physiotherapy, Pharmacy and Medical Laboratory Science. But there’s only 490 places.

In the second semester, only 1150 students continue as HSFY students. Like Holly, around 330 transfer to study other degrees, while around 20 leave Uni altogether. At the end of the year another 230 students leave Uni, which is probably around 1 to 2% more than the background attrition rate, according to the HSFY Director John Reynolds. Around 33% go into professional programmes, while 30% head into other Otago degrees.

HSFY Director John Reynolds said “people will always be angry when there’s a filtering effect […] if you’ve come in hell-bent on Dentistry or Medicine or Pharmacy and don’t get where you want to go, that’s obviously going to leave a poor taste in your mouth. We’re aware of that.”

In 2016, the University made changes to HSFY. “We cut contact time and extraneous information”, said Reynolds. It’s a “jam-packed year” and students need “time to think”. The main goal for rebuilding the course was to make HSFY “more achievable for students and give plenty of pathways of support. So far, touch wood, anecdotal feedback from colleges suggests it is a better experience.”

Even with an improved course, HSFY is still not right for everyone. But realising that can be hard, especially when students feel pressure to succeed. Holly said, "because I was doing three sciences that I had to do a professional degree”. Sophie felt similarly. “I always chose to follow what I thought other people would view as successful and admirable, but you need to be honest with yourself.”

Changing degrees was scary for both of them, but they’re much happier now they’re in courses they love. Holly said, “it’s nerdy, but I actually want to go to lectures and want to learn and read literature”.

Head of Student Experience Stephen Scott applauds students like Holly, Sophie, and Nick. He encourages students to “be brave” and reflect on whether they want to “carry on or change direction […] Really good results happen when students change,” he said.

Students shouldn’t feel like they've failed if they switch courses, he said. “30% of first years fail one or more papers." And the transition is not just about study; many students are away from home for the first time. Stephen feels it can be a good lesson for students to realise that “sometimes [things don’t] work as you thought it would. It’s not a reflection on you as a person.” Instead, students need to adopt an attitude of “‘well that didn’t go as I thought, what can I do now?”

It can be tricky reaching out for help. Holly felt anonymous while she studied HSFY. “None of the lecturers know you." Stephen echoed Holly. "Uni is not like school [where] your teachers knew your name and could tell if you were struggling.” He added, "it’s not that we don’t care, just that we don’t know. There’s a really good suite of support services. It takes being a bit brave and vulnerable, and it’s not easy.” That support includes Colleges and Locals, OUSA Student Support, academic help desks, AskOtago, and Student Health.

According to Stephen, for the last few years Heads of Colleges have proactively contacted students who have struggled and referred them to course advisors. “We know no one comes down to fail […] Don’t feel hoha. Do something about it."

HSFY help desks tend to be under-utilised, said Reynolds. Assistant Research Fellow in the Health Sciences Academic Administration Jo Oranje said “some students think 'I’m a burden' [to ask for help], but you’ve paid for this, you never do worse because you’ve gone and asked”.

However, in the competitive atmosphere of HSFY, asking for help feels hard. When Nick struggled with his mental and physical health in first year, he "didn’t want to tell someone or ask for help” because of what people would think.

Nick was comfortable with the HSFY content but found the environment really difficult. The culture at his hall was “that Medicine is the be all and end all, there is no future outside of it”. This made it hard for him to connect with how he was feeling. “I maybe had depression, but I don’t know.” He felt isolated in the large programme, living in a competitive hall of residence, struggling with financial pressure and being away from home. “I had never even been to the South Island before moving to Otago”, he said.

Nick felt like the competition ramped up from day one. "Lecturers said '2000 people do this paper and only 50 people get into dentistry'". He was constantly comparing himself to others and worried that every year in Medical School would be as intense as HSFY. Pressure built up until he cancelled his Medicine application.

Stephen believes “competition in study isn’t a good thing,” but that unfortunately there are limited places in professional programmes, and competition gets worse when people buy into it. He said a better attitude for students to adopt is to compete with themselves.

Stephen, whose PhD is in stress in fish, said that “stress is a common thing at Uni,” but “if it’s too intense it becomes abnormal”. At that point, students need to talk to someone “whether it’s a friend, RA or even a lecturer”, and work on managing their stress in healthy ways.

There are other pressures on HSFY students. Nick was eligible for Pacific Island entry to Medicine, but he felt like he didn’t deserve it because he “grew up with privilege on the North Shore; I felt like I was taking someone else’s spot.” He was worried someone would find out he was thinking of applying for Pacific entry, like other people “in Medicine currently who don’t tell anyone and worry people will find out they applied under those categories”.

People made ignorant comments around Nick like “‘Māori and Pacific Islanders don’t have to try,’ ‘why do they get special treatment?’ ‘it’s discrimination’ - they didn’t get affirmative action”. While doing HSFY Nick also realised he’d “never had a brown doctor in my life or professor in HSFY who was not white”, other than guest lecturers on Māori or Pacific health. This “internalised racism” made him doubt whether he was cut out for Medicine. Nick eventually realised he wouldn’t be taking someone’s Pacific Island entry spot, as Medicine accepts all Pacific and Māori students who reach the grade threshold.

Holly’s advice for HSFY students is to “try to maintain an open mind”. Rather than a professional programme, “your goal should be to do the best you can do and when you’ve done that, look at what options you have. Only compete against yourself.”

“I wouldn’t have listened to that advice at the start of first year”. But she stands by it.