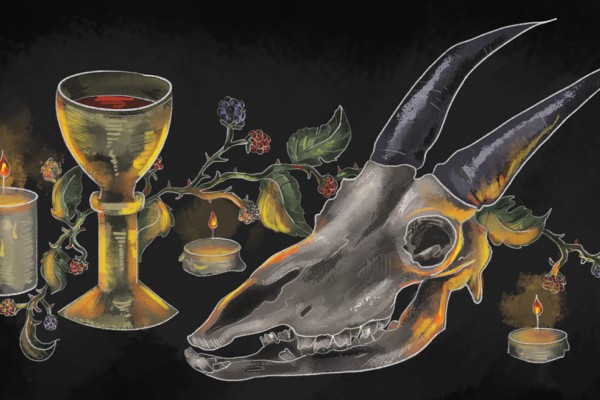 I tried to join several cults.

Like many people, I have struggled to discover my place in the world. One day some friends were discussing the Manson murders, which provoked an epiphany. I would indeed find my place … in a cult. I immediately set about attempting to join a cult which is defined following criteriae:

Elim Church started off as a funny idea, but quickly turned bad. The red flag was raised when they began to speak about the ‘issues with the modern world’, which I assumed would be just boomers blaming all of the world’s problems on smartphones. However, the conversation quickly turned to why there are too many genders and how ‘people get so easily offended these days’.

Still, I remained determined to find my place in the world, so I ventured forth. I scrolled through the ‘about’ section on their website and was immediately sucker-punched by several hundred years of hateful bigotry. What struck me was the intense homophobia. So I guess as far as beliefs go, you could say it’s ‘gays = bad, straights and Jesus = good’.

I never got as far as the rituals, but I can guess they’re something to do with women having lots of children and no orgasms.

Technically, yes. They’re desperate for supporters. However, as a person who is inordinately gay, it’s a no from me. If you hate the gays, you can join Elim via their website.

The Cult of Tristan

The Cult of Tristan began with stalking. Originally it was a group of ‘like-minded’ individuals who found an interesting image of an unknown man online, and proceeded to trawl the internet in search of his identity. Eventually they found him and were probably dissapointed. Never meet your prophets.

The Cult of Tristan adheres to a strict doctrine. If a member disobeys the rules, they are branded ‘sinners’ and are ‘castigated for their evils’, which typically involves a metaphorical ritual ‘burning’, followed by excommunication. They also have a list of peoples who are branded as ‘sinners’, which contains, but is not limited to:

Mary Berry: For being a witch

Megamind: For being bald, and for his hubristic attitude towards his own intelligence.

Theresa May: No particular reason given, or needed.

Not really, it’s just some oddballs who took a joke too far.

My simple request to join was turned down without a specific reason. I turned to bribery, but still I was denied. I ditched my last shred of dignity and started begging. Still nothing. At one point, I was told that only people who were present at the inception of the group were allowed to be part of it.

It became clear that I was not going to be allowed to worship at the altar of Tristan.

The Cult of Kelly Brazier

One lesbian is just a lesbian, two lesbians are a potential couple, and many lesbians make a rugby team. At least that’s how it works for the Lesbian Cult of Kelly Brazier.

One of their most sacred rituals is the initiation, also known as “Rookies Night”. Rookies Night is a night in which new members to the cult must take upon the great challenge of drinking as much alcohol as they can, and then take part in various obstacle courses. Those who pass are accepted joyfully. Those who fail are unlikely to survive the harsh southern winters.

They also have a an unnamed ritual, (which I have decided to call the “Flagellation of Sweat” in which teams of lesbians will fight for control of an oversized egg, and will throw and occasionally kick the egg).

As for friends and enemies, this cult is rather straightforward. The greatest ally to the cult is of course the great Kelly Brazier, who stands as a shining example as how to be the best version of you that you can be, not just for lesbians, but for anyone. Their main enemies are social discord and muscle cramps.

Not really, it’s just a women’s rugby team, some of whom happen to be lesbians.

I did ask to join, despite obviously being neither a woman nor a lesbian. I was politely declined, though I did receive an offer to come and watch. But I can’t help but feel like there’s something weird about just watching a cult. Being in one is fine, but resorting to just staring at them wistfully is a bit weird, so that’s exactly what I did.

I had been raised to believe that Satanism is a group of weirdos who worship the Devil. I couldn’t be more wrong - they’re generally nice people.

Historically, Satanism has been open and accepting of all peoples. Since the formation of the Church of Satan in 1966 by Anton LaVey, they have openly expressed support for people of colour and the LGBT community. Naturally, I was intrigued. Having been raised Catholic, I was used to religions trying to pray away everything they didn’t like about me.

As far as enemies, the Church of Satan isn’t a particularly aggressive or hateful group, although they don’t like people who wilfully misinterpret the essence of the Church. They also don’t like Trump and other socially regressive persons.

You could say that their progressive beliefs are in fact counter to the beliefs of many people, but nobody likes a pedantic bitch.

No. Despite the way that popular culture portrays Satanism, it’s not a group of deranged people killing innocent strangers.

Yes, they are open to all people who are willing to join, as long as you are a legally consenting adult and pay a USD$225 fee, which is far more than Critic can afford. I did try an alternative joining ritual suggested by a questionable source, performing incantations in the Critic office. If I accidentally summoned a demon, I didn’t want it to destroy somewhere important.

Later on that day, there was a loud boom and a meteor. Coincidence? I think not.

The Cult of the Hallowed Stone

The Cult of the Hallowed Stone began one night when a demonic figure appeared in my room. I thought he was demanding sexual favours, but unfortunately I was wrong. He just wanted me to worship the rock that I had stolen from the Colosseum when I was 8 years old. This was well-timed, as I had exhausted all my cult options and was in dire need of a sacred sect.

Our enemies are people who don’t like rocks and those times when the bathroom is unavailable because someone is having a mental breakdown in the only stall.

Our most sacred ritual is the Dancing of the Stone. Established members will encircle new members, making strange guttural noises. Then we dance until the first person falls. The leader (me) then lightly strikes the new members on the head with the sacred rock.

Yes because I said so.

I made it, so yes. I hit myself in the head with a rock and danced in a circle. Just another Thursday evening. However, I can’t help but feel like I wouldn’t be allowed to join this cult if I hadn’t created it.