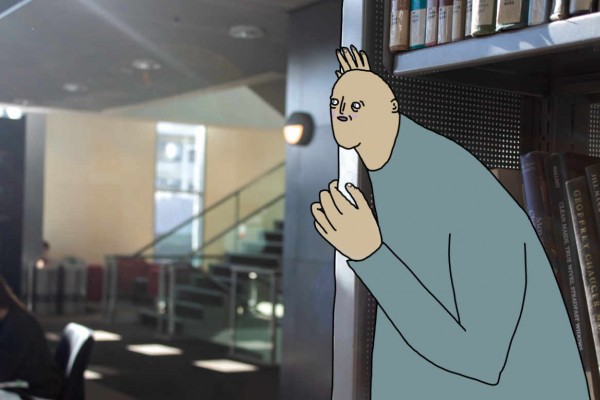 To Catch a Predator: Leaving Stuff Unattended in Various Libraries

Friends, the festivities of exam season are almost upon us and at this time we should give thanks for how blessed we are with our University.

Believe it or not, some people will never get to live the classic Otago experience of watching a couch aflame with a mate’s shoe in one hand, a can of drink in the other, while having some stranger grind up against your thigh like a dog with fleas against a carpet. You just don’t get that at AUT.

We also have our big, warm libraries where shoddy-flat refugees and hall collegians can go and not be cold.

Yes, with exams on the horizon we must bow before the libraries and pray for a space to work. In the coming days, their seats and heaters will become precious currency, and if you’re new to the Uni you must be vigilant; when a seat becomes free it’s like opening a jar of gherkins at a maternity class.

You will have to deal with tricks and tripe from others, and you, your stuff, and your seat will be in danger. But don’t fret because Critic is here, putting a 2012 MacBook Air, 6 New World donuts, and all of my stationary at risk, to bring you a social experiment with one goal: to see how long it takes for my shit to get snaked.

Offering plenty of tables, chairs, and warmth, this three-story library was the first stop on my journey. It’s where medical dreams wither and dentistry students gleam. On the third floor, there are large glass containers called ‘group study zones’ but they’re also good for screaming at your reflection and then discovering the glass isn’t soundproof.

I spent three hours watching my backpack out on a cushioned seat, peeping through a glass cabinet full of photos tripping through time. And what did I observe? Nothing. I was suspiciously hurt that no one fiddled with my stuff.

Shrugging off the snobby lack of attention my things were being shown, I headed to the Richardson building’s Law Library. If there is one place full of crooks, surely it is a library full of future lawyers.

If this is your first year at the University, and you’re studying LAWS101, the law library is a superb place to go — though for a more comfortable stay you should keep your freshness to yourself. To avoid catching the eyes of others, the trick is to not shower in the morning. I personally find the Law Library to be a pleasant place to stay.

This library’s multi-layered structure means you’re free to leave your stuff unattended, just as many people do and as I did as well. I spent my entire morning in the Law Library, perched precariously around a corner like a peeping tom, giving ample opportunity for someone to take my stuff. Absolutely none of you jerks did. I spent the morning alone and sad.

In this technicoloured labyrinth of journals varying from vertebrate pest research to Soviet physics, the vibe was pleasantly calm and free of strife. I left my things spread out tantalisingly across a table on the ground floor and, after some genuine study, actually vacated the premises entirely. I took a walk, evaluated what I was doing with my life and tried to remember why I’m at university, before returning to the library.

Hoping to get a semi from my laptop being nicked, I returned to find all my stuff present and accounted for, surrounded by a gaggle of students who had pushed some of my spread over. I remained limp and unaroused.

Ah yes, if there was ever an elite vintage library that stands as a bottle of Chateauneuf-du-Pape does among half empty cans of Diesel, the Hocken is it. The Hocken contains a great mass of old texts, lexicons and art, and a man with a Bulgarian weightlifter’s moustache is ready to get them all for you. But is it a dangerous hotbed of petty theft?

Fucken’ not even close. Your food, water bottle, and bag are mandatorily housed in lockers and you get to keep the key. You need to sign in, so any would-be thieves are automatically identifiable, and you’re monitored via camera while a legion of hawkish, middle-aged librarians eyeball you through their spectacles, and shun the grubby little sausages you call fingers.

Upon signing into Hocken I found its studying inhabitants to show little consideration for what I was doing — nor my stuff — as most of them, PhD kiddies and oldies alike, were more concerned about finding a copy of the 1989 New Zealand Alpine Journal than looking at an undergrad’s Photo Booth nudes. What was wrong with these people? I don’t know.

You’ll be pleased to know that Hocken offers a small range of coffee and tea in the kitchenette.

That’s right, folks, in Invercargill, among tailored lawns and facing a row of Tim Shadbolt’s finest constituents, this library is the hottest place for you to study this exam season — and it’s only a cool two-hour drive to get there.

Unfortunately, I couldn’t travel to the library to leave my stuff lying around — I was too busy watching my bag through a glass cabinet in the Health Sci library. So instead, Critic sent resident booze-reviewer, Sinkpiss Plath, to analyse the library’s predator count.

Plath spent three hours with a 2014 Lenovo ThinkPad, apple strudel, and absinthe-filled sippy-cup sprawled around one of the library’s computers, all whilst nestling surreptitiously behind the printer to watch. Plath sadly reported no commotion in the mostly empty building, but thoroughly enjoyed the entire strudel on the journey home.

This library is so overt it’s covert. Almost like a low-key Central Library, this one is new, fresh, clean, has plenty of space, and a kitchenette too. You may find your only concern is the choice of couches, which are sorely uncomfortable to crash on.

I took a snooze on Robertson’s second floor for a solid hour while I displayed my goodies to the public. Waking was like when you fall asleep in a bed at a party and you end up having quite a good dream, but you awake to a stranger at the end of your bed, and you’re like, “why?” and they leave and you feel sad about what you saw.

I found all my stuff exactly as I had left it before drifting off. For a library with “rob” in the title, this was fucking bullshit. WHERE ARE THE CRIMS?

I left the Robertson Library as a husk - a husk with a presentation, essay, and two tests on the near horizon. I began to question it all. What was I doing this for? And why haven’t I felt nibbles on my rod?

Without hesitation, I can say that Central Library is the University’s cornucopia. It’s jammed full of literature, tables, chairs, cushions, power sockets and study rooms, and for many it is the only library they know.

I arrived at the bustling Central Library around 4pm. The seats were semi-full and it had the usual hum of paper scrunching, coughing, and annoying chatting chads guffawing about “being dusty”. I was ready to see the worst.

After making my way up the steps to the second floor, I found a free set of red cushioned couches overlooking Castle lecture theatres. I set up my laptop and got my lunchbox out, placing the six pink frosted donuts I had on top of it, before slinking soundlessly behind a bookcase of Portuguese and English literature. If I was Wile E. Coyote, this was the big fucking red X, and all I had to do was wait for my Roadrunner. Meep meep, mavafugga.

I spent an entire night with my dead eyes locked on those pink spherical delights, silently wishing for someone to come nibbling. Only a short bathroom break left them unattended, yet I returned to FIVE DONUTS. Success! Someone had eaten one of my (now potentially rather stale) donuts. I left Central Library, finally sporting my long-awaited semi, ecstatic in the knowledge that somebody had predated upon my things.

After days of searching and hours of watching, I had found my predator. I doubted myself from the Science Library to the Robertson Library, and fell for the greatest trick the devil ever pulled: convincing me he didn’t exist.

But remember friends, that donut-scoffing creep is out there. And it may have been my irresistible donuts this time, but it could be your stuff next. So, this exam season watch your stuff. Because you could be next.