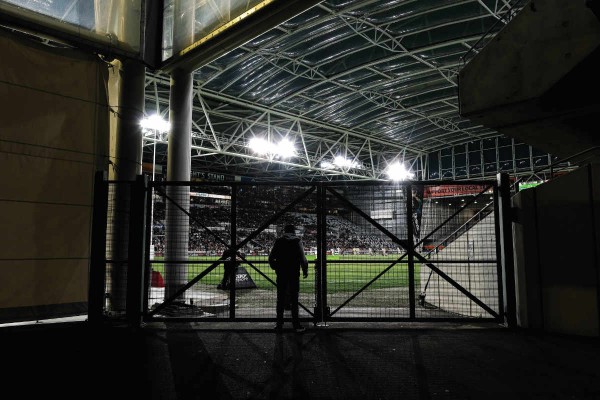 Fucking bagpipes. We walk past an ominous circle of tartan, practising on the tarmac like something out of Children of Men. “Jump in,” Amber the contracted PR person for the fast food restaurant says. Okay. We hop on the back of a modified golf buggy shaped like a chicken bucket. It drives the long way round the edge of the pitch to deliver us a ten second walk from where we began.

I don’t understand rugby in the slightest. I went to an all boys’ school and played because I had to, but nobody would explain the rules to me. Everyone thought I was taking the piss when I said I didn’t know the rules. So naturally, as Critic’s intrepid sports reporter, I jumped at the chance to explore the Highlanders game against the Chiefs at Forsyth Barr Stadium with a media pass. Even better, (Critic Photographer) Aiman and I got invited to watch the game from the KFC stand, as part of an advertising promotion for that particular ‘restaurant’.

The pipe band finishes and nobody applauds.

The match tonight has a fairly sparse turnout. The seats are mostly empty, both in the stands and where we are, in a shipping container painted a vulgar red. Black Sabbath comes on before the game kicks off with a steadily rising hum. Soon both sides have scored, rising level at 7-7.

The pitch is a veritable cornucopia of visual noise and aural stimulation. There are ads everywhere for corporate sponsors. We can’t hear the announcements, as they seem to be aimed primarily at the North and South stands. The Zoo has shitty pop music blasting each time something even vaguely interesting happens, or if there’s a pause in the game. Each section of the audience is experiencing a slightly different mediated spectacle, stratified by age.

The other fans in the KFC box got there as a result of a social media promotion. A guy I talk to says that what he likes about rugby is the “big hits”. There’s a scrum happening in front of us, kicking up tufts of dirt. I ask him if that was a ‘big hit’. He says no. I decide to keep an eye out.

“Here we go, boys”, a bald old white guy at the front of the box yells profusely.

I go outside for some air. I’m sweating heaps. I wore five layers because I thought it would be way colder. I ask Amber if I can get into any other sections with my press credentials. She says no. I’m thrown into an episode of existential dread that I’ll have to stay in the KFC box for the whole game. The food mascot comes out and tries to fist bump me. Its costume is oddly reminiscent of Cornelius Hawthorne. 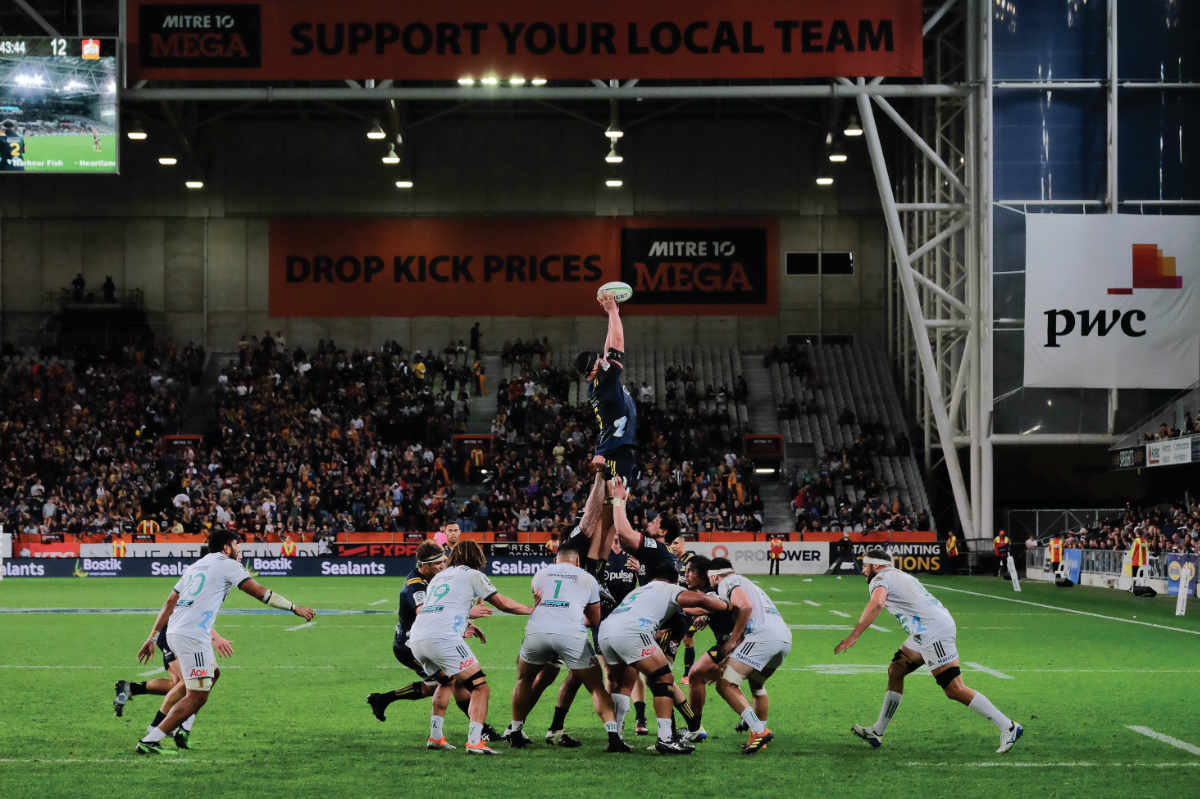 I go back inside. A family with young kids joins the box and the bald guy smiles. The neck beard father of the family begins yelling too. “C’mon boys”, he shouts. A guy in a ‘rock solid’ jacket makes banter with the other sports fans. “Rip his legs mate!” The old bald guy screams at the pitch. “Do you kids have earmuffs on?” someone asks jokingly.

The score is now 12-7, and acrobats come out and whirl on the sides of the pitch. The nauseating smell of fried chicken is beginning to linger inside the hollow shipping container. It’s making me feel peaky. I decide I need to get out.

Later I realised that Amber totally lied to me about having to stay in the KFC box. I tell her I’m going to grab a drink, I slip out the giant garage door into the North stand. It’s soon halftime and, as far as I can tell, the boys are all doing a really good job of running and tackling and kicking the ball.

I decide to interview some people and get them to explain what’s going on. The first BCom student I interview thinks there is probably a gay All Black somewhere, closeted.

I find some drunk lads who all play rugby. Most of them have bruises on their faces. They loom over me. One of them is a student, the other is a seaman. When he first said he was a sailor in the navy, I thought it was a double entendre. He says he joined the navy because “it’s the most deployable force”, and because of a sense of calling to help others. I’m weirded out by the contradiction.

The jockbois with the bruises all love rugby. They like the physical side of it and enjoy the feeling of respecting their opponents on the pitch and “winning games”. They throw shade on KFC’s advertising promo campaign, doubting it will be effective, as the message doesn’t register on a drunk audience focused on the game. They tell me rumours about dirty KFC restaurants and, apart from sailorboi, tell me I can’t print anything they say. I leave.

The Selwyn Ballet finishes and the second half kicks off. People are still kind of fizzing. I talk to the St John volunteers for a minute (they’re there for the crowd, not the players). The stadium sells water for $5. The Red Frog’s give disposable plastic cups out for free just around the corner and are bizarrely stringent about not talking to media.

The second half begins with a really good line by the Chiefs. Their passing game brings the ball all the way up the left wing. Number 14 cops a tackle. There’s a scrum where the Highlanders manage to get the ball back to the centre where it gets a big yeet to the forwards. One of the blue boys catches it as he’s hit by a tackle. Then there’s another scrum, and a pause in the action as a medic runs onto the pitch.

I’m standing close to the big man with the bald head again. He starts yelling something about the medic this time. There’s a different batch of people in the lonesome, distant KFC stand for the second half. All the OG’s have been turfed out to watch the second half with the plebs. Bald guy is sitting in the section where the people in wheelchairs are hanging out: “Smash ‘em out of the line Highlanders, take him right [unintelligible]”.

I’m about to go over and ask him to do an interview with Critic, but he’s approached by a security guard and asked to leave. The man he was sitting with splits. I watch as he gets escorted up the concourse and shown out through a hole in the crowd barrier.

I don’t want the chicken box to lay its greasy tendrils on me. I decide to try and make it to the South stand through the Zoo. I talk to a young guy going to Alberta in a month as I wait for the security guard to let us through. “That’s where the oil sands are right?” I ask. “Yeah man, it’s gonna be sick,” he says and trots off into the distance.

The game seems to have really slowed down. I arrive at the top as Aiman calls. I’m now opposite the KFC box and I wave. The score is now 26-12 until there’s a ‘big hit’ at the far end of the field and the crowd starts going nuts. There’s a bunch of players by the sidelines wearing hi-vis. They run up and down from the try line to the perimeter line looking serious and doing pushups.

I feel like I’ve finally found a nice quiet place to sit and enjoy watching the game until security moves me off the topmost seat-row. I sit by a family of six and interview them. The mother and father have really different ideas of footkickball. The mother thinks that it’s a shame that “they don’t show enough of the other sports”. The boys all like rugby.

I realise the game actually goes on for eighty minutes, which is longer than I expected. As I can’t get through to the South stand, I decide to have a closer look at the Zoo and interview some students, but they’re all really boring in a way that is quite contagious.

There’s another big pause in the game. Speakers blast Bon Jovi over the students.

Someone cranks the volume just before the chorus. I can’t tell what is a more depressing embrace of a soul-crushingly vapid corporate culture; the emblazoned overalls of the student crowd, or all the little kids in in matching logo’d bush-shirts. The music switches over to April Sun in Cuba and I resolve to return to the KFC box, as the game is nearly over.

The Red Frogs are still adamant they won’t talk to media.

The roller door to the ODT stand is sealed shut, so I climb the middle stand near the edge of the pitch. The score is 24-28. With three minutes to go, there’s a commotion and all of a sudden it’s 28 all. The game kicks into overtime.

I interview a bystander because it looks like the game has finished. He explains that it ended in a draw, characterising the game as “a bit flat”. The players all line up to shake hands. I stroll back to join Aiman at the KFC box.

When we go to leave there are a bunch of players still doing those weird running pushup things, this time joined by a bunch of little kids. The stadium will be underwater in 20 years and I can’t wait to come back for the water polo.