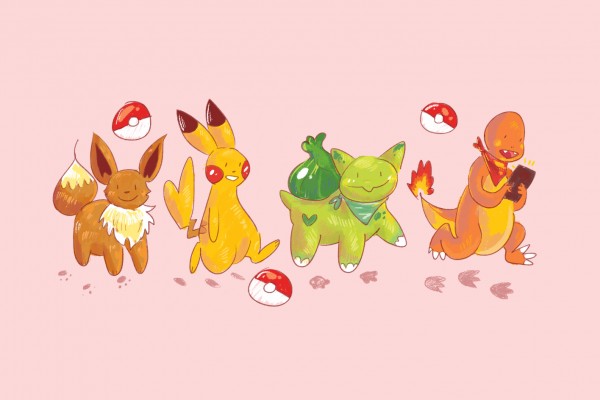 Meeting the Trainers of Dunedin: the Pokémon Go Capital of New Zealand

Creatures? Fights? Long walks along Studentville? No, we’re not talking about Castle on a Saturday. We’re talking Pokémon Go, baby.

I used to think my flatmate was sneaking out at midnight for shameful ciggies. It took weeks before they confessed that they were, in fact, doing something far more embarrassing. They were headed out to Pokémon Gyms. I didn’t believe them at first, thinking that the Pokémon Go fad had died in 2016, the same year of its birth. To my surprise, the game is very much alive and well, with a Facebook group nearing a thousand members and an active organising chat with well over 200 participants. The group is frequented by newcomers and veterans, looking for team meet-ups, asking questions, and bragging about their latest finds. It all seemed fucking wholesome.

To ensure I wouldn’t die of over-exposure to positivity, I took care to organise our get-together on a super gloomy Dunedin Friday. Clare, a postgraduate student, was the only one who turned up at the meeting point, but promptly explained that there was a ‘raid’ (a thing where multiple players have to work together to take down a big rogue boss) happening at that exact same time on the other side of campus. As we rush to join them, she checks her phone to a find that an egg she was incubating in-game was hatching. “You walk a certain amount of kilometres and it gives you a Pokémon,” she explained. I ask if this means she has to keep the game running and her GPS on at all times. She said, “They’ve incorporated a pedometer within your phone. So, if you give it permission to, it can count the steps on your phone.” Pokémon for fitness?! Move over, FitBit.

We arrived at St. Dave to almost twenty people huddled in two separate groups. Considering campus is a fucking a ghost town during the mid-semester break, this was pretty surprising. The players raised their heads briefly to acknowledge our arrival, but promptly bobbed back down to focus on their screens. In the time it took to introduce myself, the rogue boss was defeated, and there was a chorus of ‘YES!’. Clare immediately suggested that we head to Alhambra for the next raid, and though most of the crowd remained behind, eight of us peeled away and headed east.

Alhambra is one of dozens of Pokémon Gyms around the city. The group explained that the more gyms your team controls, the more perks are available to you. Apparently, these perks are refreshed for collection at midnight, which explains my flatmate’s enigmatic, somewhat sexy, disappearances in the night.

En route, I asked them which teams dominate in Dunedin, and if there was any hot insider gossip. Is Dunedin the locale of an intense gang war between Pokémon teams? Do these teams consider it treason to fraternise with the others? Is the punishment death? Clare explained that there used to be “a huge rivalry between (teams) Instinct and Mystic” due to “a lot of drama” between certain players. Apparently, that drama left with those players, who either moved away or stopped playing.  Clare said, “We’re seeing a new wave of players now. Which is good, cos they don’t have the historical knowledge of the Dunedin Pokémon Go rivalries.”

When it comes to pure team numbers, two girls, Laura and George, almost in unison, said, “Blue [Mystic] dominates”. George said that blue and yellow (Mystic and Instinct) were definitely the main ones. I suggested that it might have something to do with the Highlanders, or a kind of patriotic Dunedin thing. The others weren’t as convinced, but did note that “everywhere else it’s blue and red [Valor]”. Of the eight players there, seven of them were Mystics, and one was a lonely Instinct.

Most of the players said that they had been playing Pokémon Go from the beginning, but many stopped for a short period of time “because it was shit”. The game was initially released unfinished, and most of the aspects that make it thrive now weren’t available then. George said, “you had to triangulate a Pokémon’s location by its footsteps. There was no trading, no raids or anything. Just catch the Pokémon. I lived in Queenstown at the time, and the majority of them would end up in the lake.”

Laura said that for a while there was a website that people could use to find specific Pokémon locations, which meant many of them would road-trip out to South D. Adorable. But they all agreed that introducing raiding is what has made the game exponentially better, as it is now more of a “group activity”.

I tried to join the new raid, but within moments of seeing the very horn-y and very thicc rogue boss - Giratina - my phone died. They all sympathized, and said they usually bring power banks with them for that same reason. No one offered to let me borrow theirs, though. Greedy cunts. The conversation died as the raid reached its crescendo - and, then, another ‘YES!’ in unison. Giratina was defeated.

I asked if it was mostly students who played. They said that in North Dunedin that can be the case, but that there are plenty of locals, workers, and recent graduates, too. One player said that South D was definitely full of “real people,” and “cool dads” who bring their kids with them.

However, despite the mechanics of the game being built on movement and GPS, not everyone who plays the game plays in person. These players are called “spoofs”, which, along with sounding like the scientific word for semen, refers to someone pretending to be somewhere they are not. “So, you can just sit at home and play in your basement,” said Laura. George said that spoofing can be “real lit,” as places like Singapore “have some wild Pokémon”. However, they all agreed that not being surrounded by people “takes the fun out of it”. I’m sure there are many people who prefer to spoof in the presence of others, though (sometimes for money).

For these players, it’s the Pokémon Go community, and seeing the same brave soldiers regularly, that has kept them playing for these past three years. Now, once a month, Niantic, the developers of Pokémon Go, host a community day at the local parks, where members of the 200+ strong community can go hunting for uncommon and ‘shiny’ (cute) Pokémon.

If that doesn’t melt your heart and make you want to join in the fun, then you’re one ice-cold motherfucker.