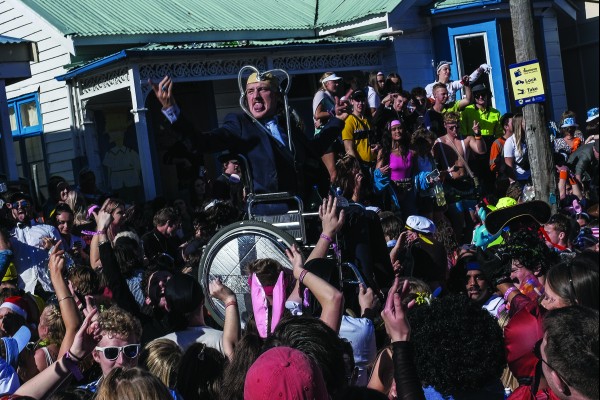 April 13. The infamous Hyde Street Party started off for me with a bit of a whimper. Our photographer, Aiman, and I were shown around, stone sober, by someone from OUSA, along with a bunch of other old-fart media guys from around town. It was 9:15am and nothing had kicked off yet - nobody was really out, but the music was still really loud, and a few people were milling around awkwardly as the media guys took staged photos.

Upon skeeting out of this snoozefest, I promptly ducked into the liquor store and bought half a case of beer and a bag of chips. I immediately chugged four beers, stuffed the rest in my pack, and hopped around in the bushes making strange noises trying (unsuccessfully) to force myself to burp. Then, feeling significantly more in the swing of things, I plowed back through security into Hyde, flashing my media pass (“I’m with the media. No no, I’m good, no worries, let me through. I’m with the fuckin’ media, man. Hahahaha.”)

I approached two women dancing on a brick wall, dressed in schoolgirl uniforms.

Owen: “How much do you reckon the biggest shit you’ve ever taken weighed?”

Owen: “Yeah, like the biggest dump you’ve taken. How much did it weigh? Approximately, of course? I’m with Critic - it’s okay.”

Girl #2: “We aren’t aaanswering that! Ask her!” *points to another similarly costumed girl nearby, visibly drunker*

Girl #3: “Fuck off! Ask him!” *points to the guy next to her, who’s wearing a plain white T-shirt with purple tentacles drawn on it*

Suddenly, it becomes clear what this costume theme is. Fortunately, the gentleman is very keen to answer my question.

“Yeah, like... I reckon sometimes when I shit there’s a lot of liquid shit coming out with the solids too, you know? Like if you include that, could be quite heavy. I dunno. Maybe, one kilo?”

At the time, I just nodded emphatically, wrote this down in my notebook, and walked away. But guy, wherever you are, for the love of God go see a doctor.

I began asking several guys the question: Would you rather have a banana for a penis, or a mushroom for a nose? This led to an interesting debate with a guy dressed as Thor, who positioned himself firmly in the mushroom camp, citing potential breakage as the deciding factor: “If you have a banana, you’d get 99% of the way only to be like, ‘Sorry, it’s a banana, and it’s broken.’” A grim prospect indeed, his friend conceded, but any chap with a mushroom for a nose would likely not even be getting his foot in the door in the first place.

Total count: Out of 34 males interviewed at Hyde Street 2019, 26 stated they’d rather have a banana for a penis (regardless of potential breakage). The remaining eight preferred to have a mushroom for a nose. Many in the former camp, interestingly enough, appeared rather enthused by the prospect of a banana dick (of note: the average banana is 20 to 23 centimeters in length, noticeably longer than the global average penis length). Motivation?

I proceeded to the line of Port-A-Loos, where I waited in line next to two girls, dressed as either Hillary Clinton or my ex-girlfriend, for what felt like forty minutes. Then again, it might’ve only been four. When I finally reached the front of the queue, I was promptly shoved aside by a large guy with a banana peel on his head, “My dick’s about to burst, cunt!” He stumbled sideways into the loo and nearly shoved his hand into the toilet when catching himself.

Pissing in the toilet, I for some reason decided to take a picture of my piss stream on my phone, thinking “yeah, (Critic Editor) Charlie’s gonna love this. This could be a rad cover for the issue.”

At the time of writing, I don’t know what the cover of the issue will be, but I’m willing to bet it’s not my piss stream.

I stood on the porch of a flat called “The F Shack” and talked to a guy dressed up as my best mate’s older brother Johnny, who did too much DMT in high school, believes aliens built the pyramids, and still lives in his mom’s basement at age 27.

At first, this guy and his mate aggressively insulted my journalistic quality (“That’s shitty fucking journalism bro! What fucked up questions are you fucking asking?”), but eventually he seemed to feel a bit stoked about the possibility of being in Critic, and began to open up.

Initially curious regarding the banana/mushroom conundrum, he posed the question, “Is the mushroom a psilocybin one?” seemingly insinuating a willingness to consume his own nose for a singular shroom trip.

When I responded that no, it would not be hallucinogenic but just a standard mushroom, he came out with the official answer of: “I’d rather peel my banana back into the mushroom that keeps me captive” (“Whoa look at me I do lots of drugs look how cool and trippy and philosophical I am huhuhu have you ever heard of Daoism?”)

Cringing from secondhand embarrassment, I sat on the curb for five minutes and drank a beer next to a guy who wanted to be referred to as “Banter.” I don’t remember much about this except that he was wearing glasses of some sort and I think he had big, hairy jowls, like a Mafia-boss or something.

I interviewed two girls dressed as cavewomen making out in an alleyway. I don’t remember what we talked about, but they identified as “Thelma and Louise,” and at one point Thelma stated she would enjoy having penises for fingers and a vagina for a mouth because, “I’d always have fun with myself.”

@ the guy who made Human Centipede - here’s your next movie idea, ya wacko.

I approached a guy wheeling around in a chair as Professor X from X-Men, in what was easily the best costume I saw that day. I asked him, “Would you rather live in a rubbish bin forever, or sleep with your grandmother one time?” to which he responded “Rubbish bin forever! NEVER my grandma.” Looking for a different answer, I changed the stakes to “Would you fuck your grandmother for one billion dollars, if nobody knew about it but you two?” Receiving a firm negative again, I retreated, vowing silently to come back.

Leaving this encounter, I became entangled in a long orange string trailing off of a guy dressed as Spiderman, and stumbled into a glassy-eyed girl.

Apology unaccepted, apparently, because she began screaming “WILLIAM! WILLIAM! WILLIAM!” in a pitch that could’ve shattered glass. It wasn’t clear who she was summoning, though the screaming (which lasted at least a minute) took on a slightly necromantic intonation.

I began to have premonitions of a hulking rugby player who would slice my ass up like raw carrots. I skedaddled.

Things began to get a bit funky here. I danced on a wheelie bin for a few minutes, then jumped off, nearly sprained my ankle, and flashed finger guns to no one in particular. Slicking back my hair I leaned against a wall, trying to look cool, and watched three girls attempt to hit a birdie back and forth with badminton racquet. After nine throws, not a single racquet made contact with the birdie, and one girl proceeded to vomit chunks of what appeared to be tuna.

I was hit in the head by several items over the course of the day. I decided to begin keeping a list. These items included: a beer can, a chopstick, a small plastic toy saw, an inflatable basketball, another beer can, and a half-eaten sausage.

I followed a guy I vaguely knew from a lecture into the backyard of a flat, passing by no less than two girls squatting pissing directly onto the pavement.

In this backyard, I got tangled up talking with a guy about America. We argued for a bit and were drunk enough that it almost came to blows, but the situation defused.

As is standard with this sort of nonsense, two minutes later we were slapping each other on the back and using “bro” a lot. At one point, he took out a retainer and revealed several missing teeth and a visage reminiscent of Javier Bardem’s villain in Skyfall. This was in-sync with a declaration of his status as a boxer. Maybe I dodged a bullet there, or maybe this guy has just run into one too many doors in his life. I guess I’ll never know.

I returned to a much drunker Professor Xavier, still wheeling around in the chair, who now reported that, “Yeah, for unlimited money… I’d definitely fuck my grandmother.”

Score. I rewarded myself with the remaining three beers in my half case, and very quickly lost all journalistic capabilities. All in all, a great day on the job.

A couple facts gleaned over the course of the day:

The most interesting hypothetical posed was: “which two superheroes would you most like to watch have sex?” The general consensus here, out of thirty interviewed parties, was a bit muddled. Hulk was a common element, as was homosexual sex in general because, as one girl put it, “FUCK HETERONORMATIVITY”.