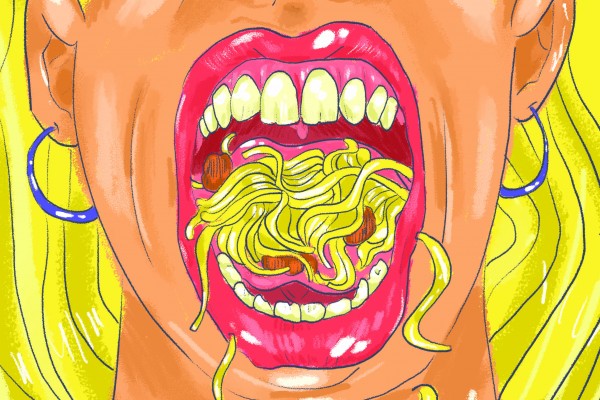 Critic’s Guide to the Best Food Trucks Around Uni

A restaurant with wheels. Food without a consistent location. Cuisine sans frontiers.  A trailer filled with a range of hot cooking implements that must create some kind of health and safety hazard. As much as I love food trucks, they’re a bit weird. Ordering from a food truck is like spinning a roulette wheel – is the sauce hot chilli or sweet chilli? Is it true that Hussey & Laredo have a secret bagel advertised on Instagram? Does Rising Sun ever have vegetarian dumplings in stock? Life’s too short to eat disappointing food, so Critic went to seven food trucks near campus to figure out your best options for lunch.

In terms of aesthetically pleasing food, Hussey & Laredo have got it sorted (they’re also aesthetically pleasing people). I pay $10 for a bagel which is a visual symphony: black poppy seeds and white sesame seeds, green spinach, red chilli jam, hummus and, most importantly, halloumi. The bagel is crispy and well-toasted, with dense and satisfying dough, and the halloumi is perfectly fried. Halloumi is by its very nature delicious, and there is a lot of it in this bagel.

There’s a slight imbalance though. The chilli jam is delicious, both sweet and spicy, but the garlicky hummus dominates the bagel. I love garlic, and hummus is amazing, but there’s just too much. The halloumi, while delicious, is subtle, and would have worked better with more chilli jam and less hummus.

The bagel comes in a cardboard container, and they give me napkins. So 10/10 for recyclable, convenient packaging. But it’s not all convenient. The halloumi is slippery and a few pieces slide out of the bagel as I’m eating. I would back myself to eat this right before a lecture and walk in looking relatively presentable, but I would have to forego those last pieces of halloumi. And I’m not prepared to do that because I paid $10 for this. Essentially, if you want to eat all of the halloumi, it’s going to get messy. Other than that, the bagel is (relatively) easy to eat, the service is fast, and the flavours are strong and satisfying.

I’m not going to lie to sound more cultured than I am: I had no clue what jianbing was until I walked up to this food truck and ordered it. To be honest, it’s still a bit of a mystery. I paid $10 and in about two minutes I was holding some hot food in a brown paper bag like a surreptitious bottle of alcohol.

When I opened the bag, I was essentially confronted with another bag in the form of an egg wrap. I thought I might be facing a Russian doll-type situation. Once I opened this wrap, would there be another wrap inside? There wasn’t. Within the egg wrap was a parcel of meat filling, with chunks of beef and cabbage stir fried together in chilli sauce. There was a LOT of filling, and the fragile egg wrap did not have the structural integrity to support it. That engineering flaw made the jianbing impractical to eat on the spot, and impossible to transport. I was forced to eat my jianbing beside the grass in Union while wearing a white shirt. I failed miserably. It was messy and disintegrated quickly.

On the plus side, it tasted great. The beef was spicy and flavourful, balanced well with the cabbage and spring onion, and they gave me a really big portion size. The spice level went beyond ‘mild butter chicken’, which was a pleasant surprise for Dunedin. The beef jianbing was really good, it was just really hard to eat.

Where: who the fuck knows, probably Mosgiel

Everyone knows that churros are a key element of a balanced lifestyle. They have sugar and cinnamon and chocolate or caramel sauce. According to the Churros Olé website, Spanish people eat them for breakfast. I would suggest that makes churros a key component of a healthy Mediterranean diet.

Six churros for $10 is solid. That was the pricing the last time I could find the food truck, anyway. Seriously, the churros are good, but access to them is a problem. They’re sporadically on campus, and then not, and then at rugby games, and then at airshows out in Omakau. I just want some churros, but trying to track down this food truck is a nightmare.

This could be the best food truck, purely off the back of churros being an amazing food, but there’s no consistency. I can’t get my daily hit of cinnamon and sugar and burning hot donut pastry stuff, so what’s the point? The unavailability of good churros in North Dunedin is a problem. Churros Olé could be the solution, but they keep gallivanting around Otago and visiting things like the Mosgiel Food Truck Market (why?).

Rising Sun are reliable and consistent, always available whenever you’re feeling dusty and needing some carby goodness to drag you through a day of lectures. The dumpling/pork bun combo is $8 for six dumplings and one delicious pork bun. That pricing speaks for itself. Rising Sun is the people’s food truck.

The dumplings are delicious and crispy, but the insides sometimes shoot out when you stab them with a fork. With the added chilli oil (admittedly a choice I made), they can be quite messy to eat. Same with the pork bun, which again, was doused in a lot of chilli oil. Both the dumplings and the pork bun would be easy to eat without the chilli oil, but you would miss out on the flavour. The pork bun is exactly what you expect from a pork bun, doughy and meaty with a pop of curried flavour in the middle. Bonus points for having the most wholesome Facebook page in the world. Rising Sun knows their target market and they are here to help you through your hangover for the low price of $8.

Where: Museum Park on Tuesdays

Walking across Museum Park one Tuesday, I stumbled upon Falafel Mate. Before that, I had no clue that Dunedin had a food truck that made kebabs. After doing my research, I learned that Falafel Mate is the food truck owned by Ali Baba Restaurant. Which makes sense, because both of them do great kebabs.

I ordered a falafel wrap, which cost $8. It was amazing. The falafel was crispy, there were generous amounts of hummus and mayo and sweet chilli sauce, and they had some extra hot sauces out the front, which were delicious. I have nothing more to add. Falafel Mate do great falafel, mate.

Where: Wednesdays, Albany beside Museum Park

Citizens’ matte black food truck and communist imagery really got me amped up for some authentic street food. I ordered a fried chicken bao for $6 (they also do a two for $10 deal) and I was excited. Bao is one of my favourite foods.

I was disappointed. This was an average bao bun. All the components were there – the bao was fluffy and light, the pickled red cabbage was tart, the fried chicken was crunchy, and the spring onions gave the bao bun a lift. But something was missing. Each ingredient worked individually, but they didn’t work together. The sauce was a kind of peri peri mayo, but it didn’t have enough flavour. The chicken and cabbage needed a strong, heavily-spiced sauce to hold them together.

My bao was a communist revolution without a uniting force. The flavours were meant to be collective; instead they were individual and sad. They worked against each other instead of working together. Rising Sun are the true Marxists of the food truck world, and Citizens are merely revisionists.

Salchicha has the best looking food truck. It has some retro wood-panelling, and they’re constantly playing Spanish pop music, which is authentic and fun for the five minutes that it takes me to get my food.

Again, I was introduced to a new kind of food with this truck. Salchicha literally translates to “sausage”, but these sausages are served in a long, garlicky baguette. The baguette is doused in olive oil and what I can only assume is an entire head of crushed garlic (seriously, almost too much garlic, do not eat this if you’re planning on going near anyone with your breath for the next two hours), as well as a lot of parsley.

The bun/sausage combo opens up a whole new world of dick jokes. As my flatmate commented upon watching me eat it: “It’s like a dick coming out of a foreskin”. Despite the unappetising imagery, this was a yum baguette. If you like garlic bread, and you like sausage, you will like this combination of the two things. It was easy to eat and compact, and they gave me some luxuriously thick napkins to take away. While it’s not a light lunch, it is fulfilling and delicious if you feel like eating some sausage and bread. My main issue is the price. Even though the salchicha was good, $11.50 is a lot for a glamorous snag.

Rising Sun wins. For value, for flavour, for consistency, and for range of sauces, they have you covered. Long live the true people’s food truck.