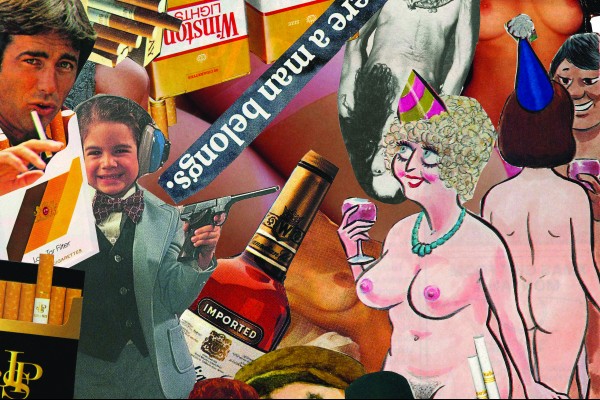 ‘80s Playboys: Reviewing the Sins of Our Fathers

I’ve never really considered myself a classy man. The last time I wore a blazer was to the Hayward College Ball in 2017. The closest I’ve gotten to smoking a cigar is trying a ten dollar disposable vape out the back of The Bog. I don’t really understand what liqueur is, and I certainly don’t drink it. According to my recently purchased collection of ‘80s Playboys, I’m not very good at being a man.

Back in the early ‘80s, a 300-page Playboy would cost you USD$3, or about NZD$10.00 when you consider inflation and exchange rates. Fortunately, Galaxy Books keeps a collection of these dusty old tomes, and you can own one for the criminally low price of $5.00 plus one incredibly awkward interaction. I bought four, ranging from 1981 to 1985.

Playboy has always been a mysterious thing of the past, like video stores, or landlines. To me, this was an exciting adventure into the forbidden unknown. Unfortunately, it turns out that old Playboys are actually just kinda shit.

I was born in 1998, so all the nudie mags got phased out well before I was of Playboy age. The only memory I have of raunchy magazines is seeing Zoo Weekly in The Warehouse when I was about 7. Naturally, I was under the assumption that Playboy was about breasts. I was expecting half the magazine to be portraits of ladies lacking clothes, and half the magazine to be about sex. This is a fairly reasonable assumption, considering every issue has a lewd woman posing on the front.

When I was a child, I remember my sister would collect Dolly magazines. There were all kinds of cheeky gossip and hot tips on kissing boys in those. I assumed Playboy would be just a kinkier version of that, except aimed towards adult men instead of teenage girls.

I have a theory - the reason there’s no exciting sex tips, no dating strategies, and no ways to spice up your love life, is because readers of Playboy assume they’re hot shit. Why would a classy man need to know how to better himself at sex? He is a classy man, and therefore an automatic sex god. To suggest he is anything less is an insult. I certainly wouldn’t pay $14 for two pages of incredibly lacklustre softcore pornography, but maybe Playboy had created this culture that the only classy way to consume porn is if it’s surrounded by articles about being a man.

I accepted my situation, and decided to dive in and try to enjoy some of this fine literature. My eye was caught by the 1982 November issue, which had a woman dressed up in mediocre Charlie Chaplin cosplay. It featured a bold ‘SEX IN CINEMA’ heading on the cover. What I didn’t realise when purchasing this fine collection, was that two of these magazines were completely “water damaged”. I started peeling apart the pages to try and find the article about Sex in Cinema, but the deeper I got into the magazine, the crustier the pages became.

Continuing my crusty quest to find this article on Sex in Cinema, I made my way past the centrefold. From this point on all of the pages were fused together, impossible to pry apart without destroying the paper. Safe to say I was done with this Playboy.

The next Playboy in my stack (January 1985) featured some very interesting things. Firstly, I found an article in the sports section titled ‘Real Men Don’t Wear Mesh’. Playboy writer Dan Jenkins spends a page complaining about how he doesn’t like when American football players wear mesh shirts, because he doesn’t like being able to see through them. If he and his pals wore sweaty and uncomfortable football jerseys back in their day, then so could the youth. They’re not real men. Poor Dan.

Progressing through the magazine, I found a shocking article titled ‘The Playboy Guide to Girls’ Schools’. This fold-out table outlines the ideal college Playboy road trip in gross levels of detail. I really can’t figure out if this is satire. For men looking to get action at Alverno College, Playboy suggests you be slow and patient, as girls from this college are easily frightened. However, the suggested pickup line is “It won’t hurt. I promise.” I was baffled by this. I can’t tell if this is bad ‘80s man humour, or genuinely awful advice.

Some of the pickup strategies for other colleges are outright bizarre. If you find yourself at Pine Manor College, Playboy recommends that you “look like an investment banker”. Smith College apparently has “lots of feminists and lesbians”, and frankly I don't know if that’s meant to be a compliment or an insult.

Playboy had lost me. I came in expecting a lot more jerking and a lot less masculine circle jerking. Half the magazine is ads, and the other half isn’t worth reading. Despite what the 1981 Christmas special may lead you to believe, Playboy is not “the perfect stocking stuffer”.

It turns out old Playboys are all a bit shit. I feel less intelligent for having read these.