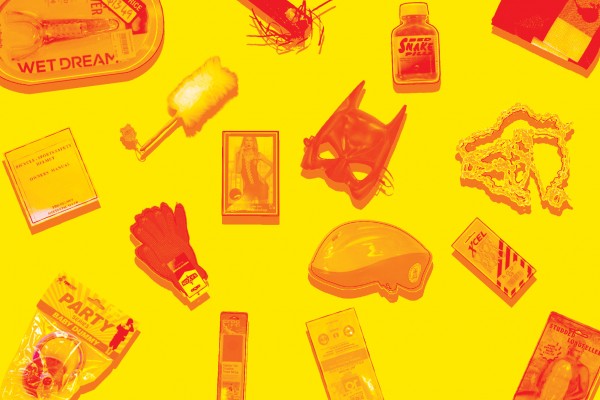 It’s hard out there to have yourself a good sexytime. Uni life is damn stressful, and sometimes it’s just so much easier to binge-watch hours of Kath & Kim before ending the night with a sad handy. But fear not! Chelle and Sinead took to the mean streets of the D to find the best sexual bargains, so that you don’t have to. Leaving no stone unturned in the quest to find Dunedin’s best sex store, we’ve got you covered for when your sex life has wanes harder than the art history department. Because there are only two “real” sex stores in Dunedin, we decided to widen our definition to include stores that have sex potential.

We arrived at Bunnings at a rather sexual hour – 1pm-ish. A (potential virgin whore) staff member greeted us at the door and gave us a lollipop from her tray. Something to suck on.

Unsure where to start, we decided upon a very sexual-sounding aisle proudly boasting “rope, chain, padlocks, gate hardware (what the shit is that?), tie-down straps and post supports”. We were in the right place. Selecting a very reasonably priced length of chain, we were faced with a conundrum – how to fasten it.

Chelle approached a man in an apron, named Pearce. “Sexually speaking,” she enquired confidently, “how could you fasten this chain?” Pearce rose to the challenge gracefully, providing a set of pin holds. “You just loop the chain around his wrists and push the pin through. It’s also very safe, as it’s fast to pull out if things go wrong.” Pearce seemed so sure this was gonna be heterosexual bondage. Cute.

We left with the following: chain and pins for bondage, a rubber tread for spanking, and a textured gardening glove for a thrilling handy.

Bang for your buck: 4/5 but gutted there were no sausages out front

Discretion of staff: 5/5 Pearce was the hero we didn’t know we needed

Creepy-old-man factor: 4/5 - many were milling about

How arousing the store was: 3/5

This store encompasses everything you’d rather forget about the late ‘80s / early ‘90s – it’s the epitome of a dodgy sex shop, from which all negative stereotypes about sex shops are founded. Calendars and DVDs featuring overly-tanned blondes with regrowth and perms plastered the walls. Their eyes followed us, begging to be freed. This store is an ode to sexism, misogyny, and “blokes” (if you’re into the concept of a “man cave,” you’ll feel right at home). The doorbell chimed for an inappropriately long amount of time. Upon seeing that the room behind the register had a TV and stacks of DVDs in it, the reason for the long doorbell chime seemed kinda creepy. The products were alarmingly dusty and pretty overpriced, but on the plus side there was a large selection of amyl nitrate, which is a great way to relax one’s sphincter and totally not at all a really fucking harmful thing to be inhaling. Kids – please do not inhale that shit :(

Being that neither the products nor the man running the place had been cleaned since the ‘90s, we only stayed long enough to purchase a “studded longfeller” (cock extension sleeve which, when said aloud, can only come out in a Bristol accent) and the dustiest ever bottle of novelty “Bed Snake Pills” which encourage you to hit your husband in the dick when he is feeling randy. We left feeling dirty and confused.

Bang for your buck: 1/5 novelty items only tbh

On the polar opposite end of the creepy scale, Peaches & Cream was brightly lit, with a really nice female staff member. Because we are rude, we didn’t even ask her name, and for that we are sorry. She was really happy to talk about flavoured lubes (which you can put on ice-cream - run don’t walk) and we chatted about the general stigma of sex shops, which she is working so tirelessly to combat. The products were very clean and modern; not a hint of the 1990s was anywhere to be seen (unless you count Chelle). There was a bargain table that had really good reductions, which we immediately pounced on, managing to score ourselves a Wet Dream Deep Diver Tongue Vibe, which actually sounds like the best thing to ever put near your junk, yet looks kinda like a rocketship (“Is that a potato peeler?” - Critic Illustrator Asia). We snagged a sachet of silicone-based lube to take the edge off.

One downside is that there was no music playing – you could hear a pin drop, a heartbeat quicken or a sharp intake of aroused breath. Too quiet.

Bang for your buck: 3/5 - great sale bargains, but full prices are somewhat intimidating for mere students

Lighting: fluorescent, but not in a super bad way. 2/5

How arousing the store was: 3/5

This crowded store is jammed to the hilt with things that are killing our oceans. Still, the thought of a bargain got us pretty aroused. With aisles so crammed with merchandise, browsing could be done with leisure and minimal interruptions. As a bonus, the radio station was cranking out the bangers, and the volume was great. Upon walking in, Chelle immediately seized a $12 rubber Donald Trump mask. “We don’t kink-shame here at Critic,” she declared, putting it on immediately. We were to find so much more than we had ever hoped for. It was the looting of a lifetime, and our $15 scored a flogger, a sexy fishnet dress, a Batman mask, and a large adult pacifier (like we said, we don’t kink-shame).

Hands-down the best bang for your buck, and they have a fine selection of “spice grinders” if you ever need to get Josh Smythe a last-minute gift.

Lighting: fluorescent but it is a cheap importer clearance store so cut them some slack 2/5

Discretion of staff: “there were staff?”/5

How arousing the store was: 4/5 - so many costumes; so many role play opportunities

General decor: 2/5 anxiously crowded, and far too much plastic

We decided to take a sexy chance on the souvenir shop, even with the risk that nothing in there would cost less than $15, given that they sell mainly to tourists.
Chelle immediately pounced on a table full of souvenir tea towels for $5 each. “Iconic Dunedin jizz rags!” (For the patriotic masturbators). After a long conversation about whether Manuka Honey would be appropriate lubricant (we couldn’t afford it anyway, but Sinead was adamant), we spied some $10 soft wool fleece dusters. They felt soft and sensual, perfect for boring couples looking to have some slightly-less vanilla sex to spice up their marriage. Chelle also brought one for a cat toy because she felt bad for Mike, the kind salesperson (who was beginning to get a little too attached because she complimented him a couple of times).

Bang for your buck: 4/5 - Surprisingly good for a store that should really be aiming to rip off tourists a little more

Discretion of staff: 5/5 Mike was a gentleman

Creepy-old-man factor: 1/5 but he did get quite attached

How arousing the store was: -3/5 just too many rows of honey

150th Anniversary Store in the Link

This store has an extremely limited selection of sex toys, and it was very hard to find any that didn’t boast a proud 150-year history. Sinead made the call that we could blow the budget by $5 to invest in a bicycle helmet, because where kink is concerned, Critic believes in a “safety first” policy. The staff were very surprised that we wanted to outright buy the helmet instead of “just renting it,” and when we told them that they weren’t a very good sex store they got awkward, and a little defensive and salty. Other than that, they were nice and there were no dirty old men watching porn on DVDs out back (a really uplifting factor).

Bang for your buck: 1/5 - aside from the odd pen or fridge magnet, everything else costs like, $80. Who is their target demographic? We can’t even afford to sway from the $2 pie selection

The Rankings, from worst to best: