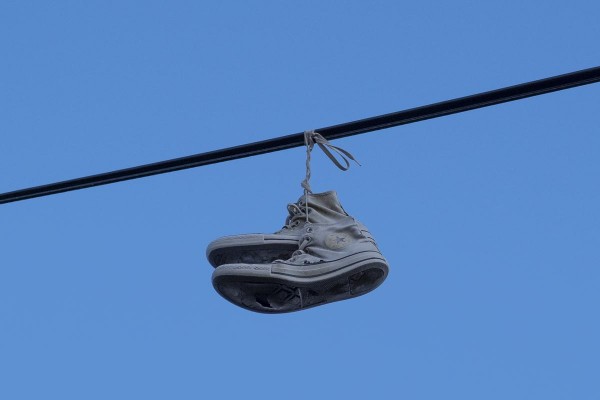 Can You Buy Drugs From Houses With Shoes on the Powerline? A Critic Investigation

North Dunedin is full of students again, and the stocks of almost-legal substances are getting low. This Critic reporter went on the hunt for drugs using one of the oldest methods in the book. The powerline method.

For those unfamiliar with this method, it stems from the urban legend that when there is a pair of shoes hung over a powerline, the house in front of it sells drugs. I grew up in Dunedin and I remember that the legend came with the assertion that the house was a meth den. But, the global financial crisis has hit since those golden days, and after all it is in every business owner’s interest to diversify. Even if a house I approached had a flek of chronic I would consider it a success.

A young fresher-looking girl answered the door and I introduced myself as Critic. Her flatmate popped their head around the corner as soon as I said the word “drugs,” but neither of them could sell me any. Guttered.

A construction worker out the front convinced me that the people who lived in the flat “never answer the front door,” so I awkwardly trespassed between two properties to find a trio of students lying on couches. They seemed rightly weirded out that I just appeared out of nowhere, but chilled out when I said I was Critic. Unfortunately none of them had drugs, either.

I saw someone leaving their flat with their refill pad in tow. I called out to him, introduced myself, and asked if he sold drugs. With a grin he said “ask him, aye,” and pointed to a flatmate inside the house. His flatmate passionately denied that he did anything of the sort.

I knocked on the door and was met with an enthusiastic “door’s unlocked!” I think I saw both her and her mate shit themselves a little when they realised they had let in a complete stranger. They admitted that they had heard about the “shoes-on-the-powerline” method of buying drugs. One of them said that they weren’t dealers, but then changed their minds, remembering, “oh! I think [our other flatmate’s] brother sells pills sometimes. Does that count?” Close enough.

The rest of the flats were Uni Flats. Only one of the students spoken to knew what this method of procuring drugs was, and they were a Kiwi Host. Critic presumes this is because throwing-shoes-over-a-powerline is a product of unique kiwi ingenuity. The poor uncultured exchange students spoken to were extremely concerned when I asked if they sold drugs. One of them outright asked me “would you get me in trouble if I said yes?” which would have been an incredibly suspicious thing to say, if it wasn’t for the fact that she sounded genuinely on edge that a total stranger was soliciting her.

All in all, it turns out that the powerline method is an incredibly shit way to buy drugs.

To anyone reading this who lives in a flat I approached and lied about not selling drugs because you presumed I was a mufti campus watch officer: definitely do not message Critic and tell us you secretly suss. We would be absolutely uninterested in discovering new places to score.