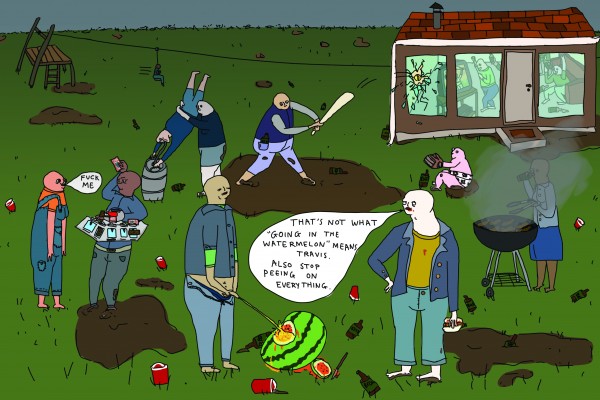 Law Camp. Last year, this post-admission honeymoon retreat for two hundred thrusting second year law students was exposed to be a weekend not of whispering “I do law…” into one another’s ears, but rather a weekend of nudity, aggressive drinking, and grand-slam jelly wrestling. It was reported that some had felt pressured to participate, but ultimately it was the New Zealand media’s fiery love of salacious scandal mixed with the heat of #MeToo, and the exposing of sexual harassment at Russel McVeagh, which led to last year’s event being canned. But while 2018’s Law Camp cancellation blue-balled a whole year of legal yuppies, Law Camp 2019 is on. So what happened to Law Camp? When did it start? Was it always like this? In order to answer these questions we’ve dug deep into the archives of Law Camps past.

1992. Cartoon Network was established, and a hot bunch of OULSA (Otago University Law Students’ Association, now named SOULS, presumably because it makes an actual word) students planned a weekend away for about 150 second years, and “one brave baby”. Whether they were an actual baby, someone under the age of 18, or just a fresher, it’s not clear, but it was reported that they didn’t mind being handed from student to student.

The camp began at the Captain Cook Tavern but eventually made its way to Orokonui where games of softball, bullrush, and scrag were held, while others bumbled along a confidence course. Although many engaged in recreation and roughhousing, some double-booked punters made their way inside to watch Pakistan win their first Cricket World Cup. In the evening there was a communal barbecue, with drinking to help people socialise. Although some were hosed in their beds, with the prankster sentenced to cleaning toilets the next day, the camp was apparently a howling success.

The following year the camp was brought back with more rugby, volleyball and relay races held in knee-deep mud. A “60km/hr” flying fox was available for riders to cheat death on. While some went on nature walks, others smashed windows. Maybe the first hint of questionable behaviour to come.

Professor Mark Henaghan told Critic that Law Camp “was, as all the best initiatives are at Otago, set up and run by law students. It was based on the idea that as Otago is a very collegial place and as the Law Faculty was the only faculty in New Zealand where students did second year law and nothing else, it would be good for them to have a camp where they got to know each other, build relationships and friendships as they were to stay together for the whole academic year”.

Law Camp 1995 had more sports, kegs, mud, and some students “going in the water melon” which I think is ye olde for oral. The successful marriage proposal to Marie Riddell, whoever that might be, made Law Camp history. Also, Travis peed on someone.

The archives on the fifth Law Camp held in 1996 are thin. I was able to track down a former law student who went to the camp, but she wasn’t willing to share details. Her cited reasons were that (a) you had to be there and (b) it was a ‘90s kid thing and being born in 1999 wasn’t going to make the threshold. By this we can expect the camp involved Yu-Gi-Oh card trading, a tsunami of denim, and a laugh track being played after every law pun.

Law Camp shifted from Orokonui to Pleasant Valley Holiday Camp in 1998. The second-year representative for SOULS who was elected at that year’s Law Camp said that camp involved “alcohol, sport, alcohol, food, alcohol, games, and of course alcohol”. The second year rep said that after camp “classes and reality greeted us on Monday morning, but this time there was a new gleam to the class”.

Following the success of the ‘90s, Law Camp strode into the new millennium with one particular heroine, Miss Natural Justice — the result of a beauty pageant and the crowning of one volunteering lad with a passion for female fashion. The earliest sighting of this rare and powerful figure in Law Camp mythology is 2004, with the tradition continuing until 2017 where it may have catalysed the media’s understanding of our University’s problem with nudity. But, as one 2017 Law Camp attendee said, “it was effectively a big strip tease that was absolutely consensual [male students chose to strip naked]”. Of course, they would say that as law students are pretty good at covering their butts, although not in this instance obviously.

Throughout the 2000s, Law Camp continued to be an event where law students got drunk and made a fool of themselves – oh sorry, bonded and cultivated collegiality. At some point, select students became woke enough to question whether the camp’s bizarre drunken activities, striptease and sexual skit show were actually okay.

A 2012 attendant spoke to the New Zealand Herald in 2018 and said the camp involved “a lot of social pressure”. The 2012 Law Camp reportedly involved groups picking girls to jelly wrestle. Jelly wrestling has been banned from the 2019 event. Critic has seen a photograph of said jelly wrestling and it basically just involved a small paddling pool with two clothed people wrestling it out. So probably a bit of lost context from the media. But, media reports last year also revealed that the 2017 Law Camp had garnered complaints from parents due to the talent show — where senior and second year students came up with skits involving nudity.

While some parents were shocked, one student who enjoyed that year’s camp said, “you knew going to law camp exactly what it was going to be. Your money was spent on kegs and food, you’d have to be fucking dumb not to know that”. He also stated that the Law Camp wasn’t as messy as he thought it was going to be.

Over the years, Law Camp evolved its traditions and activities, and also its logistics — particularly under the rule of Professor Henaghan. Off-duty Campus Watch staff were organised to be present, and a professional chef was brought in to cater and cook — which had previously been done by the students. The introduction of a bar manager saw to management of evening drinking, restricting drinks to beer and “a low alcohol form of RTD formula”.

Whether those booze rules weighed heavily on those attending is unlikely, as reports of morning hangovers being shaken with a vodka shot are plentiful. “There was concern at the time that there had been some drinking held during the day,” said Professor Henaghan, and so the introduction of the camp’s community service aspect was brought in to curtail that unwanted drinking. For at least ten years, students have painted buildings, crafted poppies for ANZAC day, cleaned roads, and helped the elderly, and in 2018 the Oamaru Heritage Trust wrote to the Otago Daily Times expressing their sadness with Law Camp’s cancellation, citing the benefit students had provided to the community.

According to Professor Henaghan, recent camps have had a Health and Safety plan, with the 2018 one being submitted to and signed off by the Proctor. Supposedly the Vice Chancellor had also approved the 2018 camp before it got cut.

Law Camp came under scrutiny at a time of monumental change and inspection of behaviour in the Law profession. The University’s independent report found nothing criminal about Law Camp, but it was only based on interviews with five students and one parent, something SOULS criticised at the time. SOULS conducted its own review which received 235 responses, most of which were “overwhelmingly positive” according to 2018 SOULS President Tim Austen. But, SOULS’ review process had its own flaws as it was conducted via a Google Form that was open to unlimited responses and did not require proof of law student status.

Many law students have reported Law Camp to be about friendship and increasing student participation. Others have said alcohol and nudity got in the way of those lofty goals.

Law is back for 2019, with more restrictions and a secret location so that media don’t try and sneak in. It has been part of every Otago Law graduate’s experience for the past 25 years and may very well be part of that experience for the next 25.