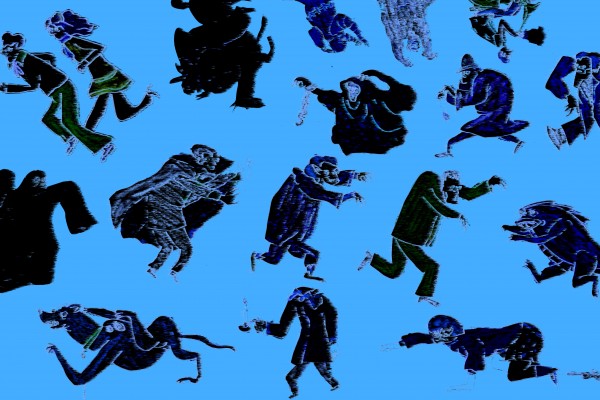 Scooby Dooooo.....n't Make Me Watch Any More Of These

I watched all 41 episodes of Scooby Doo, Where Are You? in four days. Last night, I dressed up in a white sheet with two holes for eyes and skulked around my flat roof going “Oooooo”. This morning, I was diagnosed villainously insane by a local psychiatrist. I have no memory of these events. Before I hatch a dastardly plan, let me impart my knowledge

If I’ve learned anything from watching 41 episodes of Scooby Doo it’s that the Scooby Doo gang do the same. Fucking. Thing. Every. Fucking. Episode. If like me (until last week), you haven’t seen a Scooby Doo episode in a decade, let me walk you through the basic plot for 99% of these 20-minute brain zappers.

First, the gang gets stranded or lost somewhere and meet a creepy local who tells a story about a monster or ghost. They then encounter the monster or ghost (a lot of horizontal panning shots of Shaggy and Scooby running back and forth ensue), set a trap for said creature, and the trap fails but the creature still gets caught. Guess what, it was actually the local from the beginning, the only other character in the story, all along!

Not sure why that blew my mind as a kid, but it did. Still, of these 41 episodes, there are some gems. Here they are, the top ten episodes of the original Scooby Doo series, according to yours truly:

It’s not what’s in this episode that makes it so great. The Tar Monster is relatively scary (think walking ball of diarrhea with one green eye), and there are a bunch of angry-looking Turks walking around, but the wildest thing about it is, the gang is in Turkey. Like, the country. And…. they drove the Mystery Machine there. That means a cross-continental journey, likely from France, clocking in over 3,000 kilometers. Through Soviet-bloc countries like Croatia, Bosnia, Serbia, Bulgaria, all during the height of the Cold War (seeing as the series takes places in the 1970s). How many Soviet roadblocks do you think they had to run, with Shaggy firing an AK47 while Velma lobbed hand grenades from the roof? Also the plot of this episode is essentially that an esteemed archaeologist (it’s never quite clear) invited a gang of stoned high school kids to drive to Turkey to be part of a legendary archaeological dig.

One of the original episodes, this one stuck in my heart as a kid because of the strange music that plays when the villain, a glowing guy in an old-school diving suit, shows up. Aside from a few strange inconsistencies (the gang goes to a beach party at night and brings an umbrella?) it’s a pretty tightly knit episode with two possible suspects, neither the actual villain, who turns out to be the live version of the dead guy whose ghost they thought was haunting them (?). Also we’ve got a wife who calls her dead husband “Captain”. Kinky.

You might think that Hassle in the Castle has the least scary Scooby Doo monster, but trust me, there’s way lamer than this ghost in a sheet (Episode 4’s monster is just an old hunchback with a grey beard). Still, some actual hijinks are involved, with the ghost seemingly able to pass through walls thanks to some unexplained trick involving mirrors (in this show you can do just about anything with mirrors). Also, the villain is someone we’ve never met before, a random magician called Bluestone. Still, to be fair there aren’t any other characters in this episode at all, so it makes sense that we don’t know the guy.

There’s a lot going on in this one. We’ve got multiple supporting characters showing up, which makes it hard to figure out who the villain is, and a rad chase scene where Shaggy rides a moped. There are also two different villains, a witch doctor and a ghostly Native American on horseback who rides around yelling. I’m still not sure how these two are related.

6. The Beast Is Awake at Bottomless Lake (Season 3 Episode 16)

This is the final episode of the original Scooby Doo series and it actually scared me a little bit (though this might be because I’d been awake for 20 hours by the time I watched it). The monster, a large fish with legs, runs like Usain Bolt and has big googly eyes. Yikes. Also, the villain behind the disguise ends up not being the bulky French lumberjack or the angry old fisherman, but a little blond girl named Julie, which definitely threw me.

Scooby Doo is set to inherit a massive fortune if he can stay the night in a haunted house, but all the other chaps competing for the fortune end up dead as the night progresses. One of the only original Scooby Doos to have people actually dying, this episode’s also notable for having four supporting characters. The two villains refer to themselves as the “Phantom Shadow” unironically, just like that weird kid who used to do anime runs down the hallway in Year 9. Oh wait … that was me.

Bringing in a bit of literary linkage here, Nowhere to Hyde also has one of the show’s scarier villains in the form of The Ghost of Mr Hyde, a green guy who laughs a lot and can climb buildings (no, it’s not mirrors this time). It’s also a relatively tricky case to figure out. Dr Jekyll, who the gang finds experimenting in a random basement, says he might be inadvertently turning into the ghost of someone his great-grandfather used to turn into, but then skillfully attempts to manipulate the gang into thinking it’s actually his maid, before it’s eventually revealed he’s just disguising himself as the ghost on purpose to rob jewellery stores. It must be said that his robbery strategy is absolute shite, as he laughs extremely loudly the whole time he robs places, tipping off every cop in a square kilometer radius.

The Mystery Inc. gang attend a hip barnyard dance, a bank manager robs his own bank, there’s a soundtracked chase scene, and the villain mutters his own name while walking around chasing everyone. Oh ... and there’s one of those sequences where somebody steps on a rake and it hits them in the face. Iconic.

It was tough for me to choose the top two, but I had to push the classic AGoGG to second slot; it is great though. It’s got three different monsters, Dracula, Frankenstein, and a werewolf, as well as a weird gypsy, and a creepy castle. Also, the classic line “Yes, and I'd have gotten away with it, too, if it wasn't for these blasted kids and their dog!" makes its first appearance in this episode.

Most of all, AGoGG has nostalgia value for me. I specifically remember watching this episode when I first ate candy, a bag of Skittles, at age four, on my parents’ bed. I also remember shitting my pants for some reason, not because I was scared, more so because I was four and wasn’t fully toilet trained at that point.

This is definitely the scariest episode of Scooby Doo. The opening scene with the headless guy walking around with a candle freaked me out when I watched it last night just as much as it did when I was a kid. It’s got hidden treasure, secret clues, and multiple villains (which rapidly decrease in scare factor): the headless spectre, a guy in overalls wearing a sheet, and a balloon under a sheet. Yep. A balloon under a sheet. The “clammy hands” line is also a classic (“Velma, you’ve sure got clammy hands!” “Shaggy, yours are even worse!” Surprise! It’s the headless spectre, who is holding both their hands. Except this makes no sense because he’s wearing white gloves).

Anyway. What the fuck, Scooby Doo?!