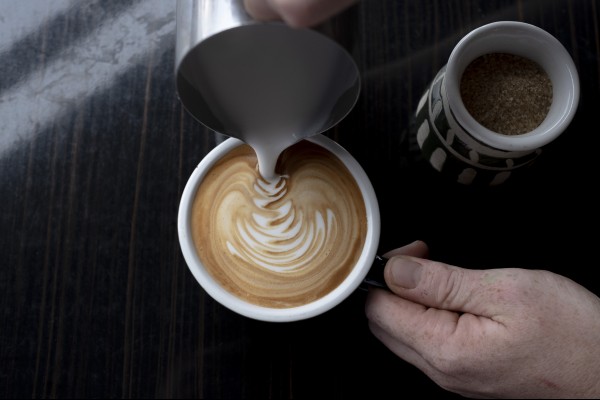 The Best Caffeine Hit on Campus

Bean juice, java, a cup of joe, the good stuff, espresso, café, a brew, COFFEE. I love it. You also love it, unless you’re a Mormon or one of those people who thinks caffeine is ‘bad for you’. I put myself on the line for coffee lovers and ordered flat whites at ten places on/near campus to find out who makes the best cuppa.

The name ‘Café Albany’ is promising. Is it a cute little bookshop café that you haven’t heard about? No, it’s the café in the Link with the massive blue sign that you have never read. And things don’t get better from that initial disappointment.

There’s nothing worse than ordering a coffee only to realise that you are stuck right next to Central Library, trapped under fluorescent lighting with students who are buying cheese rolls. I ordered a flat white, which took 11 minutes to make. They gave me a numbered receipt, which was weird, and even weirder because they never called out a number. When my triple shot coffee arrived, it was (somehow) a bit weak. The milk frothing was okay, no fun patterns (I took off the KeepCup lid to check), but it had the right silky texture. Overall, below average coffee in a remarkably shit location.

Just across the road from Café Albany, Dispensary is on another level. The coffee was strong and came quickly, like an attractive one night stand who turns out to be bad in bed. The caramel slice, while unrelated to coffee, was also amazing.

It’s somehow always sunny and warm in Dispensary. I feel far away from uni when I drink coffee there, like maybe I’m on holiday in Sydney rather than stuck at the bottom of the world. That illusion was ruined on this occasion when no less than four of my lecturers walked in and ordered coffee. Other than the disturbingly high percentage of Law Faculty members who frequent Dispensary, it is a genuinely nice café with good coffee.

Side note: Referring to Dispensary as “Dispense” is not cool. Please give Dispensary the respect it deserves and call it by its full name.

Strictly Coffee doesn’t really look like a café. I walk past the place every day and it took me six months to figure out that I could buy coffee there. They make coffee beans, maintain coffee machines, and sell every coffee-related implement you could think of. Which is to say, they know what they’re doing.

It’s worth building up the courage to get past the intimidating black reflective windows. There’s a red patterned feature wall, rock music is always playing, and the coffee is good. If Brendon Urie opened a coffee shop it would be Strictly Coffee. When I placed my order, I was on my way to a lecture and under time pressure. I walked out the door with a flat white in under two minutes. The milk was the perfect temperature, the coffee was rich and full-bodied, birds were singing, the sun came out from behind a cloud; I had found a good flat white and still managed to arrive at my lecture on time.

I know some people are still upset about the loss of Gardies. RIP. With that tribute out of the way, here is my controversial opinion: the Marsh is a good study centre and makes good coffee. Of all the uni-owned places that sell coffee, the Marsh was the best.

Coffees from the Marsh pulled me, kicking and screaming, through second year law. It was the first place that I took the leap and moved from mochas to real coffee. Back then, a regular coffee was $3. They have now increased in price to $3.70. Maybe nostalgia distorted my palate, but the flat white was an all-round decent coffee. The only qualms I had were that the milk was slightly too cool and the mixed study centre/café vibe was confusing. Could I tell a fun anecdote while drinking my coffee? Why was there pop music playing?

Going to St Dave’s and paying $5.40 for a triple shot flat white almost killed my love for coffee. Any coffee over $5 is outrageous, no matter how many shots there are. $5.40 is approaching captive-market airport pricing. I think the café is intended for the tourists who buy overpriced merch from the adjoining University shop.

The place started filling up with first year health science students the moment my flat white arrived at the table. I was trapped, listening to health scis talking about how stressed they were after one week of lectures. The flat white did not take the edge off. It was hardly even worth it for the caffeine hit. The milk was bubbly, the coffee tasted over-extracted, and I had to force myself to finish the cup. Nicki Minaj’s Super Bass played, a jarring background track to my disappointment. The real Saint David, patron saint of Wales, would cry with disgust if he knew about this sorry excuse for a café.

Fluid sits in a similar price range to St Dave’s at $4.50 for a regular coffee (i.e. about a dollar too expensive). Unlike St Dave’s, Fluid’s coffee is drinkable. I walked in around lunchtime and joined a queue of students to order my flat white.

A while after ordering, I watched people who were behind me in the queue receiving their coffees and slowly realised that they had forgotten to call out my order. By the time that I received my coffee, it had been sitting on the counter for five minutes. I assume that the flat white was made at a good temperature, but it had since cooled down and the milk texture had gone a bit foamy. The regular coffee was quite small considering the $4.50 price tag. Overall, Fluid made a good coffee, but the service was not great.

The Good Earth is a lovely spot to catch up with friends. The courtyard is pretty, the jars of preserved fruit create a homey vibe, there are live plants on all the tables, and the windows facing the street are perfect for people watching. But the coffee is shit.

My coffee was on the borderline between a latte and a cappuccino, but the steamed milk didn’t even begin to resemble the silky texture of the flat white I had ordered. It felt gritty in my mouth. Every coffee I’ve had from The Good Earth has had a dirty aftertaste, like they’re making it from mud. Maybe I just have a problem with the organic beans they use, but possibly the coffee at The Good Earth is just bad. I have bought many coffees here, and every time I have regretted it.

Te Mātiti is new, located on the bottom floor of the renovated Business School building. I expected my flat white to be comparable to St Dave’s. It was significantly better. Basically, it was the same good-but-not-impressive level as coffee from the Marsh, with the downside of being surrounded by BCom students.

When I heard that Veggie Boys sold coffee, my only thought was: why? Nothing that I experienced in the store answered that question. I walked straight up to the counter and the staff members were, understandably, putting out vegetables and fruit and chatting to a customer about the price of pineapples. I stood at the counter for an awkward ten seconds, eyes on the Vibiemme coffee machine, and no one noticed me. So I panicked, picked up a bag of capsicums and put them down on the counter with my KeepCup. (My panic buy was actually pretty good: $5 for 7 capsicums.) A woman came over and took my order, then started to make the coffee. There’s no designated barista; whoever takes your order will have a go on the coffee machine.

The coffee was exceptionally bad. My hopes, which had been raised by the sight of the Vibiemme coffee machine, were dashed by the sound of squealing milk. My coffee was lukewarm. I ordered a flat white but I received an ambiguous white coffee with lots of uneven foam. The espresso was over-extracted and bitter. The upside: this coffee, whatever it was, only cost $2. However bad the coffee is, Veggie Boys are aggressively undercutting the competition.

Tucked away behind the Archway lecture theatres, the little yellow Hussey & Laredo caravan is one of the happiest sights on campus. I walked up to the caravan on a Friday afternoon, successfully avoiding the queues by ordering my flat white late in the day. They took about two minutes to make my coffee and honestly it was perfect.

The milk was creamy and had the glossy texture of a proper flat white. I’d ordered a large coffee, and the ratio of milk to espresso was perfect. The milk was hot, they gave me a discount for bringing a reusable coffee cup, and the truck was in a convenient location. I have no criticisms. Bonus points for also selling bagels.