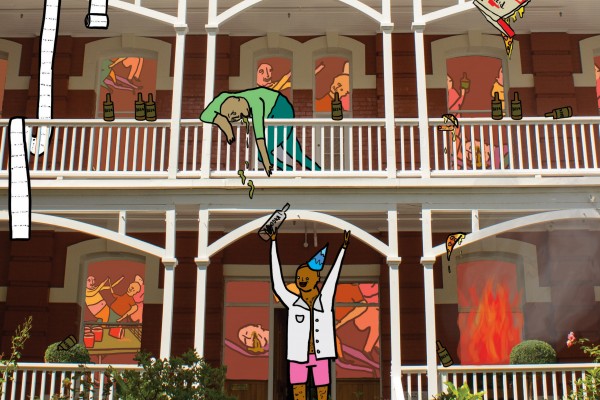 Which Hall Has the Loosest Drinking Rules: A Critic Investigation

Residential colleges: the places where you made your first adult friend, both got and gave your first disappointing oral sex, and then stopped talking to said adult friend, leading to many many awkward hallway interactions.

They’re also the places where most students have their first experiences legally consuming alcohol as adult members of society.

Pretty much all the halls are owned (or part owned) by the University, yet their drinking rules vary widely. So that you can make an informed choice about where to go when you’re kicked out of UniCol for disrespecting toast time (it happens), Critic spent a death-defying afternoon ranking the halls from prohibition-esque dictatorships to offshore booze-havens.

The main factors we took into consideration were: the types and amount of alcohol allowed and how late you can drink before being kicked out to sip from a wine bottle in a paper bag on a park bench in the cold and the rain.

The award for the most restrictive drinking rules was close, but in the end Aquinas claimed the title, with the impressive restriction of four RTD cans or six 330ml bottles/cans of beer or one bottle of wine or cider. Spirits are banned, as are beers above 6%.

However, Aquinas is one of the few colleges that doesn’t have any restrictions on what times you can drink. We decided to give it the last place anyway because it doesn’t really matter what time you’re allowed to drink if you’re not allowed to drink anything.

Toroa’s rules are basically the same as Aquinas’s, except they allow two more RTD cans per person. They also ban gatherings of more than ten people, presumably in case they organise a militia

Cumberland and UniCol’s rules are almost identical. They both allow 12 beers/6 RTDs/1 bottle of wine or cider. Neither allows spirits. Cumberland kicks you out at 9.30pm, and UniCol at either 9pm or 10pm, depending on the day of the week and, presumably, how much of a headache the warden has.

The biggest difference between the two is that, in an intriguing contradiction, while UniCol specifies that wine and cider is “not to be consumed directly from the bottle,” Cumberland’s rule is that “Wine is to be in bottles only”.

One of the interesting things about all the halls’ alcohol rules is how vague they are. For example, all the alcohol types allowed are either/or, meaning that you can’t have, say, one can of beer and one cruiser, despite that barely being enough alcohol to make a fly spin in circles.

In a fit of rampant liberalism, Te Rangi breaks with the separation of beer and RTDs and just says that you can have 12 of either, as well as single bottle of wine and no spirits. They also won’t kick you out till 10.15pm.

Arana is where the playing field really starts to loosen, with residents being allowed a reasonable 2 bottles of wine, alongside 12 RTDs or beers.

They will, however, make you leave at 9pm. Although surely being made to leave Arana is more of a reward than a punishment #fuckarana. (Is that still funny? I don’t know. It’s been a long time since first year.)

Knox’s alcohol rules are a bit more complicated than those of the average college, presumably to account for “tradition”.

The Knox rules are full of sentences like “Occupants of Double-A lounges may seek an exemption to this rule on Saturday nights. Exemptions may be granted at the discretion of the Duty Sub-Master”. As far as Critic could tell, this rule pretty much means that residents can drink as late as they like if they’re able to bribe management.

Knox residents are allowed 2 bottles of wine/12 beers or RTDs. Again, no spirits.

Both of these colleges have no restrictions on how much alcohol you can have as long as it’s not a high percentage alcohol, although Salmond bans “alcohol in glass bottles (except wine),” so presumably if you take a spirit and put it in a plastic bottle you’ll be all good.

Both of these colleges will kick you out at 9.30pm.

Hayward just edges out Salmond and Caroline Freeman, with a kick-out time of 10pm, but otherwise is pretty much the same.

Selwyn doesn’t put a specific limit on how much you’re allowed, but instead allows “A limited amount of beer, wine and RTD’s [sic].” Critic’s assuming that “a limited amount” really means “don’t stockpile alcohol and then on-sell it as a cheaper alternative to petrol, undermining New Zealand’s fuel prices and crashing the economy”. A very reasonable rule, all things considered.

Spirits are banned, but you are allowed to drink as late as you want without being kicked out.

We’re down to the final three.

While Studholme does have restrictions on how much alcohol you can have, those limits are pretty high, and they are the first college on the list to allow spirits. At Studholme you’re allowed 15 standard bottles or a box of 15 cans, or 2 bottles of wine or one bottle of spirits.

They will kick you out at 10pm.

In second place, the partying institution itself:

Carrington has no specific restrictions on any type of alcohol, including spirits, and won’t kick you out until a very respectable 10.30pm.

Critic’s pretty sure Carrington only gets away with this because the Health Scis don’t have time to read the college rules, as they are too occupied trying to stuff textbooks through their ears.

It also could just be that most of them get their kicks from Ritalin and dreaming of one day being able to stick their hands inside another person’s abdomen and give their internal organs a loving squeeze (we’re pretty sure this is the only reason anyone becomes a doctor).

And finally, far out in front, the highly coveted title of the Loosest Hall in Dunedin, goes to that bastion of alcoholism, the hall renowned for its off-the-rails hardcore frothers.

St Marg’s effectively has no hard and fast drinking rules. Instead, their handbook says, “Intoxication itself is not seen as a matter for discipline, though it may be a matter for education or pastoral care”.

There are no restrictions on the amount or type of alcohol you can possess or consume at St Marg’s. There are also no rules about when you can drink. They do ban more than four people being in a room together, but let’s be honest, if you go to St Marg’s it’s unlikely you know four people to begin with.

When we get around to it (read: never) Critic will present St Marg’s a certificate, or maybe a small engraved trophy, to commemorate their unwavering opposition to tyranny.

Critic couldn’t find any mention of Abbey College having any drinking regulations, maybe because postgrads have grown up and realised that staying in, making a nice cup of tea, and having a wank to Downton Abbey is way more fun than vomiting into a rubbish bin on George Street.