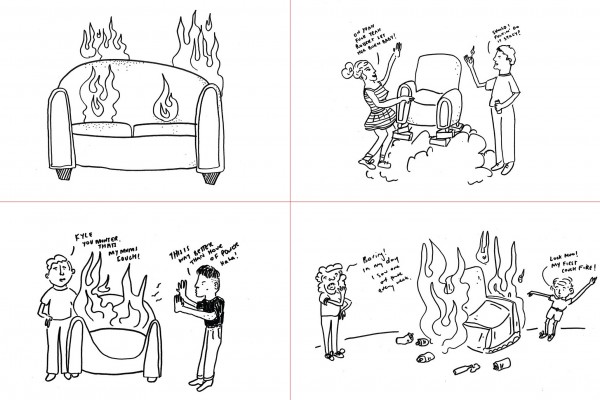 The Eternal Flame of Couch Burning

When I envision how couch burning started in this glorious city we call home, a couple of scenarios go through my mind. Maybe our young hero who, sick of having flat arguments about heat pump usage, had a fit of rage and decided to burn the living room furniture as if to say “Fuck you ya cheap bastards! You take my heat pump remote? I’ll take your couch. Quid pro quo, bitch.” Perhaps the tradition started as a comment on modern society. The couch represents the family unit and thus to burn it is to reject family values and revel in glorious chaos. My favourite theory is that it was an accident, but everyone kind of just went with it. Like “Oh, our sofa is on fire? That’s cool, that was intentional”. Which is basically the story of how I ended up in tertiary education.

Critic delved deep into the ashes of this scarfie tradition; why, when and how it started. This investigation actually required more than a quick Google search, much to my chagrin. I’ve got assignments due and self-respect; I don’t have time to go to the Hocken library. Old people creep me out. So, Critic enlisted the help of Senior Station Officer Rob Torrance to delve into the smoky history of couch burning. What can I say? I’d take a rugged firefighter over a judgmental librarian any day. Unless it’s a sexy librarian with a book tattoo in a naughty place. Then I’m listening. 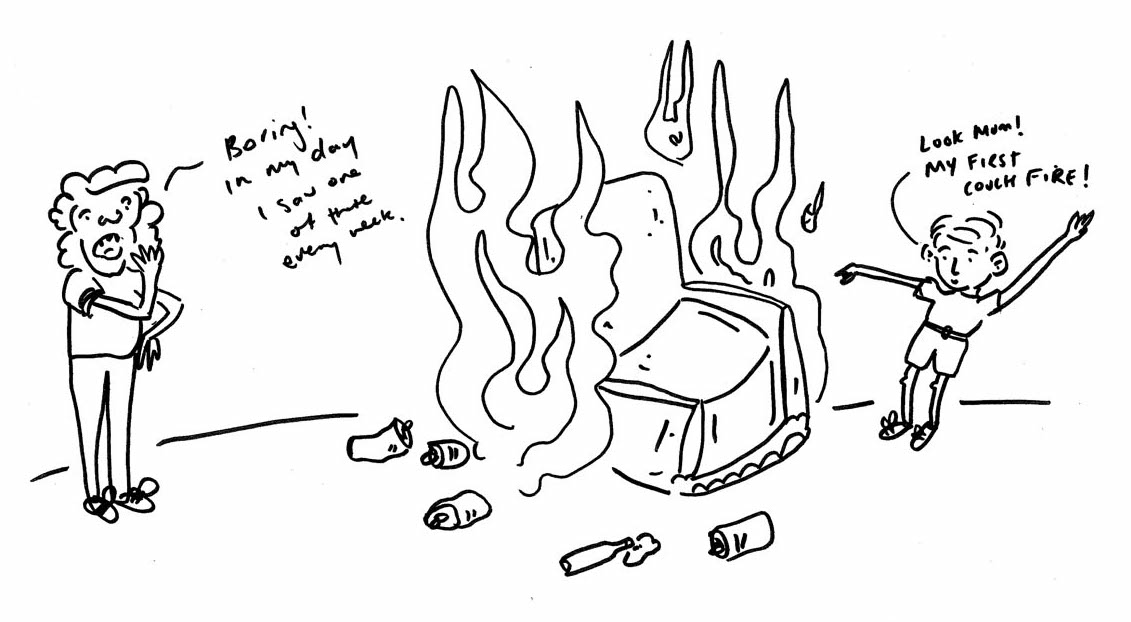 It’s hard to determine exactly when couch burnings started. Rob said the history of student burnings went back to around 1864 “Lots of students were burning their furniture at the end of the semester, after the last exams, and that’s where I guess it started. They were just bonfires, they’d chuck on whatever they could find”. This begs the question, however, of when the sultry, sexy couch became a hot topic. The classic two-seater typically throbs for your sweet ass cheeks, not the lick of gasoline.

Things started to become more couch-related in the early 1990s, although it still wasn’t that bad. “We had about 64 couch fires a year, it was nothing, just the odd one or two, all clean fun. You’d get the hose from the back yard and put it out, it was a bit of a joke. Often you’d get four or five people dancing around the fire.” 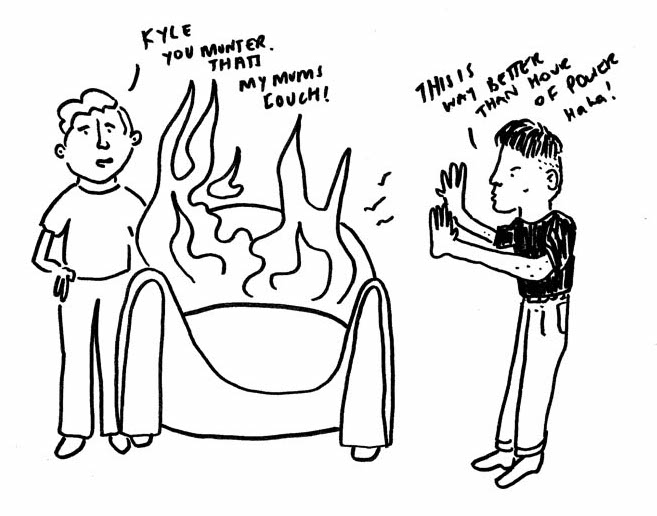 In 1999, the legal purchasing age for alcohol was lowered from 20 to 18. Parents wept around the nation for the loss of childhood innocence. Sons and daughters collectively rejoiced, knees deep in God’s piss. However, just like skipping all your classes, sometimes there are consequences to actions, as Rob explains: “Couch burnings went from 64 to 360ish in about 6 months, and that’s discounting the Undie 500s and the Easter tournament. We didn’t bother counting them on those nights; just too many. So a bit of a trend started to develop on Thursday nights, the Willowbank station would probably go through about 20 couch burnings in a shift, and it would be all around the Castle Street, Howie Street student quarter.” I’m not good at maths, but that’s probably a lot. Couch burning even got so popular that student pub, The Bowler, held a promotion where the owner offered a litre of beer for a litre of petrol, with the chance to win a box of matches and a couch doused in petrol.

Brad Fitzgerald, a student back in 2001, remembers his time here fondly saying “our flat on Harbour Terrace was fully furnished but the beds and couches were shit, and we all had our own stuff, so we put everything including the couches in the backyard in January. But then when winter came along, we burnt it all.” However, Rob doesn’t seem to think that couch burning stemmed from students getting rid of rubbish, but rather “a bit of fun at the end of the year. There wasn’t enough stock in town, the second-hand places were importing second hand couches from Christchurch, they were in very high demand.” So clearly couch burning was more of an inconvenience to carry out rather than a convenience. If you wanted to get rid of a couch, you could probably just sell it and actually get some money. To burn a couch however, is for the sake of the burning; the intoxication of the smoke, the orgy of flames and bodies. There’s nothing else like it. It’s like your first time doing anal - it’s a bit messy, your parents will be ashamed of you, but you’ll never forget it. Another ex-student recalled his experience, saying, “It was just a bit of banter, everyone was doing it. It wasn’t a proper party if you didn’t burn a couch or two. People fucking frothed it man, they danced around it and took their clothes off and shit. No one got hurt.” 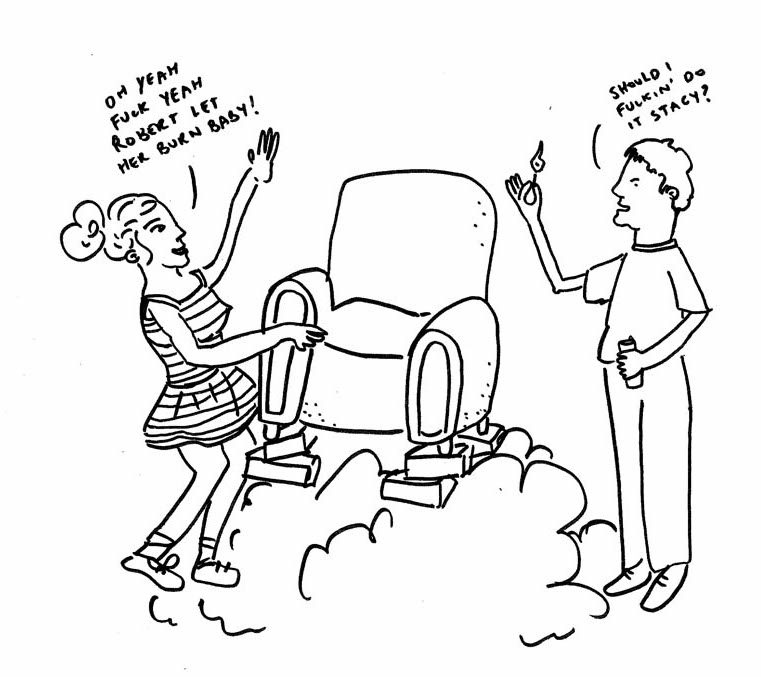 This trend continued for the next few years, but according to Rob “it got a bit nasty sometimes, they started putting aerosol cans into the couches which when they get a bit hot they blow up, and you get a 10 or 20 metre fireball.” Not only that, but the very nature of the couches that students burned started to evolve: “They started out with the horse hair couches which were not made up of a lot of petrol at all. However the foam mattresses type stuff that they put into the later ones, you’re talking about 25 litres of petrol for a 2 seat couch, so they became quite hard to put out with a hose and one tank, so we started mixing foam with the stuff to put them out.”

In 2013, the glorious big-titty powerhouse we like to call the Dunedin City Council (DCC) stepped in. Oh baby. Previously, residents were allowed to burn rubbish in their backyard if the fire was more than 50m from any boundary and the smoke wasn’t a nuisance to neighbors, and so the classic garden bonfires continued to sizzle. The DCC imposed an air plan that banned this burning, and started monitoring outdoor burning more closely - which could result in $300 fines if breached. Classic local government intervention stuff, fuck it turns me on.

Shockingly, the DCC’s intervention only made the problem worse. Robb said students moved couch burnings from their backyard and instead “started putting them out into the middle of the road. I guess some smart student from the law department figured out there was no jurisdiction, they couldn’t give you a fine because they didn’t know what the address was.” Turns out law students are useful for something after all.

Thus forms the picture-perfect scene of the classic couch burn in the middle of Castle Street. Robb even says that “at one stage the university was even advertising on television, like for Auckland, you’d get an advertisement for Otago University and you’d have a couch burning with guys jumping over it. It was a bit of a traction thing, everyone came down for the fun.” Couch burning became a Dunedin sensation of come for the fun, stay for the, well fuck, I don’t know. Why are any of you fuckers still here? Go home.

Technically, there have been zero fatalities from couch burning, so that’s something. More people have died in Dunedin from sex toy related deaths than couch burnings. There have however, been a “few injuries, some properties have been singed quite badly, with the verandahs that the couches sit on.” Fire is hot and dangerous, like your mum in a thong. Rob, being the sensible but smouldering firefighter that he is, doesn’t wish to officially endorse couch burning to student population: “Yeah don’t bother. Health wise; the smoke and the burnt materials that come off the new couches just are deadly, the plastic sticks to your throat and worst-case scenario you’ve got to take it off via surgery. It’s horrible, horrible stuff.” If you’re looking to burn something, perhaps just stick to a blunt. Or just burn those bridges with your toxic high school friends, you know they’re not healthy for you.

Earlier this year, Critic reported a 90% drop in couch burnings in 2017 compared to 2011 (264 incidents vs 24). While the odd one still rears its flaming head, they’re about as rare as a Young Nat with a girlfriend. Overall, the trend has declined, but why? Rob has a couple of theories: “Firstly, there’s been some injuries and accidents over the past few years and I think the student body has kind of woken up to that. There’s also been the Campus Watch that has been put in place, that’s definitely slowed it down a lot, that’s probably the biggest simple mover.” Not only that, but the University has cracked down on couch burning, with harsh punishments for those who dare to light the match. Thus, the once-loved pastime has fizzled out, succumbed to a slow death to settle amongst the archives of ODT slander. To all the couches I’ve loved before, thank you. You died a hero’s death. 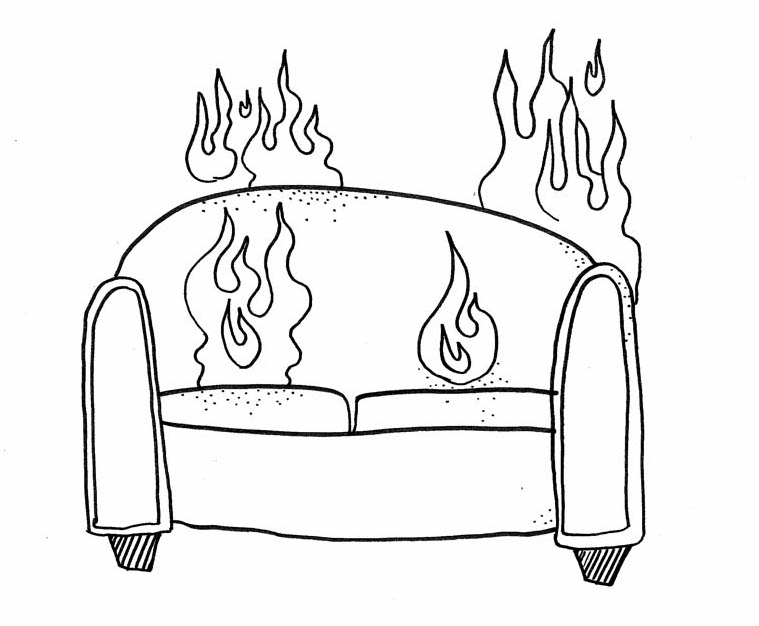