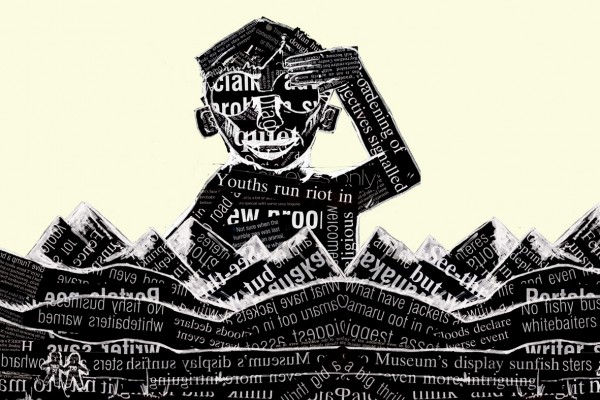 The History of the Critic/ODT Journalism Turf War

New Zealand is a small country. We’d fit in the pocket of a real country and be indistinguishable from lint. Our small population moulds our news outlets into unusual beasts. One of the most unusual is the Otago Daily Times, the hyper-local community newspaper that in the midst of the digital revolution still gets tons of print sales.

The Otago Daily Times was established in 1861 by W. H. Cutton and Sir Julius Vogel. Critic was founded in 1925 by some fuck who probably thought he was so cool. Part of Critic’s mission over the years has been to attack every conservative institution possible and the ODT is an easy target.

The ODT have done some significant reporting in their time. In 1889 the ODT reporter Silas Spragg (who’d just left his old job as a Dickens character) exposed sweat shop labour in the manufacturing sector, which led to significant law reforms. And they still do, Chris Morris’s recent ODT Insight series revealed historic paedophilia and abuse in Dunedin’s Catholic churches, covered up by Bishops over the years.

But the ODT also write about the weird and the inane. The cats stuck up trees and the albatrosses that happened to go near bus stops. They’re a community newspaper on steroids.

The wider Dunedin community has always had a complicated relationship with the University and the student body. On one hand they know that the University is the source of the city’s vitality – without it Dunedin would just be a slightly further north Invercargill – on the other the University sustains a large population of young people, pushing society’s boundaries, challenging the norms of the previous generations, and generally being annoying little shits. The ODT is similarly stuck between catering to the residents who want to crucify students for having a different lifestyle and wanting to tap into the 21,000 person student market.

Every once in a while the ODT decide they can do both and try to make a push to engage students. In 2006 the ODT launched an incredibly cringe promotional strategy targeted at students, the “ODT Girls”. The idea was that you would presumably want come talk to the “Girls” (why I’m not quite sure) and they would sell you ODT subscriptions. The ODT featured a large ad with pictures of the “Girls” and their slogan, “We’ll be there when you wake up in the morning”. ODT Watch for that week noted that “Here at Critic, we would never resort to such flagrant abuse of the female form”. Of course, the anonymous ODT Watch writer may have been being ironic considering that the cover of Critic for that week was a close up of a woman in a bikini with her head cropped off.

Critic has been printed by various different comapnies over the years, including the ODT. This inevitably led to conflict. In 1952 the ODT refused to print a Critic article titled “U.S. Germ Warfare in Korea?” because of its apparent “Communist point of view”.

However, the tradition of setting aside regular space in the magazine every week just to make fun of the ODT didn’t start until around 15 years ago. 2006 was the first year the column appeared under the name “ODT Watch”, but it wasn’t the first time a regular column attacking the ODT was published in Critic. In 2003, Hamish McKenzie, who recently left a job at Tesla where he was briefly “Elon Musk’s favourite boy” and is now running a journalism startup, started a column called Hard Copy! which attacked specific articles in the newspaper; every week Hamish would choose one article and pull it apart.

Here’s an excerpt from a Hard Copy! about bagpipers going deaf:

“Before you jump to any conclusions with this one, just stop and think a moment: how often do you actually hear bagpipe-related news stories? Hardly ever. That’s why you have to admire the audacity of the ODT - they’ve really gone out on a limb here. In another fine example of the newspaper-formerly-known-as-the-daily-newspaper-of-the-year’s [the ODT lost the title in 2003 to the Dominion Post] brilliant news-hunting ability, they have turned to a most unlikely source for inspiration: the famous Piper and Drummer magazine. It takes imagination of the most extraordinary measures to take a whimsical article from a UK-based  bagpipe-specific magazine and turn it into a hard news story suitable for the front page of a daily newspaper in New Zealand.”

Hamish said his aim with Hard Copy! was to “raise a point about some of the shortcomings of the paper while also celebrating its kind of community aspects, and local homeliness”.

Critic has often gone a step further than just attacking the ODT and called out the reporters behind it by name. Hamish pioneered this, ridiculing the writers of articles by name every article. “Baser is not simply a reporter; he is an artist,” ran one Hard Copy! Column.

In 2010 the ODT published an article by reporter John Lewis, which contained information that turned out to be false. Weeks later, in a stroke of genius, an anonymous ODT Watch writer decided to look into the assignments that John Lewis had been given after his article was taken down from the ODT website. Highlights included, “Columba College girl finishes third equal in essay competition,” “Small baby born… on Mother’s Day,” and “Come on everybody, get up out of your seat - Dunedin’s newest cheerleading squad will be a treat that can’t be beat”.

ODT Watch also got the attention of the ODT itself, “it was both a mark of triumph and shame to be the reporter whose work was singled out for that week,” said Hamish McKenzie.

One ex-ODT reporter said that back when he was at the ODT, "[ODT Watch] was appointment reading. Every week we'd get them delivered downstairs and they'd be brought up for everyone to read. They were often cut out and stuck on the wall or linked around the office."

"A few years ago they stopped doing bits of articles and just did headlines, which was less funny, but it's really sparked up in the past year or two." (We only included this quote to stroke our own egos.)

In 2007, a running joke in Critic was ODT reporter Hayden Meikle’s coverage of the World Cup. Meikle, instead of covering the games, mostly just wrote weird travel pieces about the French train system, or what it was like waiting in a line for 20 minutes. Critic awarded Meikle “Critic New Zealander of the Year,” writing that “In his ability to render the banal even more banal, it would not be an exaggeration to say that Hayden Meikle is the soul of the ODT”.

Hayden Meikle said on Twiter this year, “I actually had a very thin skin at the time when this was published. I’d been away from wife and kids for six weeks, and covering the World Cup on my own was draining. I was tired, and didn’t know why Critic was obsessed with me. But later grew very fond of that story, and have a copy still”.

In 2012 a news piece by Gregor Whyte titled “Sun Sets on the ODT’s News Section,” about the ODT putting the fact that the sun had risen on their front page, apparently got the ODT furious. One past Critic employee said that “apparently after we published it the manager in charge of the online edition stormed into the newsroom and had a bit of a rant about the quality of stories/how much they hated Critic. We had been lighting them up a lot that year though so it might well be true”.

When ODT Watch in its current form and name debuted in 2006, the content varied wildly from week to week. Some weeks were lengthy, some just a single image and some text, some were funny, some fell into the simple repetition of the ODT’s stories that was to become popular in certain later years.

In 2008, in the first issue of the year, possibly the weirdest incarnation of ODT Watch materialised briefly, for a single issue, then faded away into the wind. Called The Oddity, it presented a surreal other reality where the narrator talked about “the other reader, the other Oddity. I pretend that he has come to visit me and I show him my house”.

“In my dreams, everything makes sense, authorial biases are revealed, and every story is chosen not for its ability to fill space, but on it [sic] own merits. I dream, and I wake in tears.”

Hamish’s opinion on the ODT has changed over the intervening years. “I do think it does a good job of serving its community, and I don’t think every story in there has to be so serious and highbrow as perhaps once as a high minded student, who was a little bit uppity, I once felt.”

“It’s easy as students who haven’t had to live too much in the real world to just tear that shit down, without acknowledging that some difficult decisions have to be made, people’s feelings are actually being hurt along the way.”

However, there are issues with the ODT that perhaps deserve to be called out from time to time. The newspaper is shot through with small ‘slip-ups’ or awkward phrases that reveal a casual racism. A news article about a martial arts display at a primary school starting with the line, “A Dunedin school was taken over by Chinese yesterday - but only for the day.” Or allowing an opinion piece to run that had the line “You can take the New Zealander out of Christianity, but you cannot take Christianity out of the (true) New Zealander”. That’s the sort of high grade ethnic nationalism even Don Brash only snorts in the privacy of his own home. But then Allied Press did allow Brash’s toxic lobby group Hobson’s Pledge to advertise in the Duendin Star (the ODT’s sister publication).

The ODT got national attention last year when they published an opinion piece by Dave Witherow, who was very upset about some Māori being spoken on RNZ, and “inflicting it on the English-speaking majority”. He went on talk about how everything’s run by liberals “Caught in the toils of their self-assumed guilt, their lives are one long grovel. We must respect the native culture, they will ooze. We must respect te reo.”

It’s also the little things that build up, like not putting macrons in their proper place above Māori words. Putting in macrons is an easy thing to do (even Critic does it – the bar can’t get much lower than that), and it’s actually kind of important to respect an official language of New Zealand.

And don’t get me started about Tremain, the ODT’s cartoonist.

And hey, they’re the conservative media of the previous generation, it’s almost expected that they hold these views, just as it’s expected of Critic to call them out about it. As the Spinoff’s Madeleine Chapman remarked when responding to Witherow’s vitriol, “while we can’t respond to every person who has ever said something racist or sexist or homophobic, we can at least call them out when they do it on a public platform”.

In the end, making fun of the ODT is fun, and they are a genuinely important part of the Dunedin community. We at Critic don’t want it to go away, or worse, become the New Zealand Herald.