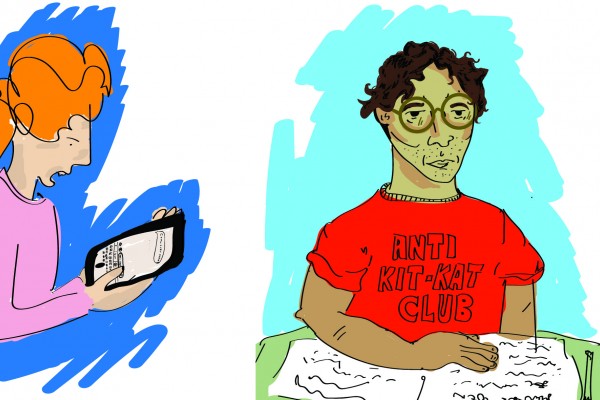 How To Find A Boyfriend

Alice is your typical depressed, thot 2nd year student. She’s never had a boyfriend, something to do with “focusing on her studies in high school”. However, it’s been fucking cold outside and with the plummeting temperatures comes an increased desire to spoon that random guy that sits across from you in tutorials.

Finding your match in the modern world can be hard. Hell, having friends is challenging enough without searching for someone that’s willing to see you naked, put up with your crippling alcoholism and listen to your conspiracy theories about Mamma Mia 2. So, Alice decided to share her search for love with Critic. Mainly because she’s my flatmate and if she doesn’t, I’ll stop buying milk.

Alice is skeptical on how well the quest will turn out, yet says, “I just feel like it’s the right thing to do. I should probably cross having a boyfriend off the list, right? Get it over with, you know? It’s just one of those things, like doing acid or losing your virginity; I should try it once, consider it a bucket-list thing. People seem happy when they’re in a relationship, right?”

When asked what she’s looking for in a man, she cackles wildly for a minute. “I guess, personality”. [She does a peace sign] Let the search begin.

This was the obvious place to begin; it’s a marketplace of single (hopefully), desperate (definitely) men. Signing up to the infamous app however, was trickier than anticipated. “It’s really difficult to find good pictures of yourself. You want the line between good pictures of you, but pictures that still look like you. It’s harder than you think. Lot of things to be weighed up, you know? The thot-to-funny ratio, reserved-to-outgoing, chill-but-has-interests. It’s a lot to consider when you only have two good photos of yourself, and they’re from 2015.”

After a bit of bitching, she finally made a profile. It had the classic “one group picture to make it look like I have friends, one picture from that random ball I attended in high school, and one selfie that doesn’t look like a selfie”. In other words, her bio was bad.

Alice started out being selective with her swiping, but when she realised that yes, the bar really was that low, she let herself go a bit more wild: “I mostly just judged them by their name - not in a racist way or anything. But it’s important that the names sound good together. Like you couldn’t have an Alice and an Alex. Alex is a good name, though.”

She got a lot of matches, but was skeptical of how genuine the interest really was: “I started out flattered, but realised that guys swipe right for every girl. It made me feel tired; it was exhausting.” Overall, Tinder just wasn’t for Alice. The conversations were bad, mundane at best, and the commitment was sucking time from our Love Island binge sessions. It was time for a new plan.

TRYING TO MAKE IT WORK WITH YOUR FUCK BUDDY:

Everyone’s had a friends-with-benefits arrangement of some sort. Perhaps you’ve been left with crippling commitment issues due to the breakdown of your high school relationship (but he said he’d love me forever?) and you can’t trust your tender heart to love again. A fuck buddy is great in theory, but then comes the inevitable: I guess either we have to break up or start dating now. Like any drunk girl with a cellphone, Alice wanted to push those boundaries.

She’d been “sleeping together with the guy for almost a year. Pretty on and off. He’s really out of my league and I was like, fuck, why not?” After sending a lengthy message along the lines of “Hey I like you lol” we waited with bated breath for the reply. Would she finally be rewarded with the title of Girlfriend, and be able to cuddle after sex? I was excited. She had promised to tell me every detail of what it’s like to be held by a man.

You can probably guess what happened. The poor guy just “didn’t want to be in a relationship right now”. And thus ended a year-long arrangement of drunken booty calls, all in the name of boredom and journalism.

Sources can’t confirm whether Alice was later spotted drunk texting him at the corner of a party a week later.

TALK TO SOMEONE IN A LIBRARY:

Things were getting desperate. It was time to resort to mankind’s greatest gift to singletons: public spaces. We chose the science library, because it was “cool, off the grid,” and naturally eliminated everyone who did either law or commerce. Alice wanted a boyfriend, not an STD.

She settled on a guy “average height to tall, brown hair, wearing round tortoiseshell glasses. Checked all the boxes on paper”. Unfortunately for Alice, it was that awkward time of the semester where there’s not many people in the library so there were a lot of spare tables. Meaning that she had to purposely choose to sit next to the guy, despite the clear abundance of space. It was fucking hilarious to watch, but for those wishing to try this technique, it would probably work better during exam time.

He smiled back, awkwardly.

We worked in silence for half an hour.

‘Hey want to take a break? Have a KitKat. I’m not being paid by KitKat to say this, hahaha.’

I ate my KitKat in silence, heartbroken. I don’t even like KitKats.

He stood up and left after another five minutes. I think it went okay.”

If talking to strangers isn’t your thing, then the ideal solution is to make a friend, and then emotionally manipulate him into liking you back. The best way to make friends? Joining an OUSA club.

Alice chose the debating society, mainly because it seemed like the least amount of effort. Having to actually learn how to play a sport, instrument or other shit was out the question, but talking large amounts of shit was something she already did on a daily basis.

We went on an overnight tournament near Timaru, which seemed like the ideal place to drink, flirt and lose yourself in the flowing ebbs of love. It was pretty slim pickings, with the men being all pretty much scrawny white National voters. However, despite what her grades say, Alice is a trier.

The tournament itself was a bit of a disaster. The clear highlight was someone carving “Alice and Caroline… No one actually likes you” into a desk. For the most part, the graffiti was probably right, no one did actually like us. At least not enough for Alice to land a boyfriend.

Alice was pretty relieved, saying: “It’s how you’d expect. Narcissists, all of them. Every last one of them, raging narcissists. Also not cool or good looking. Almost no redeeming characteristics. Maybe in like 15 years when they grow up and have good jobs, maybe someone will settle for them. I had to keep getting really drunk to be around them, so I was just known as the alcoholic of the group.”

However, weeks later she helped to deflower a Canterbury fresher she had met at the tournament. It was a touching moment. I heard everything. We all cried.

NUMBER IN A PUBLIC SPACE:

We had one last shot at the whole “not being alone forever” thing and Alice wasn’t about to waste it. It was time to bring out the big guns. It was an unconventional move. A fucking stupid move, one might even say. Yet Alice had to find a boyfriend (or buy a sex toy).

It’s the most classic technique in the book. A sharpie pen. A bathroom stall. A future of possibilities. She wrote her digits with a cheeky “Call me” at the bottom.

“I hope men don’t think I’m a prostitute. But then again, if anyone calls me expecting to pay, and then finds out I’m free, they’ll be even happier right? Although five bucks is five bucks. But I’m not prostituting myself. I’m just a girl, writing her number on a bathroom stall, hoping someone will love her. I know that’s a Notting Hill line but Julia Roberts plays the same character in every movie, so what the fuck.”

As of the time of writing, Alice had received three calls from unknown numbers. That’s three more calls than usual. Things are looking up. Who said love is dead?

Don’t be disheartened if you’re single at University. Some things just aren’t meant to be, like finding a parking space on campus, or actually going to Unipol. Just think, at least you’re not as sad as people that publicly fail in their attempts to find love. Thank fuck.