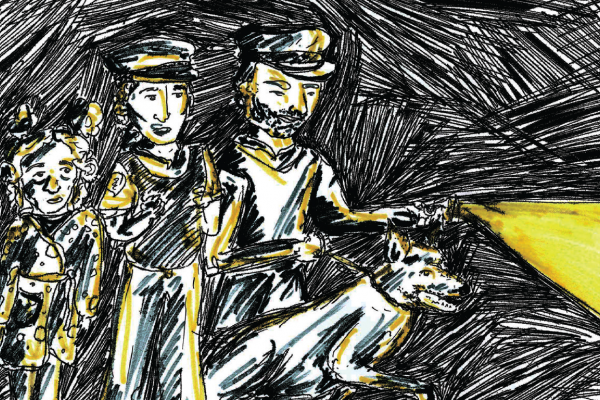 Put down your Billy Mavs, put away your study notes and buckle in because I am about to tell you the greatest story of all time.

It all started two months after a nasty breakup. I still missed my ex. I missed his eyes, his flakiness, his unwashed foreskin, his intense fear of commitment. I missed the smell of Lynx Africa and how he freaked out whenever I touched his bum.

So, because of this, every night I would sit on a quiet bench outside my hall alone and smoke through two fat joints. It was at this sacred bench that my journey began. One night at 3am I was sitting there as usual, wearing my leopard print dressing gown and slightly moldy ugg boots.

It was mid-way through my second joint when I saw something. Something dangerous. Unfortunately I cannot disclose certain information. What I can tell you though, is that someone’s life was in danger.

In my hazy state I realized what was happening and woke up my friend Al to come help. We followed the person/people involved into the entrance of the Botans. As we ventured deeper, we became afraid for our lives. We pleaded with the person/people involved to stop and come back. I threatened to call the police if they went further into the dark forest. They didn’t listen, bolting into the night. Well fuck. I whipped out my cracked iPhone and called the police as we walked back to our hall. I realized I had fucked up. Outside our hall waiting for us were four cop cars. And I was high as shit.

We were quickly interrogated about the situation. Cops and radios were everywhere. Red lights were flashing. I was trying my hardest to fake cry so I could blame my red eyes on crying. They wanted me to get in the back of their car and show them where I had last seen the person/people disappear into the Botans. Al, who realized the vegetative state I was in, quickly told them that she could take them. My pulse gratefully slowed.

“Actually we need youto show us, you were the one who made the call.” Panic brewed. Reluctantly I was placed in the back of the car. As I sat there, my heart in my throat I realized I had fucked up for the second time. I was in a car with two cops, three other cop cars were behind me, and I had a bag of weed nestled in the pocket of my dressing gown.

I’m a naturally paranoid person anyway, but the weed enhanced it. Shit. Shit. Shit. The other cop cars split off, sealing the other entrances to the gardens. It was just me, two cops in my car and a second car parked out the entrance. This is fine, I told myself. There were only two of them. I could act normal. I launched forward, my dressing gown flapping around me like a cape. “It’s this way!” I shouted as I marched into the bushes. “Wait,” a firm voice barked. I stopped in my tracks. “We have to wait for the handler,” one of the cops said. I turned around as a third police officer exited the second car. This one was different. He was covered in black padding and had a special vest on. He looked badass. Just staring at him gave me chills. He strode around to the back of his car and opened the boot.

It was then that I realized I had fucked up for the third time.

I had to hold the shit in my pants because what jumped out of the boot was a giant. Fucking. GERMAN SHEPARD. As it bounded towards me, my legs went weak. My vision swarmed. It’s going to smell the drugs. This is it. This is how it ends. As it got close enough to touch, I quickly reached out and started patting it. “Oh wow what a lovely dog.” “SO CUTE.” “SO FRIENDLY OH MY GOODNESS!” Its nose was getting alarmingly close to my burning pocket. I stifled a scream. Suddenly, the handler snapped back the leash, prompting the dog away and I finally exhaled.

Now, my tolerance to weed was still pretty low and this had all happened within the space of 15 minutes from when I had made the call. So I was still pretty fucking high, but it was quickly fading from the extreme stress I was feeling. I lead the charge. It was exhilarating. Torches illuminated the trees; radio static was humming in my veins. We reached the spot I had told them about. I did it. Thank god. I can go home.

It wasn’t safe, they said. I had to stick with them. So we walked, called out the name of the person in danger, walked some more. We continued on for a while. The dog was sniffing away looking for their scent. Sometimes it would circle back to sniff me and I would tense up again. But the handler would tug back on the leash and the dog would go back to doing its job. Finally, we found the person/people we were looking for.

Again, I can’t specify exactly what happened but I can say that a taser was pulled out and clothes were searched for weapons. It was an intense moment. One I would have found scarier if I wasn’t so focused on the leftover pizza in my room. Finally, we had successfully rescued the person. I was basically a hero. Me smoking weed that night had unintentionally saved the day. But because I knew the person we had saved, I was now allocated the role of support person. So, I couldn’t go home. I had to get back into the police car and go to the hospital. The person was checked out and they were fine. The situation was being resolved. As I patiently awaited the results, I stepped out into the hospital car park.

You know what I deserved? A fucking joint.

So I rolled one, smoked it and patted myself on the back for a job well done.

This was the fourth and final time I realized I fucked up.

After smoking and washing my hands, I exited the bathroom and ran into a detective who offered us a ride home. I politely told him no thank you. He insisted. So this time I had to climb in the back of the detective’s car. If he smelled the weed, he didn’t comment. I still had the drugs in my pocket. Therefore, the detective was transporting drugs. I giggled at the thought. Once we arrived back at the hall, I had to relay the events of the night to hall security and the head of hall. As the sun rose, I was finally allowed to go to my room. I crumpled into my bed, grateful I survived the night and wasn’t caught. Later the next night I struggled to sleep.

Luckily I knew what would help.

I went to my bench and lit up a joint.