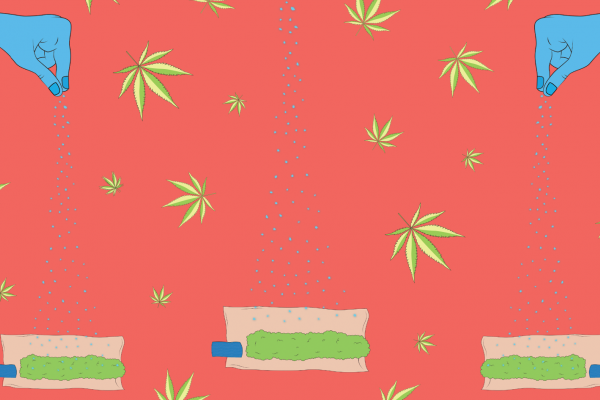 I Accidentally Smoked Laced Weed and It Fucked Me Up

Weed is fucking terrifying.  Not a statement that you hear very often as for most people who use the drug it is a relatively positive experience, for me however this is not the case. Here is my story of a 2-day drug trip that has put me off any other illicit substances for life, which started with just some weed, a bong, and trouble sleeping.

It began when I was telling my flatmate about the trouble I was having sleeping, I was tired and desperate to try anything. He recommended that I try some of his weed that he used, fuck it, I’d tried a bit before but never really felt anything so decided to give it a go. We went outside, had a few cones and headed back into the flat. Everything was going well, until I went to get some water, and it floated up to the ceiling. This is where shit started getting weird.

I told my flatmate that I wasn’t feeling the best and that I should go to bed, he agreed and so I went to my room and turned off the light. The room was dark except for the dim, purple glow of the lightbulb. Suddenly it started to have flecks of gold, and it grew brighter and brighter until I realised what I was seeing, I was staring directly at God. He/She didn’t say much, obviously not a big conversationalist, but I knew I’d fucked up. The outline of my room and its contents began to glow fluorescent blue, despite the room being pitch black. I thought I had died, and it was the worst feeling I’ve ever had. I couldn’t breathe, and I was freaking out, thinking that this would be the rest of my eternity.

Excerpts of what was going through my head include “Holy shit I’ve died, Mum’s going to fucking kill me,” “Maybe I should Google how not to be dead, but then they’d know that I’m dead,” and “Archduke Franz Ferdinand is behind everything, I finally understand”. Eventually I had the idea of turning my light back on and everything went back to normal, I was in the clear. That was until the tiger came out of my wall. There are few justifiable reasons for shitting yourself as an adult; I think seeing that is most definitely one of them (for the record I didn’t shit myself). Then it turned into a dog, a horse and a cow among other common animals. The cast of Back to the Barnyard eventually fucked off out of my room and I got a bit of peace. However, this nightmare had lasted the whole night and it was time to get ready to go study, at least it was over though. I jumped into the shower, and the water started going up. Fuck.

I got myself to the library to study for exams and decided to have a wee break before I got into it. 10 minutes later my mates asked me if I wanted to go grab some dinner. We got to the library at 9am; I’d stared at my screen for nearly nine hours, completely wiped out. Safe to say that I got stuff all done that day. I went back to my flat, couldn’t understand anything that was happening around me and tried to sleep. It didn’t work, because I did manage to get to sleep, but with the unfortunate side effect of sleep paralysis. Sleep paralysis sober is already awful, but have you ever had it when you’re tripping balls? That shit will really fuck with you. I couldn’t shake the feeling of dread and the occasional hallucination until the next day. The worst part was that all I wanted to do was to get some sleep, but instead was awake for two days, absolutely bloody cooked. My flatmate though? He got one of the best sleeps of his life.

This was enough to put me off taking drugs, but I know you absolute breathers love the occasional drag on the Broccoli among other things. Just make sure that you know what you’re doing, make sure your mates are close, and keep an eye out for ol Archduke Franz, I still reckon that fucker’s up to something.