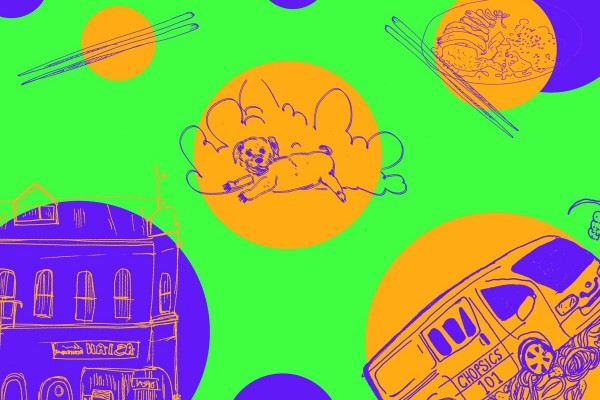 Chinese food is amazing. Simply relegating the entire genre to two words is a grave injustice. Anthony Bourdain said you can spend a lifetime studying Chinese culture and you won’t even scrape the surface. In Dunedin we are lucky to have a few good Chinese restaurants whilst having the ethnic diversity of a Christchurch pub when the Crusaders play. But which Chinese restaurant is best?

Despite the woeful attempt to make their restaurant vaguely university-related, which is plainly ridiculous, Chopsticks 101 is a fine establishment. The food prepared by the vast armada of cooks visible from the dining room can be excellent, depending on what you order. But what really sets Chopsticks 101 apart from the standard run-of-the-mill Western/Chinese restaurant is the fantastic service. Annoyingly however, there are no classes on the use of chopsticks, which for the beginner can be likened to trying to swim with your fingers spread apart. Really, like drinking, it’s something you will get better at the more you do it, eventually becoming a full-blown Dunnaz breather, or an elderly Chinese woman.

In the way that most Chinese restaurants look to Westerners, Chopsticks 101 looks rather dodgy from the outside. Again, the suspiciously good-looking pictures of succulent Chinese meals are not encouraging. However, if you look closely on most days at peak times you will see the place packed with Chinese people, including tour groups of Chinese travellers led by the chap in the Highlanders jersey who is undoubtedly an absolute legend on the lash. Whenever you venture to eat ethnic food and there are people of that same ethnicity in the restaurant of choice, this is invariably a good sign.

Upon entry, it still seems pretty dodgy. But the lovely staff will quickly seat you and give you menus. If you go to Chinese restaurants and order fried rice or stir-fried noodles then stop reading this article now, return to Mosgiel and only leave once you are ready to push the waka out. When it comes to food at Chopsticks 101, the more adventurous you get the better it tastes. On a dusty Sunday nothing goes down like a beef hotpot - a delicious soup bought to the table over an open flame packed with slices of beef, vegetables and noodles. Add some of the chilli found in the jar on the table and turn your meal into a real Assyrian Arse-Blaster to rid yourself of any remnants of a hangover.

If you’re planning on taking your waka out over open ocean, to navigate by the stars in the hope of finding new lands to settle, go for some tripe (the stomach lining of a cow which, like a lot of Chinese meals, looks like the last thing you would want to eat) or chicken feet. Also good is Chairman Mao’s Pork Belly. For a few days it seemed that they were going to have to rename it to Chairman Peters’ Pork Belly. If you’re unsure about what to order, ask the staff, they are very attentive and always happy to help.

You do not venture to Chopsticks 101 for a quiet date on a Thursday night. At peak times the place is lit up by Chinese news shows and the room gets quite humid. Also, do not be alarmed when Chinese people who turn up after you get their food first. Life isn’t fair, and the Chinese stay true to their own. Being a Westerner in a Chinese Restaurant can be likened to the feeling of insignificance one experiences during an earthquake. The earth could destroy you right now and there is absolutely nothing you can do about it. Really, your life doesn’t matter at all in the scheme of things.

All in all, Chopsticks 101 is a great benchmark for eating Chinese food in Dunedin, great location, a bit on the pricey side but still reasonable, made up for with very good food.

It always seems to look shut, even though it occupies such a grand spot on George Street. We tried to get in one Saturday night to be greeted by a rather hostile Chinese man and a young Chinese woman holding a very cute puppy. They told us to leave immediately and that we could not stand on the street outside or pet the dog. Blue Sky Restaurant is more of a fortress than a restaurant, leading Critic to believe that it is a brothel, or some sort of front for the Triads. Best stay away from there if you know what’s good for you.

The Asian is the quintessential Chinese (I think) BYO restaurant in Dunedin, since Chopsticks 101 obviously can’t be bothered putting up with gaggles of drunken lunatics. Again, not the most appealing looking place from the outside (or inside for that matter) but the food was good. The best part: it is really cheap.

Do not go to the Asian if you have Obsessive Compulsive Disorder. Indeed, it seems the owners are still confused about what sort of restaurant they want to run. As were we, when we were given the menus. Looking around at the décor there seemed to be a Japanese flag type painting on the wall, which rather pissed me off. Dunedin seems to have a lot of “Asian restaurants” serving an amalgam of different meals from various countries all under one roof. That’s annoying. The Asian is more or less Chinese with a few other bits and pieces thrown in.

It’s already really hard to make choices in Chinese restaurants since most have very long detailed menus. The Asian is no exception. It has 264 fucking options on their menu! Don’t go there if you have some sort of terminal illness, because you’ll simply run out of time!

When we finally got around to making decisions, the Asian really did shine. We were able to order a good variety of food (five dishes, due to the excellent pricing). And the food did not disappoint. When the nice lady delivered the food, she offered us chilli and seemed surprised when we replied in the affirmative. She bought it over smirking, which I actually appreciated. We went for some sort of beef and eggplant thing in a nice sauce seeing as eggplant is more expensive than gold at the moment. A good indicator of a Chinese restaurant’s quality is the deep-fried squid. The Asian’s was not fresh, nor did they serve the tentacles that other places serve, a real down mark. My date got something very white and average, which I shall not dwell on, he is from Christchurch after all, whose rugby team celebrates a group of religious extremists who raped and pillaged a large portion of the Middle East.

The food at the Asian is quite hit-and-miss, you get what you pay for unless you strike it lucky with your one in 264 chance. It would be a fantastic BYO spot, being very close to the Octagon and it does serve good food when you consider the prices.

Papa Chou’s can be found on Stuart Street near the Octagon. However, as I shall explain, you do not need to venture so far away from North Dunedin to enjoy its excellent food.

Entering Papa Chou’s can be compared to being on an acid-fuelled journey, morphing in and out of a world full of hobbits and Chinese dragons. Passing through the foyer into the dining room takes you through a big round doorway that instantly conjures feels about Hobbiton. You also walk past a projector screen. On this occasion, it was showing an old movie about golf with Chinese subtitles. Very weird. Being in the dining room was also like being in a Hobbit hole, dark and a bit of a dungeon. This feeling was not assisted by the radios and earpieces worn by all the staff, making them all look like secret agents. Am I here for a meal or am I going to be interrogated? Maybe they are talking to Xi Jinping himself as he plans for the conquest of New Zealand.

Suspicions were first aroused when I recognised two of the waitresses from Chopsticks 101. After glancing at the menu, which did not contain pictures and mercifully was very brief, they were confirmed. Seeing Chairman Mao’s Pork Belly was the giveaway. Papa Chou’s is Chopsticks 101’s slightly more elegant and restauranty cousin.

Thus, I was not surprised when the food was exquisite. The deep-fried squid was the dog’s bollocks. Crispy, fresh tentacles smothered in batter and oily goodness. Also, Papa Chou’s does yum cha, small portions of dumplings among other things, allowing you to order a variety of food for a reasonable price. The shrimp dumplings I had were simply a delight. If you really want to push the waka out, on the menu there was a meal that consisted of a soup containing duck’s blood and sliced spam.

All of a sudden, a bunch of Chinese women in puffer jackets came in and started walking upstairs. What is upstairs? The interrogation rooms? The staff started going a bit nuts and became a bit frantic. No idea why. One woman broke off from the group and started taking pictures of the psychedelic dragon statues in the foyer (which look like they were painted by a four-year-old). She proceeded to circle the dining room we were in, taking photos of numerous other elements of the décor. This was very strange seeing as she was in a restaurant proclaiming to serve the food and represent the culture of her homeland.

Papa Chou’s point of difference is that it does do BYOs, but seems to be a bit more expensive than Chopsticks 101. It is very close to the Octagon and could make up for Chopsticks 101’s lack of grog deletion capability.

Although very out of the way, it makes up part of Dunedin’s “karaoke precinct” due to being near Vivace. I won’t dwell on the food because that is not why I ended up at Hong Kong restaurant. It has its own private karaoke rooms! We stumbled in at about 1AM and sung our hearts out until they eventually got pissed off with us for some reason and told us to leave. Definitely worth a visit as an alternative to Vivace, where you not only have to sing in front of a multitude of people and have to sit through the painful eight-minute rendition of Stairway to Heaven by a stupid middle-aged man.

The winner is Chopsticks 101. Friendly service is rare in Chinese restaurants, making Chopsticks 101 an excellent exception. Though evidently there are numerous variables when it comes to choosing a Chinese restaurant, your preferences will also depend on your intrepidness and whether you’re a farmer from Milton. When it comes to Chinese in Dunedin, there really is something for everyone.